Accessibility links
Tourism Threatens China's Piano Island A musicians' enclave, a tiny island boasting the highest per capita concentration of pianos in China, is struggling to find its place in an increasingly commercialized nation. 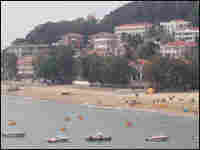 A musicians' enclave, a tiny island boasting the highest per capita concentration of pianos in China, is struggling to find its place in an increasingly commercialized nation.

The cobbled streets of Gulangyu are narrow and winding, lined with ivy-covered pastel houses and graceful willow trees, home to hundreds of songbirds. Everyone walks — no cars or bikes are allowed.

It would be hard not to make beautiful music in such a beautiful place. But there are signs that this little musical utopia is yielding to outside pressures. Gulangyu has preserved its musical traditions for generations, through foreign occupations and political repression – but the latest battle is of another kind – tourism.

"These days I see a lot of people selling things," says Yin Chengdian, a musician on the island. "It's all hustle and bustle."

Even the island's name, Gulangyu, is musical — it means Drum Wave Island. Locals named it after the sound of the waves that crash into caves along its craggy shore.

The tiny island is a quick ferry ride from the coastal metropolis of Xiamen, which used to be a foreign treaty port. Gulangyu's first pianos arrived when the port opened in the mid-1800s — Christian missionaries brought them for the churches they built here.

China has exported goods through Xiamen for centuries.

If tiny Gulangyu exports anything, it's pianists. Many of China's best were born and raised on this tiny isle.

The Yin family, for example, has been called Gulangyu's "First Family of Music." World-renowned pianist Yin Chengzong lives in Manhattan now, but calls Gulangyu home. His brother, Yin Chengdian, founded the Music School in Gulangyu and has lived on the island for almost 70 years.

"This is the Gulangyu song," says Yin Chengdian, listening to music. "It's about how beautiful it is here, how if you stand on the top of the hill you can see forever."

But as tourism takes hold, the atmosphere is changing. Dozens of souvenir shops, new hotels and a McDonald's line the narrow main streets. Visitors from China and beyond crowd onto the island every day.

"In my student days, before I retired, all that wasn't so popular yet," Yin Chengdian says. "There were more family recitals then, and the schools had more performances."

Those informal family recitals still happen, once in a while. On this particular evening, 23-year-old professional pianist Fang Si Te plays a four-hand duet in her living room with one of her young students.

"Probably while I was still in my mother's stomach I already had special feelings about music," says Fang Si Te. "When I started playing I was just having fun, I tried lots of instruments. Then I just fell in love with the piano."

When she's not teaching or studying, she works as a guide at the island's piano and organ museums, demonstrating the rare instruments for tourists who pass through.

"These days, with the economy developing, many people aren't as interested in classical music," Fang Si Te says. "If they play, they don't play for music's sake — they play because they think later they can make a lot of money teaching."

Gulangyu pianist Huang Sanyuan makes his living at the intersection of art and business — he manufactures pianos for export.

He has some interesting side projects, too. His latest is a piano-shaped music box to market to Gulangyu tourists, and a rather unique tourist attraction.

"I'm planning an exhibit at my factory on how pianos are made," Huang Sanyuan says. "It'll be like the Underwater World. There's a long glass corridor where people can walk through and look through the glass and watch the pianos being made. Pianos have 300 years of history, but a lot of people still don't understand how they work. I'm hoping this will support the music business here."

His plan is for another mode of commerce, one of many breaking steadily along this island's shore.