Accessibility links
Are Doctors The Problem With Health Care? President Obama spoke to the American Medical Association Monday. He acknowledged that doctors are critical to health care reform. Doctors have come under fire for driving up the cost of health care by ordering unnecessary tests and treatments to make an extra buck.

President Obama spoke to the American Medical Association Monday. He acknowledged that doctors are critical to health care reform.

Doctors have come under fire for driving up the cost of health care by ordering unnecessary tests and treatments to make an extra buck.

Dr. Sherwin Nuland, clinical professor of surgery, Yale University School of Medicine and author of The Soul of Medicine

The Trials Of Paying For Health Care In A Recession

The Trials Of Paying For Health Care In A Recession

At Howard County General Hospital in Maryland, two patients had drastically different experiences. One owes $50,000 after he had a heart attack and didn't have insurance. The other, who has insurance, is getting nearly everything paid for her after she was diagnosed with breast cancer. Katie Hayes/NPR hide caption 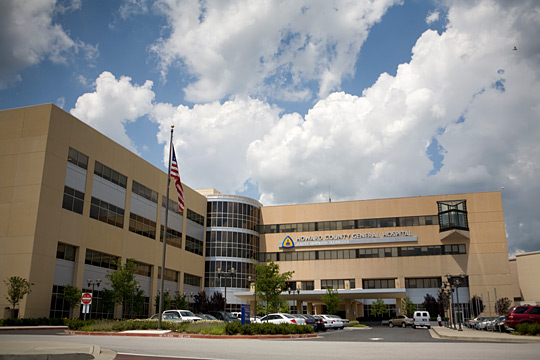 At Howard County General Hospital in Maryland, two patients had drastically different experiences. One owes $50,000 after he had a heart attack and didn't have insurance. The other, who has insurance, is getting nearly everything paid for her after she was diagnosed with breast cancer.

Have you had difficulties paying health care bills? Share your stories in the comments section below.

With health care overhaul back on Washington's agenda, NPR went to one locale to see how the big national issues play out there. In Howard County, Md., near Baltimore, we spoke with patients, doctors, administrators and employers about the costs of health care and access to the health care system.

Howard County is not typical: It's rich. It's progressive. The Maryland state government sets hospital fees. The local hospital is part of the elite Johns Hopkins system. And last year, the county itself launched its own program for the uninsured. If health care reform can work anywhere, it should work here.

But like the rest the country, Howard County is facing the impact of the recession: Employers have to cut back on benefits, so employees cut back on their coverage.

Herb Huston, 61, was in a semiprivate room at Howard County General last month. Until that week, he had seldom seen the inside of a hospital. He was in the hospital for the first time in 1956 for a tonsillectomy and again in 1973 for injuries from an auto accident.

Herb worked as a computer programmer from the late 1960s until 2005 on everything from huge mainframe computers to personal computers and "quite a few things in between," he says.

Huston says he always had health insurance and contributed premiums for years but hardly ever filed claims against it.

Then, in his late 50s, Huston was laid off. For 18 months, he was covered by COBRA. But then his COBRA expired. Huston knew that he needed another health insurance policy.

"I was beginning to search around for a replacement plan when the current economic crisis hit," he says. "And instead of taking on new expenses, I had to desperately trim back my already existing expenses. The luckiest item for me was that I actually paid off my mortgage in August of last year."

The unluckiest was what happened one Saturday night in May. Huston says he was home and took an after-dinner nap. He awoke at 10 p.m. with "pretty acute chest pains."

He knew it was a heart attack. He called 911 and was rushed to the hospital, where he received a cardiac catheterization. Three days later, he was in good spirits, completely satisfied with his treatment and trying not to think about the cost, which should easily exceed $50,000 — a cost he is now responsible for.

"The various insurers for my employer got a real bargain from me," Huston says.

"And the thing is, this is going to be continuing," he says. "I've gone from someone who had very little interaction with the medical profession to the complete opposite."

On the other hand, 62-year-old Judy Weeter of Ellicott City, Md., was also treated at Howard. The divorced mother of one grown child was diagnosed with breast cancer in February.

"I pay no premium, none. I'm one of the few fortunates — that is one of the benefits of where I work," says Weeter, who is an executive assistant for a search firm that places government contractors. "I have no monthly copayments for my health insurance. That was a marvelous plus of this job I have."

At Maryland Oncology, Weeter was getting her second chemotherapy treatment. She already had a lumpectomy and she expects radiation treatments after the chemo. And the cost to her, she says, will probably be nothing other than her $20 copays.

"I'm starting to get those reports back from my health insurance and I'm seeing the many many many many thousands of dollars being spent on me and I've had one treatment and two surgeries," Weeter says. "It's incredible. I'm blessed. I know it."

Most people in Howard County are somewhere between Weeter's situation at the top of the scale with perfect insurance coverage and Huston's at the other end with no coverage at all. But because of the recession, a lot of people have reduced their coverage.

The Burden Of Costs

Linda Faggio administers the oncology practice where Weeter gets chemo. She says she is seeing an increasing number of patients who are underinsured and can't afford adequate coverage.

"The burden of the cost of that is now their own," Faggio says. "They may have a $5,000 or $10,000 deductible and that's the only way they afford coverage at all. No one anticipates that they're going to be diagnosed with cancer. It's not unusual to have a dose of chemotherapy being several thousand dollars a dose up to even $10,000 a dose."

Lisa Jolles, a Howard County insurance broker, says her clients — the employers — have typically experienced huge losses of business in the recession.

"A lot of them, their thinking is, 'The employee may have to pay more for the health plan, but they still have a job,' " Jolles says.

One of her clients is Lin Eagan, who employs 15 people at Lakeview Title in Columbia, Md. They do mortgage closings. There's been a rare bright spot in the business lately — homeowners are refinancing en masse, so there are closings once again.

But when the residential real estate crashed, Eagan cut her staff, and she went from paying 100 percent of her employees' health insurance to a 50-50 split. There are also higher deductibles that are covered in part by health savings accounts.

"In 2008 we didn't know what hit us, so of course we needed to make adjustments for the economy," Eagan says. "Every business did. Obviously we needed to look at cuts in the payroll. In our whole budget, health care was a big number."

"That's a number that becomes unsustainable especially when the economy starts to contract," she says.

Small businesses like Eagan's have been making similar decisions in Howard County and all over the country. Workers who are laid off get COBRA and without a new job could end up uninsured. But workers who keep their jobs face steeply increased premiums as the burden shifts to them, and they take cheaper options and risk being underinsured.