Accessibility links
Scientists Debate Shading Earth As Climate Fix The National Academy of Sciences is discussing the risks and potential benefits of manipulating the planet's atmosphere — such as spraying fine particles into the stratosphere to shade the Earth — as a way to counteract global warming. But all potential strategies are fraught with uncertainty. 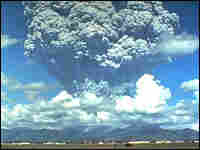 Volcanic eruptions, like this blast from Mount Pinatubo in the Philippines in 1991, send sulfate particles into the air. These particles reflect part of the sun's radiation and have a cooling effect on the Earth. Scientists are debating whether spraying tiny particles into the stratosphere could help combat climate change. Dave Harlow/USGS hide caption 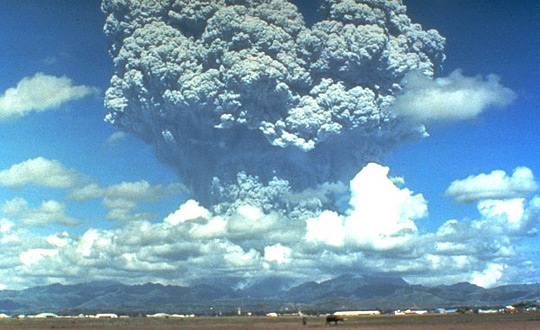 Volcanic eruptions, like this blast from Mount Pinatubo in the Philippines in 1991, send sulfate particles into the air. These particles reflect part of the sun's radiation and have a cooling effect on the Earth. Scientists are debating whether spraying tiny particles into the stratosphere could help combat climate change.

Engineering our climate to stop global warming may seem like science fiction, but at a recent National Academy of Sciences meeting, scientists discussed some potential geoengineering experiments in earnest.

Climate researcher Ken Caldeira was skeptical when he first heard about the idea of shading the Earth a decade ago in a talk by nuclear weapons scientist Lowell Wood.

"He basically said, 'We don't have to bother with emissions reduction. We can just throw aerosols — little dust particles — into the stratosphere, and that'll cool the earth.' And I thought, 'Oh, that'll never work,' " Caldeira said.

But when Caldeira sat down to study this, he was surprised to discover that, yes, it would work, and for the very same reasons that big volcanoes cool the Earth when they erupt. Fine particles in the stratosphere reflect sunlight back into space. And doing it would be cheap, to boot.

Caldeira conducts research on climate and carbon cycles at the Carnegie Institution at Stanford University. During the past decade, he said, talk about this idea has moved from cocktail parties to very sober meetings, like the workshop this week put on by the National Academy of Sciences.

"Frankly, I'm a little ambivalent about all this," he said during a break in the meeting. "I've been pushing very hard for a research program, but it's a little scary to me as it becomes more of a reality that we might be able to toy with our environment, or our whole climate system at a planetary scale."

Attempting to geoengineer a climate fix raises many questions, like when you would even consider trying it. Caldeira argued that we should have the technology at the ready if there's a climate crisis, such as collapsing ice sheets or drought-induced famine. At the academy's meeting, Harvard University's Dan Schrag agreed with that — up to a point.

In reality, carbon-dioxide emissions globally are on a runaway pace, despite rhetoric promising to control them. University of Calgary's David Keith suggested that we should consider moving toward experiments that would test ideas on a global scale — and do it sooner rather than later.

"It's not clear that during some supposed climate emergency would be the right time to try this new and unexplored technique," Keith said.

And experiments could create disasters. Alan Robock of Rutgers University cataloged a long list of risks. Particles in the stratosphere that block sunlight could also damage the ozone layer, which protects us from harsh ultraviolet light. Or altering the stratosphere could reduce precipitation in Asia, where it waters the crops that feed 2 billion people.

Imagine if we triggered a drought and famine while trying to cool the planet, Robock said. On the plus side, it's also possible that diffusing sunlight could end up boosting agriculture, he said.

"We need to evaluate all these different, contrasting impacts to see whether it really would have an effect on food or not," he said. "Maybe it's a small effect. We really don't know that yet. We need more research on that."

Thought experiments to date have focused primarily on the risks of putting sulfur dust in the stratosphere. There are many other geoengineering ideas — like making clouds brighter by spraying seawater particles into the air. But none of them is simple.

"I don't think there is a quick and easy answer to employing even one of those quick and cheap and easy solutions," said social scientist Susanne Moser.

There's no mechanism in place to reach a global consensus about doing this — and a consensus seems unlikely in any event. Who gets to decide where to set the global thermostat? And will this simply become an excuse not to control our emissions to begin with? These were all questions without answers at the academy's meeting.