Accessibility links
Schwarzenegger Sticks To 'No New Tax' Promise California's controller said last week that the state is less than 50 days away from, in his words, a government "meltdown." Gov. Arnold Schwarzenegger remains adamant that his approach — major spending cuts and no new taxes — is the only way to go. 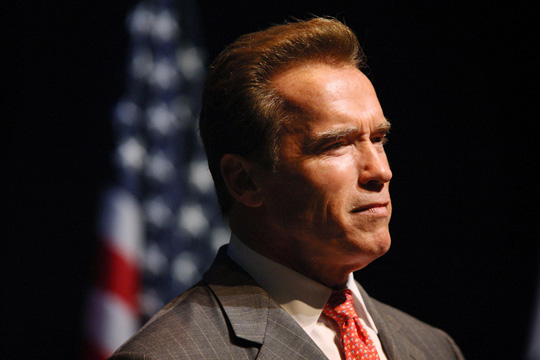 Gov. Arnold Schwarzenegger speaks on the status of California's budget earlier this month.

Where The Ax May Fall

California faces a $24.3 billion budget shortfall for the fiscal year beginning July 1. To address the deficits, Gov. Arnold Schwarzenegger has proposed deep cuts to many areas of the budget for the coming year.

Some of the most controversial proposals include:

The faltering economy has wreaked havoc on California's delicate budget balancing act. The latest figures from the California State Controller's office show a decline in all three of the state's largest revenue streams:

In California, there's still no political deal in sight in the struggle to close the state's massive budget deficit.

The clock is ticking. The state's controller said last week that California is less than 50 days away from, in his words, a government "meltdown."

Even so, Gov. Arnold Schwarzenegger remains adamant that his approach — major spending cuts and no new taxes — is the only way to go.

'The Will' To Cut The Fat

Four weeks ago, California voters rejected a package of ballot measures that might have minimized the state's budget problems. But in an interview Monday at the state Capitol in Sacramento, Schwarzenegger made it clear that he thinks the Legislature is dragging its feet on his $24 billion proposal to erase the deficit.

But few believe there's enough waste to solve California's massive problem. Even the governor's own budget director said recently that Schwarzenegger's plan to cut some $19 billion in spending is scraping the bottom of the barrel.

Democrats in the California Legislature want only about $13 billion in cuts and have rejected some of Schwarzenegger's most drastic measures. That includes his plan to abolish both welfare assistance and health care for children from poor families.

Still, Schwarzenegger says if Democrats would only re-examine some of the spending demanded by labor unions and others, they could save programs like welfare (known as CalWORKs), state parks or financial aid for college students.

What Schwarzenegger says he will not do to solve California's financial meltdown is raise taxes. Democrats have now proposed a tax on oil drilled in California and a $15 annual tax on vehicles, earmarked to fund state parks.

Last year, both a handful of legislative Republicans and the Republican governor agreed to about $12 billion in new taxes. But Schwarzenegger says that was a one-time deal.

"No more taxes, because I said to them, 'Look, I go there this time. But everyone has to understand: We'll never go back again,' " Schwarzenegger says.

And time for debate is running out. California is on the verge of being $1 billion short of cash next month and billions more by the fall. Issuing IOUs is a very real possibility.

The plan is a short-term loan from Wall Street, with the debt backed by the federal government. But Tuesday morning, White House press secretary Robert Gibbs said the Obama administration has no plans to step in. That means Schwarzenegger — who has staked his reputation on fiscal common sense — will apparently have to do the heavy lifting himself.