Accessibility links
The Mexican Institute Of Sound Returns Soy Sauce, from the Mexico City-based Mexican Institute of Sound, pushes eclecticism to a new level. It combines mariachi with hip-hop, rock and electronica. Tossed in are elements from political speeches and the barnyard. 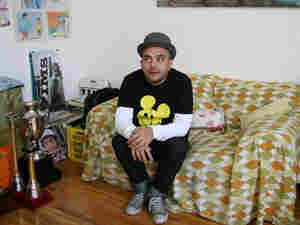 The Mexico City-based Mexican Institute of Sound consists not of an "institute," or even a band, but rather of just one man: Camilo Lara. Getty Images hide caption

Lara's new album, Soy Sauce, is the talk of the alternative music scene in Mexico City. It pushes eclecticism to a new level by mixing mariachi with hip-hop, rock and electronica, while some songs feel reminiscent of '80s British New Wave. There's a love song, "Te Quiero Mucho," which disintegrates into the braying of barnyard animals. He has a Mexican pop star, Paty Cantu, who usually sings soulful love songs in Spanish, appearing in a hip-hop tune in English.

Lara's album is multilayered in both sound and meaning. Even its title is a play on words. "Soy Sauce" can be read either in English or Spanish with completely different meanings. In Spanish, soy sauce means "I'm a willow tree."

Some of the songs are whimsical, while others are political. But Lara never takes himself too seriously. The most popular song from Soy Sauce, "Yo Digo Baila," is a bilingual call to get out on to the dance floor.

Some versions of this story heard on air attributed "Bittersweet Symphony" to The Rolling Stones. In fact, the song was recorded by The Verve.