Accessibility links
Social Networks: They're Popular, But Will They Pay? Since last August, Facebook has doubled its user base to more than 200 million active users. The hope is that all those users will translate into millions of dollars in ad revenue. But turning a profit can be tricky business on the Web. 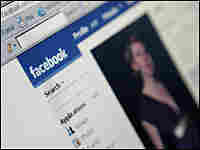 I knew Facebook was big when my 85-year-old father joined.

Since August of last year, Facebook has doubled its user base to more than 200 million active users. The common wisdom is that all those users will translate into millions of advertising dollars.

But when you talk to Facebooker Jill Clapp, you can see why that might not be true. Like most users, Clapp signed up to stay in touch with friends.

"It's a nice way to hear what's going on without being too intrusive into people's lives," says the 42-year-old.

Clapp says staying in touch with friends is nice, but the ads are driving her nuts. She says the algorithms that serve them up make a lot of assumptions based on her age and gender.

"You're over 40," she says wryly, and "you want Botox injections; you need NutriSystem."

Clapp, a down-to-earth elementary school teacher and musician, opens up her page and laughs as she looks at an ad for a game called Sorority Life.

"Hottest games for hottest girls," reads the teaser copy. "Take a cruise at the mall."

"Not in the least bit appealing to me," she says.

Social-networking veteran Denise Paolucci says this is the big problem with selling ads on social networks. People are there to socialize, not to shop.

"Just like if you're at a cocktail party and mingling with people having a conversation, you're not going to want to be interrupted by somebody jumping in and shouting, 'Hey! Free widgets!' " she says.

Facebook thinks it can solve this problem by giving users the chance to rate ads, with a thumbs-up or thumbs-down. Mike Hoeflinger, the company's director of product marketing, says that over time the service will be able to figure out which ads actually interest each user.

"There's constantly the discovery of a better way to target," he says.

Paolucci doubts it. She points to MySpace, which is starting to lose users. "People were willing to pay so little to advertise on MySpace that they had to keep adding more ads."

'People Will Pay For Good Technology'

There's another name in social networking expressing skepticism about making money with ads — a big name.

"I think it's probably the least interesting thing we could do," said Twitter co-founder Evan Williams at a recent conference.

But for all the hype around it and its tremendous growth, Twitter still isn't profitable. And Williams thinks the best path to making money is to sell services such as user verification.

He lays out a scenario: A new user stumbles on a Dunkin Donuts Twitter feed.

"First thing you want to know is, 'Is this really Dunkin' Donuts?' " Williams says. Twitter, he posits, could charge Dunkin' Donuts to offer verification of their identity.

Fred Stutzman, who studies social networks at the University of North Carolina, thinks charging for services will turn out to be the best way for social networks to get profitable.

He points to the professional networking site LinkedIn. It offers some free services, but users pay for a premium level with more features. With only 40 million users, LinkedIn is significantly smaller than Facebook or MySpace, but it's making a profit.

Facebook, though, may face a bit of a conundrum. There are two groups on the site called "We Will Not Pay To Use Facebook. If This Happens We Are Gone." Their combined membership? Nearly 8 million.

Stutzman thinks that ultimately Facebook, MySpace and Twitter are going to be around for a long time. They just might not be the big cash cows that some people expect.