Accessibility links
Standing In My Father's Shoes Youth Radio's Jordan Monroe has been thinking about Father's Day. He's not the sentimental type, but events in the past few years have changed his outlook on fatherhood. This is his story. 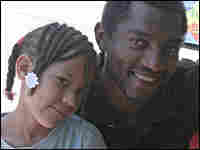 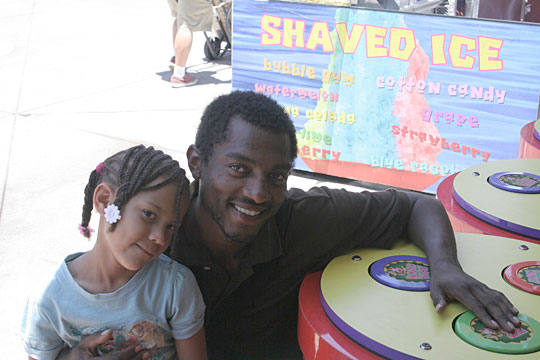 Jordan Monroe and his daughter, Jolie. 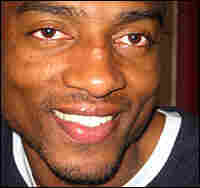 Youth Radio's Jordan Monroe has been reporting since the age of 16. Some of Jordan's interests include cultural diversity, music and history. He lives in Los Angeles and is pursuing a communications degree. Courtesy of Jordan Monroe hide caption

My dad and mom separated when I was 3 years old. I can still remember the day my mom left him standing in the driveway of The French Quarter, a Creole restaurant he and my mother built and ran in Alameda, Calif. He was wearing a light-colored shirt and stood watching as I waved back at him through the car window. It was as if it were a normal goodbye.

But after that day, my mother and grandmother didn't make it easy for my dad to see me. I remember asking myself all these questions: Where is he? Why doesn't he come pick me up? Doesn't he know where we are?

My grandmother made her opinions clear. She didn't like my father. "Your daddy ain't never done nothing for you," she would say whenever I mentioned his name. Well, he didn't give me anything for my birthday, I thought. Maybe she was right.

What I didn't know then is that I would come to understand my father when I became a dad. My longtime girlfriend and I had a baby when we were young: I was 21 years old. A few years later, we separated. I went from kissing my daughter goodnight and being woken by her jumping on me in the morning, to dropping her off at her mom's house and giving her goodnight kisses over the phone

My daughter's mother seems to resent me the same way my grandmother resented my father. When I started noticing my daughter developing a bad attitude toward me, I heard my grandmother's voice in my ear: "Your daddy ain't never done nothing for you."

Standing in my father's shoes, I was able to see things more clearly. My grandmother's opinion about my dad was just that — her opinion. And it was shaped by her own dysfunctional relationship with her father.

I'm determined to redefine fatherhood in my family. My daughter adores me, and her love isn't based on what she thinks a father should be, it's based on what her father has been — there for her.

When we spend a weekend together, she often says, "I love you." But it's the look she gives me that eternally confesses her feelings. I look at my father the same way now that I know he was thinking about me all those years we were apart. I no longer see a man who did nothing for me my whole life, but a man who has always loved me.

After all, he's my father; just as I am hers.