Accessibility links
The Costs Of Health Care: Finding Ways To Save In Howard County, Md., health care providers are seeking ways to save costs. Howard County General Hospital's CEO says getting people to go to primary doctors instead of the emergency room is one way. Other doctors say costs can be saved through electronic record keeping and a single-payer system. 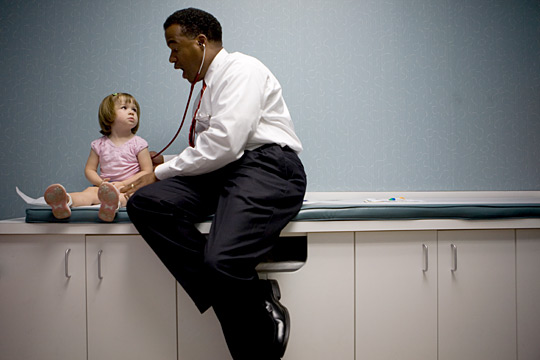 Dr. Wendell McKay examines 2-year-old Emma Churchill at his pediatric office in Howard County. He says his practice could be made more efficient through electronic record keeping.

Dr. Mark Applestein reviews a procedure with his patient, Deborah Brookman. He says he never gets denied by insurers when he orders a surgical procedure or X-ray, so he wonders why so much time has to be spent on the paperwork to get approval for the procedures. Katie Hayes/NPR hide caption 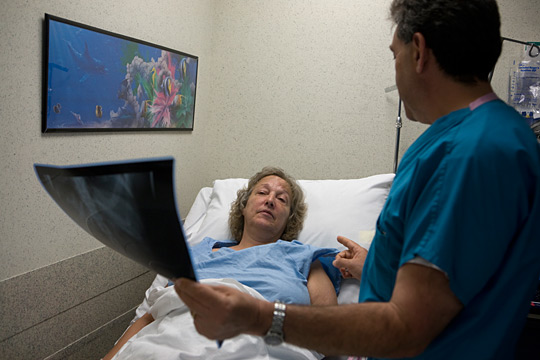 Dr. Mark Applestein reviews a procedure with his patient, Deborah Brookman. He says he never gets denied by insurers when he orders a surgical procedure or X-ray, so he wonders why so much time has to be spent on the paperwork to get approval for the procedures. 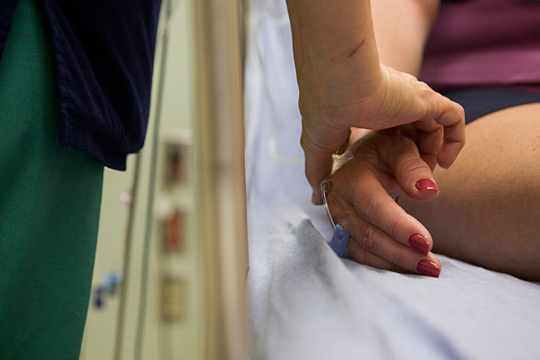 With health care overhaul back on Washington's agenda, NPR went to one locale to see how the big national issues play out there. In Howard County, Md., a prosperous suburb near Baltimore, we spoke with patients, doctors, administrators and employers about the costs of health care and access to the health care system.

One of the challenges facing health care providers in Howard County is the cost of care. And at Howard County General Hospital, owned by the Johns Hopkins hospital system, some of the biggest costs incurred are in the emergency room.

Vic Broccolino, the hospital's longtime chief executive, says 40 percent of emergency room patients in his hospital don't really need emergency care. But they often don't have anywhere else to go, he says.

"And Americans, with their obsession for instant gratification, have to go somewhere to receive care," Broccolino says. "They cannot wait until the next day to see a primary care physician, which would accommodate most of their needs, frankly, if they were willing to wait."

Broccolino believes that getting patients to rely more on primary care physicians than emergency rooms is key to cutting hospital costs.

President Obama has won commitments from hospital groups and insurers to cut the rate of increase of their costs by 1.5 percentage points a year over the next decade.

"I couldn't easily do that without trying to modify the behavior of some of the patients and some of the physicians, and working with them to modify that behavior through providing more primary care in the community," Broccolino says, "perhaps getting the government — local and state — to participate with us, and provide some services at that level."

But Broccolino says modifying the behavior of health care providers and patients can't be done at the hospital alone. The state of Maryland actually sets reimbursement rates for doctors, which is unusual. As a result, the doctors' fees are very low compared with other states.

"In my mind, [they] aren't rewarded adequately for their efforts and for what they can do to help the patients and the system," he says.

Maryland is in the bottom quartile in terms of physician reimbursements, even though the cost of living there is 20 percent above the national average.

Of course, one could eliminate that disparity by reducing doctors' reimbursements in high-reimbursement states. But Broccolino says he thinks the reimbursements for Maryland doctors should be increased.

On a recent day at the Howard County General Hospital, the pediatric emergency room was packed. In an ideal system, a lot of those kids would see a primary care provider like pediatrician Wendell McKay instead.

McKay is in a group practice. He and his partners have to balance the amount of time each patient requires with a sufficient quantity of patients. McKay's day begins early as he fills out forms for schools, colleges, summer camps and sports programs. Then come hours of patient visits.

How could the practice be more efficient? He says electronic record keeping would mean savings.

"I think it's senseless that we have someone who can go to a hospital and have to rely on phone call after phone call to get information from the primary care doctor," he says. "That information should be centralized ... using the technology that we have."

But the reason the records are not already electronic is it's expensive.

"We are on our way, but the biggest reason is because of cost," McKay says. "It costs us too much money — or it has in the past — to use the technology that's currently available in the marketplace."

In other words, to save money, they'll first have to spend money.

The Relationship Between Physicians And Insurers

Mark Applestein, a urologist who practices in Howard County, says there are efficiencies to be achieved, and costs that can be cut. But you would have to change the entire relationship between physicians and insurers to do it.

"There is an inordinate amount of waste — there is hours spent on paperwork, approval, hiring staff people, constantly verifying insurances, getting approval for procedures, whether it be surgical procedures, or if I order an X-ray," he says. "There are certain insurers that we have to call and get approval, and go through these various phone trees. And at times they deny them, so then I have to get on the phone and call the medical director. In 20 years, I've never been denied a surgical procedure or a test on a patient, but yet we continue to have to ask for permission, 'Mother may I,' and I just don't get it."

Because Applestein has never been denied, the question becomes, do doctors order too many tests? Applestein says yes, but there's a reason.

"The concern by physicians is if I don't order this test and I miss something, I will be sued," he says. "And that is a real problem. Physicians, for the most part, try to do their best. But physicians are people, and they make mistakes. If there is some egregious error, clearly someone should be compensated on some level. Personally, I do order tests sometimes for fear that if I don't get this and I miss something, then I have no defense. Get it."

Applestein finds the current system wasteful and frustrating. Bring on a single-payer system, he says.

That idea is far more radical than what's expected from Washington this year. What's especially challenging to lawmakers in these conversations is what no one has said: "I could provide the same service I do now for less money."