Accessibility links
'Playing Shakespeare' The Way The Pros Do It Playing Shakespeare, a 1984 series in which actors dissect some of the Bard's most famous works, shows how crucial an understanding of Shakespeare's language and versification are to conveying the meaning — and power — of his scenes.

Listen
'Playing Shakespeare' The Way The Pros Do It 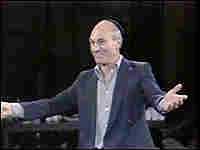 Before Star Trek, there was Shakespeare: Patrick Stewart as Shylock, the Jewish moneylender, in The Merchant of Venice. Acorn Media hide caption 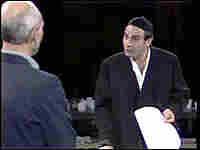 It's All In The Delivery: David Suchet performs a very different version of Shylock. Acorn Media hide caption 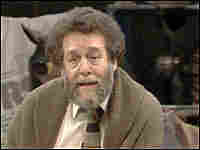 Nearly 25 years ago, I got a call from an old friend who was very excited about a British TV series called Playing Shakespeare that was airing in New York. It didn't make it to Boston, and probably not to most other places. But my friend recorded one of the episodes and sent me the tape.

I was blown away. The host was director John Barton, co-founder of the Royal Shakespeare Company, and the performers on that episode included Judi Dench. Nearly an hour was taken up with Barton going over a short scene line by line, showing how crucial an understanding of Shakespeare's language and versification were to conveying the meaning — and power — of the scene. How rare it was to hear an intelligent discussion of literature and drama on television.

Finally, a new label called Athena has just released a four-DVD set of all nine episodes of that 1984 series, and every one of them is a revelation.

Among the actors participating in Barton's exploration of Shakespeare are Ian McKellen, Patrick Stewart, Ben Kingsley, David Suchet (who's probably more famous in this country as Agatha Christie's Hercule Poirot than as a Shakespearean actor) and Dame Peggy Ashcroft in a rare television appearance.

In each episode, they perform or recite a variety of scenes or passages from a Shakespeare play or poem. These British actors have honeyed tongues and impeccable diction. But then Barton starts asking them to think about what Shakespeare actually wrote, down to his meter and line breaks.

Since the plays are written in verse, in a heightened language, should an actor make the performance more stylized or more naturalistic? What if one speech ends in the middle of a line of iambic pentameter and another character continues where that line left off? Does that indicate a pause, or a rush forward?

It's also fascinating to watch two actors approach the same character. There's a memorable sequence in which both Stewart and Suchet play Shylock. Suchet, who mentions that he is Jewish, feels that Shylock's Jewishness is central to the part. He plays the moneylender with a slightly Jewish inflection. Stewart, who isn't Jewish, feels the center of Shylock's character is his greed, and downplays his Jewishness.

Both actors resist the common temptation to sentimentalize Shylock — maybe because Barton had directed both of them in this part before. They couldn't be more different, yet both of them still convey the same hurt, anger and irony that are at the heart of this role.

My favorite episode remains the one my friend sent me. It's a brief scene from Twelfth Night, with Judi Dench as Viola, who is in love with the Duke Orsino, played by Richard Pasco, but who has to hide her love because she's disguised as a boy.

Barton stops the actors at almost every line, and after every interruption, the characters and their motivations take on another new dimension. When we finally watch the scene all the way through, we're no longer watching acting. The actors have become almost transparent; through them it's the characters, the story, the action, the play that compel us.

If you're interested in Shakespeare, in poetry or in theater, I think you'll be completely mesmerized by this series. And I'll leave the last wise, sensible words to John Barton:

"Shakespeare is his text, and the way he uses it is just that. So if you want to do him justice, you have to look for and follow the clues he offers. If an actor does that, then he'll find that Shakespeare himself starts to direct him."