Accessibility links
'Knocked Up' A rising-star TV reporter has a one-night stand with a guy who won't grow up; Judd Apatow's comedy is a kind of Peter-and-Wendy-get- preggers story for the 21st century. 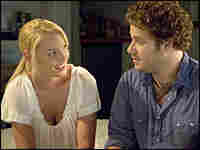 Katherine Heigl spends an evening with Seth Rogen in Knocked Up — and ends up, well ... Suzanne Hanover/Universal Studios hide caption 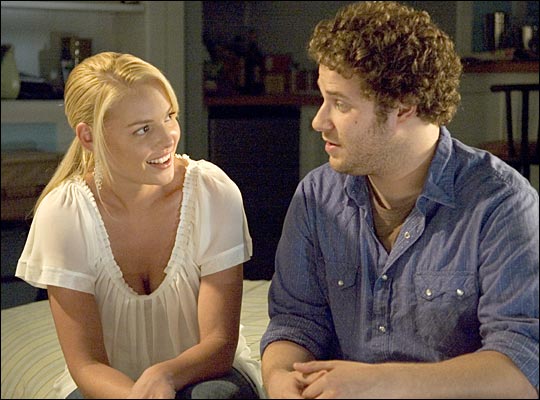 Katherine Heigl spends an evening with Seth Rogen in Knocked Up — and ends up, well ...

In the "seemingly raunchy but actually sweet relationship comedy" genre, writer-director Judd Apatow is king. And with the benefit of hindsight, his 40-Year-Old Virgin plays almost like a warm-up to this very funny Peter Pan-and-Wendy- get-preggers story.

Katherine Heigl plays a fast-rising TV entertainment reporter who has to rethink her priorities on the fly when she finds herself in the family way after a one-night stand with Seth Rogen's stoner dude. He's having way too much fun playing with his lost-boy buds to want to grow up anytime soon, but, well, this ain't adolescence anymore.

With that title, and surprisingly explicit sex for a mainstream romantic comedy, not to mention language blue enough to earn an R rating even without the sex, the film is clearly aimed at a young-adult crowd. But it's likely to appeal to older viewers, too — because its stars and its jokes are appealing, and also because it's emotionally true.