Accessibility links
During Tough Times, Canning Makes A Comeback At the University of Missouri's extension school, interest in food canning classes has skyrocketed as young and old alike look for ways to save money. 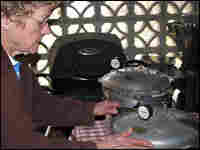 Pat Summer of Springfield, Mo., inspects her "canners," which are large pressure cookers. The 80-year-old teaches a class of younger women how to can food. Jennifer Moore for NPR hide caption 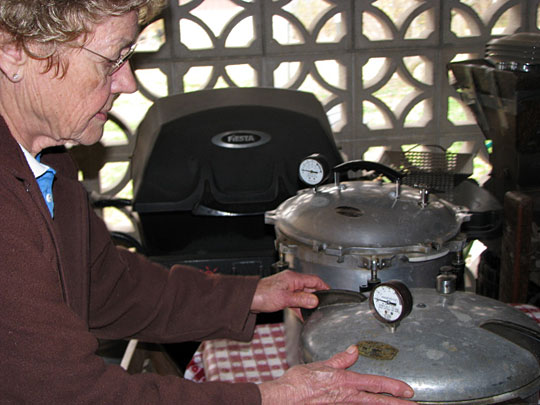 Pat Summer of Springfield, Mo., inspects her "canners," which are large pressure cookers. The 80-year-old teaches a class of younger women how to can food. 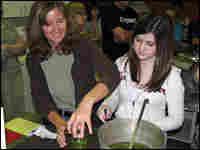 A mother and daughter at the canning class in Springfield, Mo., tighten the lid after spooning in the green beans. Jennifer Moore for NPR hide caption 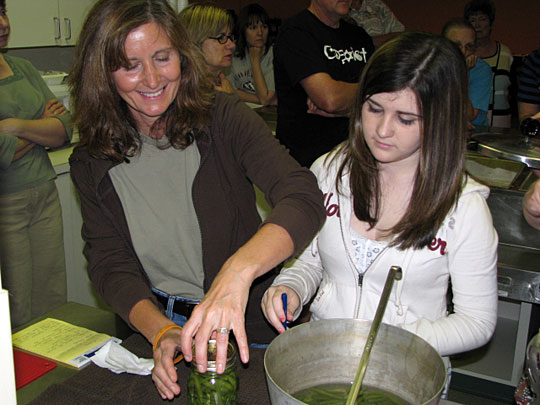 A mother and daughter at the canning class in Springfield, Mo., tighten the lid after spooning in the green beans.

When tough times hit, it's said that people "go back to what they know." Across the country, some people are trying to find out what their grandparents knew. Old and young alike are trying to pick up a new skill and save a little money by learning the art of canning food.

In the kitchen of the Second Baptist Church of Springfield, Mo., 30 people are snapping fresh green beans and tossing them into a pan.

This canning class is one of a dozen offered this summer through the University of Missouri extension office. Program director David Burton says the interest in canning food this year is unprecedented.

"Last year in Greene County, we really struggled to fill two canning classes," he says. "And this year, we thought we might face similar struggles. But our first class filled in just a matter of a couple of days. And really we found every time we would set up another two classes, we would book them about as quickly as we could set them up."

In the class, canning students place a huge pot of green beans on the stove. Nearby, eight glass jars are sterilizing inside a pressure cooker known as a "canner." Using a "jar lifter," the instructor removes each jar from the canner and dumps the steaming water out of it.

Class members then spoon the boiled green beans into the jars, tapping out bubbles before putting the seals and lids on. Then, the instructor places them in the pressure cooker, clamping it shut.

Shelley Vaugine is a master gardener with the UM extension office.

"Canning is really making a comeback. After about two decades, I'm finally trendy," she says, laughing.

Vaugine says just as the bad economy has led people to learn how to grow their own food, it has spurred interest in how to preserve it.

"In the Springfield area, we've lost hundreds of jobs here. And a lot of these people are not finding new jobs. They're just not out there. So they are going back to what they know," she explains.

But most only know of canning second- or thirdhand. Many of this generation never learned the skill their parents and grandparents relied on to get them through the rationing of the Great Depression and two World Wars. And as that older generation passed away, those canning skills went with them. Pat Summer knows about canning.

"During the Depression, I was canning at 11 years old," she says.

Now she's 80 years old, and she still cans the food she grows at home. During the 1930s, her father worked on President Roosevelt's Works Progress Administration, or WPA, as her mother went door-to-door selling hairbrushes. As a child, her little hands pulled hundreds of weeds from the family garden and canned lots of produce.

Summer was surprised when, earlier this year, she was approached by community leaders asking her to teach a group of younger women how to can food.

She says she gave up long ago trying to keep up with the latest technology — in fact, the only blackberries she knows go in jam.

"It's a good feeling. And it makes you not feel so much like you're rejected by the younger generation," she says.

The company Jarden Home Brands, which now owns the popular Ball line of canning products, says it has already seen a 30 percent increase in sales of jars and lids this year, and the bulk of the harvest season is still months away.