Accessibility links
Viral Culture: 'And Then There's This' News, gossip, scandal and video zip across the internet like wildfire, and then, faster than the speed of broadband, the stories die. Bill Wasik, author of And Then There's This, talks about the life cycle of viral stories.

News, gossip, scandal and video zip across the internet like wildfire, and then, faster than the speed of broadband, the stories die.

Bill Wasik, author of And Then There's This, talks about the life cycle of viral stories.

Tell us: Which accelerated bit of culture — a nanostory, a meme, a microcelebrity — captured your attention, then disappeared into the ether?

Excerpt: 'And Then There's This' 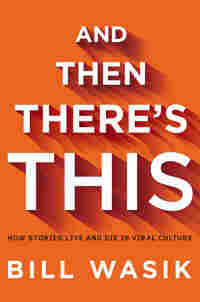 Courtesy of Viking, a member of Penguin Group (USA) Inc..

I begin with a plea to the future historians, those eminent and tenured minds of a generation as yet unconceived, who will sift through our benighted present, compiling its wreckage into wiki-books while lounging about in silvery bodysuits: to these learned men and women I ask only that in telling the story of this waning decade, the first of the twenty-first century, they will spare a thought for the fate of a girl named Blair Hornstine. Period photographs will record that Hornstine, as a high-school senior in the spring of 2003, was a small-framed girl with a full face, a sweep of dark, curly hair, and a broad, laconic smile. She was an outstanding student—the top of her high-school class in Moorestown, New Jersey, in fact, boasting a grade-point average of 4.689—and was slated to attend Harvard. But as her graduation neared, the district superintendent ruled that the second-place finisher, a boy whose almost-equal average (4.634) was lower due only to a technicality, should be allowed to share the valedictory honors.

At this point, the young Hornstine made a decision that even our future historians, no doubt more impervious than we to notions of the timeless or tragic, must rate almost as Sophoclean in the fatality of its folly. After learning of the superintendent's intention, Hornstine filed suit in U.S. federal court, demanding that she not only be named the sole valedictorian but also awarded punitive damages of $2.7 million. Incredibly, a U.S. district judge ruled in Hornstine's favor, giving her the top spot by fiat (though damages were later whittled down to only sixty grand). Meanwhile, however, a local paper for which she had written discovered that she was a serial plagiarist, having stolen sentences wholesale from such inadvisable marks as a think-tank report on arms control and a public address by President Bill Clinton. Harvard quickly rescinded its acceptance of Hornstine, who thereafter slunk away to a fate unknown.

I stoop to shovel up the remains of Blair Hornstine's reputation not to draw any moral from her misdeeds. Of the morals that might be drawn, roughly all were offered up at one point or another during the initial weeks after her lawsuit. She was just another member of a hyper-accomplished generation for whom getting good grades and doing good deeds has become a way of life," wrote the Los Angeles Times. The Philadelphia Daily News eschewed such sociology, instead citing more structural causes: "With college costs skyrocketing, scholarship dollars limited and competition fierce for admissions, the road to the Ivy League has become a bloody battleground." MSNBC's Joe Scarborough declared that "across the country, parents are suing when the ball doesn't bounce their child's way," while CNN's Jeffrey Toobin went somewhat more Freudian, branding her judge father as another example of "lawyers. . . inflicting it on [their] children." Nonprofessional Internet pundits, meanwhile, were every bit as incisive. "The girl's father is a judge," wrote one proto-Toobin on MetaFilter, a popular community blog. "Guess he's taught her too much about the legal system."

Echoed another commenter: "Behind every over-achieving student here are usually a pair of over-achieving parents who want their child o live up to their ridiculous expectations."

No, I offer up Blair Hornstine to history simply for the trajectory of her short-lived fame, the rapidity with which she was gobbled up into the mechanical maw of the national conversation, masticated thoroughly, and spat out: