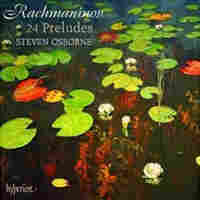 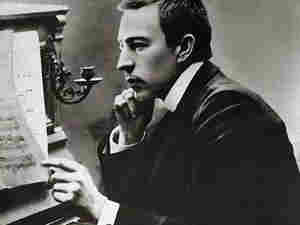 Sergei Rachmaninov in 1900. Although he was a 20th century composer, Rachmaninov chose to write in a late Romantic style. Courtesy of Wikimedia hide caption

Although Sergei Rachmaninov was one of the most successful 20th century composers, he has been snubbed by some musical elitists, even historians. One famous music history book devotes a mere seven lines to him. Rachmaninov never adopted a contemporary musical idiom, choosing instead to compose in a late-19th-century style, which helped make his music popular with audiences and musicians.

I've been listening to pianist Steven Osborne's wonderful new recording of Rachmaninov's 24 preludes. Many young piano students have played Rachmaninov's famous Prelude in C-sharp Minor and imagined themselves onstage at Carnegie Hall, hands in air, dropping down to play its grand octaves and chords. I was one of them.

Listening to this prelude, which opens the new CD, I couldn't stop myself from going to the piano and giving it another try — for about a page. Then, I just sat back and listened to Osborne play.

Rachmaninov composed 24 preludes, one for each musical key. They've been recorded by some of the greatest pianists, which makes it tough for any new recording to find a niche.

Preludes are essentially vignettes that explore one musical idea. So it's important to capture that idea in performance. Osborne does, and with great clarity, giving each prelude a distinct and compelling character.

A lot of music can be made ostentatious through overly opulent performance. But Osborne puts opulence on a diet. He looks inside the music for the basic threads that hold it together and comes up not with gauze, but with velvet.

Steven Osborne has reawakened in me the essential beauty of these preludes and reminded me also of the composer's high level of craft. Osborne brings a special feeling to the music. It's not opulence; it's innocence.