Accessibility links
Latest Nixon Biography Portrays an Isolated Leader The biography Richard M. Nixon, the latest installment in the American Presidents Series, portrays the 37th president as a paranoid leader who abused alcohol and drugs, had few friends and was obsessed with his image. Elizabeth Drew, the book's author, says she now believes Nixon to have been unfit.

The biography Richard M. Nixon, the latest installment in the American Presidents Series, portrays the 37th president as a paranoid leader who abused alcohol and drugs, had few friends and was obsessed with his image.

Elizabeth Drew, the book's author, tells Robert Siegel that when she began the project, she thought that Nixon was an improbable president; when she finished writing, she believed him unfit for the office. 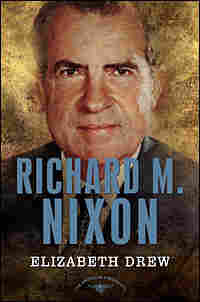 Richard Milhous Nixon was an improbable president. He didn't particularly like people. He lacked charm or humor or joy. Socially awkward and an introvert, he had few friends and was virtually incapable of small talk. He didn't care to, in his words, "press the flesh." He was also one of our most complex presidents: insecure, self-pitying, vindictive, suspicious — even literally paranoid — and filled with long-nursed anger and resentments, which burst forth from time to time. He never seemed the happy warrior.

Even reaching the pinnacle of American politics didn't satisfy him. The mixing of his psyche with the presidency made for a poisonous brew, with tragic consequences, as he became the first president to be driven from office. Strikingly, and openly, self-preoccupied, Nixon often talked or wrote about his inner feelings, sometimes with startling self-knowledge. Nixon's first book was titled Six Crises, about what he saw as his own ordeals. During his presidency he referred to it often, urging people to read it.

The historian David Greenberg has written that Nixon's unusual personality unleashed "an unprecedented national seminar on the hidden workings of the incumbent president's mind." Even Henry Kissinger, Nixon's national security adviser and later secretary of state, remarked, "Can you imagine what this man would have been if someone loved him?" Nixon was our most Shakespearean president; he brought us into his tragedy and made us go through it with him. He was the second president (but not the last) to face impeachment proceedings, though the proceedings against him were the most serious and least partisan. He was forced to resign his office before the full House of Representatives could vote on the articles of impeachment approved by the House Judiciary Committee, or the Senate could vote to convict him. By that time, he had no choice.

But Nixon was much more than the cartoon figure with the perpetual five o'clock shadow, his arms extended upward, his fingers forming a V. He accomplished a great deal more than is usually granted him — in large part because it's difficult not to view his presidency through the prism of Watergate and impeachment.

He has come to be widely considered our last progressive Republican president, picking up where William McKinley and Theodore Roosevelt left off. But his apparent progressiveness was so mixed with pragmatism and not a little cynicism, and so rooted in the politics of his time, and his interest in domestic policy was so limited, that there is reason to question whether he was a true believer in progressive policies and whether he would have held to them in a later, more conservative, Republican age. Even as he ran for the presidency in 1968, Nixon set in motion the turn of the Republican Party to the right. His foreign policy was marked by highs and lows.

For all his self-pity, Nixon was amazingly resilient to the end, not only surviving his defeats — which were of a magnitude that would have broken other figures — but coming back and back, creating his own restorations, repeatedly presenting the public with a "New Nixon." Yet while he convinced some pundits and others that there really was a "New Nixon," and he maintained a following until nearly the end, he also aroused unusually strong hatred among the American public — a hatred that has lingered long after his death.

How did such a peculiar man become president, and win reelection? In part it was that resilience, and also his fierce and dogged determination. Nixon displayed extraordinary grit; he was unusually willing to do the scut work of politics; he knew the country district by district, doing favors for myriad other politicians, expecting their support in return. Moreover, he was an exceptionally smart man, with a solid command of wide-ranging information, and an able politician. He was a product of his times as well as the pioneer of the rough political tactics for which he became famous — and loathed. Also, in light of what came later, it's important to recall that when Dwight D. Eisenhower selected him as his running mate in 1952, Nixon was a hero to a large swath of the American public, a star of the Republican Party. After that, he benefited from the Republican Party's traditional respect for hierarchy and its tendency to select tested warhorses. And, as in the case of many successful politicians, there was an element of luck in his triumph. Many observers believed that had Lyndon B. Johnson imposed a bombing pause in Vietnam a week earlier than he did at the end of October 1968, Vice President Hubert Humphrey, who was rapidly gaining on Nixon, might well have won that election. He also benefited by the selection in 1972, at a time when the social upheavals caused by the Vietnam War were at a peak, of George McGovern, the favorite of the antiwar left of the Democratic Party, at a raucous convention. McGovern went on to have a string of bad luck himself.

As a journalist in Washington I covered the Nixon presidency, and I wrote a book about the extraordinary period called Watergate. Nixon's tumultuous presidency was for those of us who lived through it the most riveting of our lifetimes and, perhaps, in all of American history. Those who went through that time with him are left with vivid memories: Nixon standing behind the podium at a press conference in the East Room of the White House as the Watergate scandal began to unfold, his hips swiveling as if within a hula hoop; Nixon telling the nation, "I am not a crook"; Nixon playing with a yo-yo on the stage of the Grand Ole Opry; Nixon's tearful farewell speech to his staff. And then the final overhead Vs as he boarded the helicopter to return to California. It has been said that Nixon's was a "criminal presidency," but that misses the larger point. He put the nation through an unprecedented constitutional crisis, during which for a long while it wasn't clear that our system of government would hold. It was a frightening time.

But his presidency was much more as well.