Accessibility links
Lack of Capacity Fuels Oil-Refinery Profits Gasoline prices are near an all-time high. Soaring prices for crude oil are partly to blame, but most of the extra money consumers are paying at the pump this year goes to refiners — which are profiting because of a lack of refining capacity in the U.S. 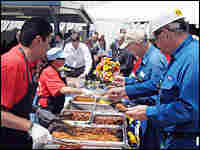 Tesoro hosted a barbecue for employees at its new oil refinery in Los Angeles, which the company just acquired from Shell. Refiners are living high on the hog this spring, after years of dining on scraps. Scott Horsley, NPR hide caption 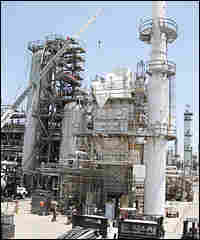 Tesoro plans to invest about $1 billion in the Los Angeles refinery over the next five years, which should boost gasoline production by about 20 percent. Scott Horsley, NPR hide caption 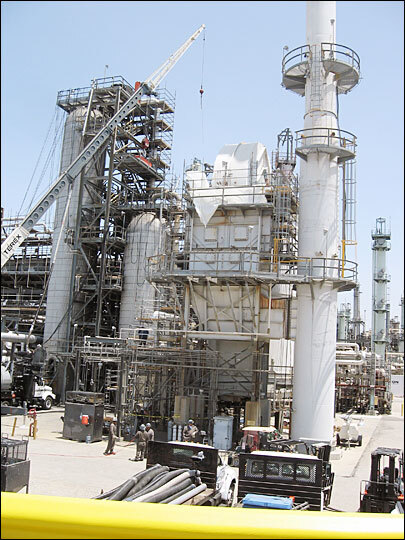 Tesoro plans to invest about $1 billion in the Los Angeles refinery over the next five years, which should boost gasoline production by about 20 percent.

What goes up must come down — at least a little bit — and that includes gasoline prices. A weekly survey by the Energy Department shows that gas prices fell by about a penny per gallon in the past week.

Prices are likely to remain relatively high this summer, though. Most of the extra money consumers are paying at the gas pump is going to refiners, who perform the crucial but often overlooked task of turning crude oil into useful products.

Just outside the gates of an oil refinery south of Los Angeles, workers recently feasted on a catered meal of barbecued pork, baked beans and corn on the cob. The host of the party was Bruce Smith, chief executive of the Texas-based Tesoro Corp., which just bought the oil refinery from Shell.

"We do this a lot at the refineries. And it's something that people really enjoy and appreciate. It's a nice celebration," Smith says.

For refiners, there is a lot to celebrate. In the first three months of 2007, refiners on the West Coast were able to charge about 70 cents per gallon more for finished gasoline than they paid for the crude oil used to make it; refinery margins in the specialized California market were even higher.

Those hefty margins helped boost Tesoro's profits during the first quarter to $116 million, a 170 percent increase from the same period a year ago.

An unusually large number of U.S. refineries were offline this spring. That allowed refineries that were operating to charge more for their gasoline. It also led to allegations from some consumer advocates that refiners were deliberately withholding gas in order to drive up prices.

Tesoro denies there is anything nefarious behind the shutdowns. Lynn Westfall, the company's chief economist, says refiners were preoccupied last year with new environmental fuel formulations, so some routine maintenance projects were postponed until this spring.

"When you do that and run a refinery a year longer than it should have been running, and you shut it down, you find a lot of things you weren't expecting and it's harder to bring it back up," Westfall says.

This past week, the Energy Department reported that more than 90 percent of the nation's refinery capacity is now in service. As more gasoline is produced, Westfall expects prices to drop, but not by much. He says the United States is still just one big refinery shutdown away from another spike in prices. And he doesn't expect that to change any time soon.

"If you were to ask us to go build a brand new refinery anywhere in the world, I would tell you you'd be lucky to have it up and running in six or seven years," Westfall says. "And then you'd need 10 to 15 years of today's margins to pay it back. So building a new refinery is a 20-year bet that margins are going to remain very high."

Few companies are willing to make that bet, especially at a time when the federal government is trying to curb demand for gasoline by substituting alternative fuels.

Instead, Tesoro and other refiners are making smaller wagers, increasing capacity and reliability at their existing refineries. Tesoro plans to spend about $1 billion at the Los Angeles plant over the next five years. That should boost output by about 20 percent. That is helpful, but not enough to make a big dent in prices.

"In the next five years, we think the world is going to be fairly short of refining capacity. And that's going to keep margins at a higher than normal level," Smith, Tesoro's CEO, says.

Demand for gasoline nationwide is still growing, but there are some signs of a slowdown. In high-priced California, tax records show gasoline consumption actually dropped in February by about 2.5 percent.