Accessibility links
Adler And Doonan: Like Father, Like Son ... Sort Of Designers Jonathan Adler and Simon Doonan appreciate their fathers' influence on their artistic endeavors. Both dads were role models for their creative sons in very different ways. 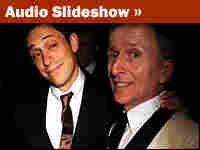 As Father's Day approaches, designers Jonathan Adler and Simon Doonan are celebrating the roles their fathers played in their creative lives.

Both fathers were straight, their sons gay. Now their fathers are deceased, which makes Father's Day "an odd time," Adler notes.

Adler and Doonan have been married to each other for 14 years. Adler recalls the day his 28-year-old self took his much older boyfriend, Doonan, home to meet his father.

"I don't think that every father dreams that his son will bring home a 42-year-old window dresser, but he kind of rolled with it," Adler says, referring to Doonan's work for high-end department store Barneys New York. "My parents were not ecstatic about my being gay, but I think they loved [Doonan] regardless of [his] stats as a window dresser, which wasn't the sort of the Jewish intellectuals' dream for their son."

Morning Edition's occasional series turns the mic over to some very talented radio amateurs — writers, musicians, artists — to put together an NPR story.

Doonan grew up in Reading, England; Adler in small-town New Jersey. Both agree that neither of their dads was a traditional "dude" who played golf with other "dudes," and they had eccentricities of their own. But neither one had a day job that was particularly creative.

Doonan's father, in particular, had many challenges, from poverty to mental illness in his family. But Doonan thinks that "given other circumstances, he could have developed a real creative side to him." For instance, "he would make furniture out of orange crates, and he loved opera."

A version of Doonan's father is familiar to many in the U.K. who watch Beautiful People, a TV show based on Doonan's memoir about growing up in an unusual family, Beautiful People: My Family and Other Glamorous Varmints.

But living in a house of "crazy relatives we were like a circus act in our street, which fueled my creativity."

Doonan's father, Terry, was never forthcoming about taking pride in his son's creativity, which Doonan found difficult. But Adler says he thinks that's a good thing, because otherwise Doonan "would have been unbearable."

Adler's dad was a lawyer but spent nearly all of his free time working on art. The two men shared a passion for art, but Adler's idea about the role art played in his father's life has changed over time.

"Growing up I used to think, 'God, he's such an idiot. He should have made a career as an artist.' And I thought that that was a cop-out and possibly even a failure," Adler says.

"Now as an adult I see it the exact opposite way. His approach to being an artiste was so much purer and more brilliant than it would have been if he had made art a career," Adler says, adding that his dad serves as an inspiration for him today.

"Whenever I'm slogging away in the middle of some corporate meeting, I always try to remember my dad and think about his pure passion for art and creativity, and try to channel that into my own work."