Accessibility links
Bomb-Sniffing Dogs Deploy In Afghanistan Roadside bombs are the greatest threat facing troops in Afghanistan. Metal detectors can find many of these bombs. But increasingly, insurgents are using homemade explosives that contain little metal. Now, U.S. Marines are training bomb-sniffing dogs to detect this type of explosive. 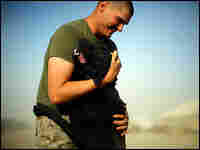 Lance Cpl. Steven Snider shares a hug with Lode, one of the Marines' working dogs trained to detect and locate improvised explosive devices. The Marines and their dogs will finish training at Camp Leatherneck, Afghanistan, before heading into Helmand province, a Taliban stronghold. David Gilkey/NPR hide caption 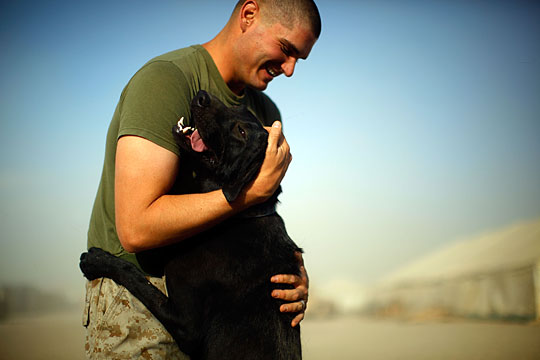 Lance Cpl. Steven Snider shares a hug with Lode, one of the Marines' working dogs trained to detect and locate improvised explosive devices. The Marines and their dogs will finish training at Camp Leatherneck, Afghanistan, before heading into Helmand province, a Taliban stronghold. 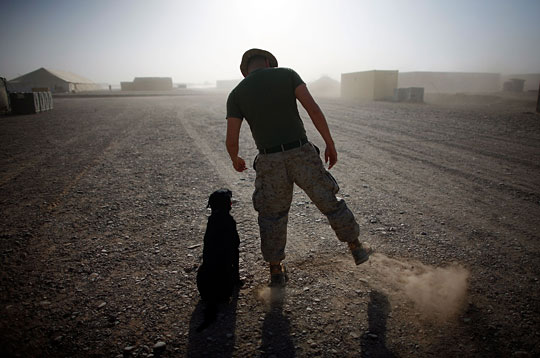 Jenni, a black lab trained to detect bombs, heels next to Snider.

Roadside bombs pose the greatest threat to U.S. troops in Afghanistan. The Marines are employing a new tool, a four-legged variety, to detect the deadly devices.

Increasingly, insurgents are using massive homemade explosives — which can be as simple as buried plastic jugs packed with a deadly mix of fertilizer and fuel, and contain little metal. The keen nose of a trained dog can find the bombs that a metal detector cannot.

At Camp Leatherneck in Helmand province, the Taliban stronghold in Afghanistan's south, bomb-sniffing dogs and their handlers are doing last-minute drills, like the rest of the Marines at the base.

But this training starts out like any ordinary trip to walk the dog.

"We usually air them out before we start to work them, so they don't go to the bathroom while we're running them and stuff," Leddy says.

"When he's all done, he usually comes up to me and tells me he's ready," he adds.

Lode and Leddy are one of 13 bomb-detecting teams attached to the Marines' 2nd Battalion, 8th Regiment, whose home base is Camp Lejeune, N.C. Their task is to help clear the roads of the deadly bombs that are taking a major toll on U.S. troops.

In one training exercise involving foot-long rubber batons called bumpers, Lode plays an impressive game of fetch. He follows whistles and arm signals like a border collie, going to the bumper Leddy directs him to, while ignoring the others.

The drill trains the dog to be able to approach a suspicious pile of gravel or a box near the road that could contain a bomb.

Working a black Lab in the dust and heat of the desert may seem cruel. Labs are water dogs, and hot sun on black fur can't be much fun. But the Marines say Labs are focused and need to drink less often than many breeds.

But to Leddy, Lode is more than an asset — he's a companion.

"[Lode] can sense when an explosion goes off. ... If I jump, usually he's right next to me or he'll come near me," Leddy says. "He's my best friend right now."

But that bond — essential to a good team — also can be a problem, says the top enlisted man in the battalion, Sgt. Maj. Robert Breeden.

"It's tough because one of our biggest obstacles is having a Marine not become so attached to [them], because [the dog] is not his," Breeden says.

And like any tool in the arsenal, the dogs are meant to be used.

When the Marines are on the battlefield, they — canines included — have a job to do, Breeden says.

"We've got a suspected IED, the dogs are deployed. You have to send that dog in danger's way, but that dog is protecting everyone else," he says.

After running Lode through the drill, his handler, Leddy, pets the black Lab and gets a big wet dog kiss in return.

"I owned a few dogs, but nothing like this. I mean, these dogs are amazing," Leddy says.

Lode is 2 years old and, like many of the young men of the 2/8, is on his first deployment.

"It's going to be sad when I let him go at the end of seven months. We have to give them back, unfortunately. I'd like to keep him, but you know, he has got to work, just like me. He's got a contract he's got to fill," Leddy says.

The young Marine and his dog are ready to head out onto the booby-trapped roads of Helmand province, searching for bombs and protecting the rest of their battalion.