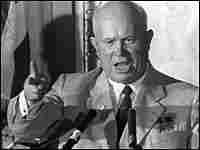 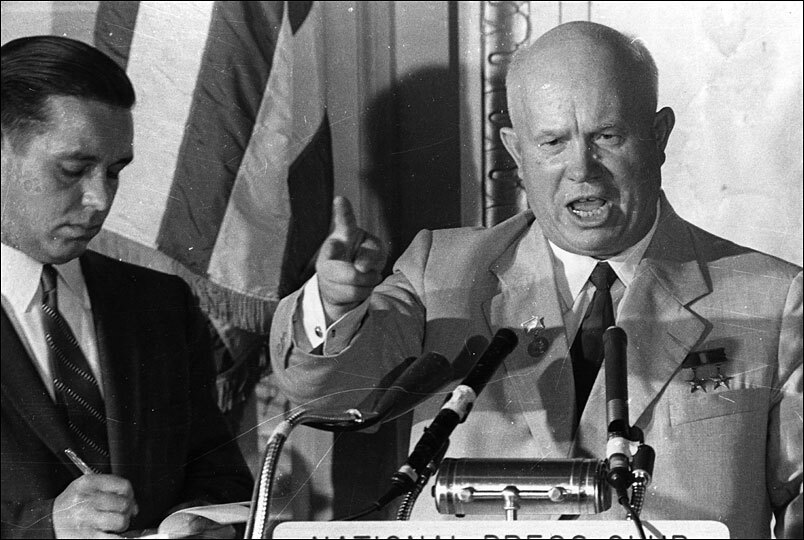 Soviet leader Nikita Khrushchev addresses the National Press Club in Washington, D.C., before setting off across America in September 1959. 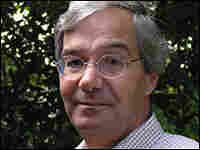 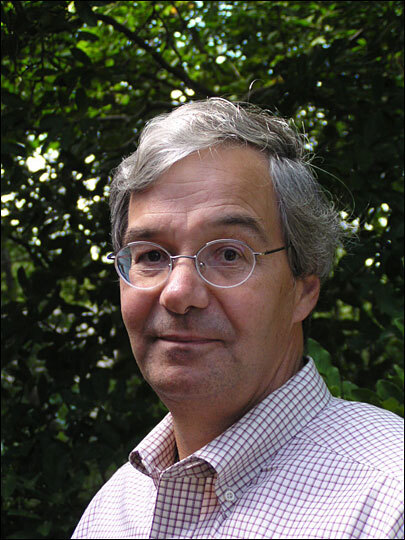 Nikita Khrushchev may well have been the first reality television star. In 1959, the pugnacious general secretary of the Communist Party of the Soviet Union undertook a tour across America, during which he alternately greeted crowds, kissed babies and criticized the local way of life — all to the delight of the press corps following his every move.

In his new book, K Blows Top, former Washington Post reporter Peter Carlson digs up old newspaper clippings about the trip and revives the melodrama and humor of the Soviet leader's 10-day tour.

The title of Carlson's book is a reference to an actual headline that ran in the New York Daily News after Khrushchev was prevented from visiting a popular American tourist attraction: "Denied Tour of Disneyland, K Blows Top."

"They called him K because Khrushchev is a very long name, and they couldn't fit it in headlines," Carlson tells Alison Stewart.

The headlines that Carlson includes in the book are all real, including "Khrushchev to Get Free Dry Cleaning" (printed before the communist honcho's arrival) and, above a story about a man who killed two people after watching the leader's arrival on television, "Sees K on TV so He Murders Two."

Carlson explains that Khrushchev's fateful visit was the result of a diplomatic snafu that occurred while the Soviets and Americans were negotiating in Geneva about West Berlin. Hoping to hammer out a compromise, President Eisenhower invited the general secretary to visit the U.S. — on the condition that the two countries come to an agreement about Berlin.

But that condition was accidentally left out of the invite: "Khrushchev got the letter and immediately said, 'Sure, I'll come over. How about letting me travel around the country for a few weeks?' " Carlson says. "There wasn't much Ike could do. He couldn't un-invite him."

The American public was divided over the visit, but thousands wrote to invite Khrushchev to their homes and lodge meetings and factories.

"Finally, basically, they let Khrushchev go where he wanted to go, which was Washington, New York, Hollywood, San Francisco and a steel mill in Pittsburgh," Carlson says.

Though Khrushchev remarked several times throughout the tour that things were better in the Soviet Union, he did praise American hot dogs and the lockers at Washington, D.C.'s Union Station.

The trip wound up at the Camp David presidential retreat, where Khrushchev engaged in summit talks with Eisenhower — who left a lasting impression on the Soviet leader.

"He flew home and immediately visited a huge rally in Moscow where he praised Eisenhower's wisdom and his love of peace," Carlson says.

Khrushchev retained a fondness for Eisenhower, and even built a golf course in anticipation of the American president's visit the following year. But then, on May 1, 1960, Eisenhower sent a U-2 plane on a Soviet Union spying mission. And Carlson says Khrushchev reacted by throwing "a major temper tantrum."

"He appointed himself head of the Soviet's delegation to the U.N. and ... did everything he could to embarrass Eisenhower and denounce the United States" on his next visit to the country, Carlson says. 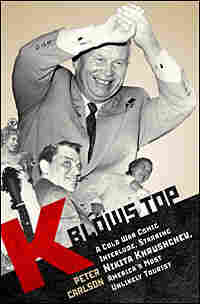 In the mid-1980s, I was a re-write man at People, a job that compelled me to type furiously on Mondays, Tuesdays and Wednesdays, but required almost no work on Thursdays and Fridays. To fill the idle hours, I amused myself by exploring the treasures of the Time-Life library of newspaper clippings. I'd remember some famous person who'd lived since the founding of Time magazine in 1923, then call the library and request the clippings on him. A few minutes later, a messenger would drop a folder on my desk. I perused the clips on such great American characters as John Dillinger, Emma Goldman and Father Divine. It was fun.

One day, after reading somewhere that Soviet Premier Nikita Khrushchev had been barred from Disneyland during his tour of America in 1959, I called the library and requested the clips on his trip. A few minutes later, a librarian called back. "There are an awful lot of them," she said. "Are you sure you want them all?"

I replied with the phrase that's launched a million misadventures: "Sure, why not?"

Soon, a messenger appeared, pushing a cart packed with bulging folders. Lined up against my office wall, they covered more than ten feet of floor. I turned the first one upside down on my desk and quickly found myself falling through a rabbit hole into a weird wonderland. At first, I just glanced at the headlines:

"Khrushchev Is A Showman on His Arrival"

And this one, which, for some reason, still makes me laugh:

"Khrushchev To Get Free Dry Cleaning"

Actually, most of the headlines did not contain the word "Khrushchev." His name was frequently too long to fit, so the unsung poets who create America's headlines had to conjure up shorter monikers. They nicknamed the visitor Khrush ("Khrush Irked In Hollywood") or Khrushy ("Be Warned! Khrushy Is a Clever TV Performer") or Niki ("Question Sizzles Niki"). Frequently, the headline writers referred to the Chairman of the Council of Ministers of the Union of Soviet Socialist Republics simply as "K," as if he were a character out of Kafka:

And the classic New York Daily News headline that inspired the title of this book:

Illustrating the adventures of K in America were photos of the pudgy traveler, who mugged shamelessly for the cameras like a mischievous eight year old. Khrushchev may have been a dictator responsible for thousands of deaths, but he was also an incurable ham who couldn't bear to disappoint a photographer. Consequently, the pictures in the clip folders were wonderfully wacky: Khrushchev grabs a live turkey! Khrushchev pats a fat guy's belly! Khrushchev gawks at chorus girls! Khrushchev pretends to shoplift a napkin holder by stuffing it into his suit jacket while laughing uproariously!

Khrushchev's trip was, as Cold War historian John Lewis Gaddis dubbed it, "a surreal extravaganza." Within an hour of reading the first clipping, I was hooked. For months, I spent my Thursdays and Fridays following the adventures of K as he traveled from Washington to New York to Hollywood to San Francisco to Iowa to Pittsburgh to Camp David, creating hilarious havoc all the way.

The trip was a picaresque journey across America, like Huckleberry Finn, On The Road, or National Lampoon's Vacation: The world's leading communist traipsed through capitalist America at the height of the Fifties — a land of movie stars, rock & roll, tailfins, suburbs, segregation, missile silos, fallout shelters and duck & cover drills. He was a not-so-innocent abroad in a landscape populated by posturing pols, hustling PR men, angry protesters, gatecrashers, anti-Communist skywriters and mobs of frenetic reporters — plus Frank Sinatra, Shirley MacLaine, J. Edgar Hoover, Perle Mesta, Richard Nixon, JFK, LBJ, and a crotchety Iowa corn farmer named Roswell Garst, who might have been the only man on Earth who could steal a scene from Nikita Khrushchev.

The trip was hilarious but the humor was darkened by the shadow of the atomic bomb, which rendered the Cold War the first era in history when rational humans feared apocalypse that could end civilization. As Khrushchev kept reminding people — by his comic tantrums and his grisly jokes — he was a hot-tempered man who possessed the power to incinerate America... 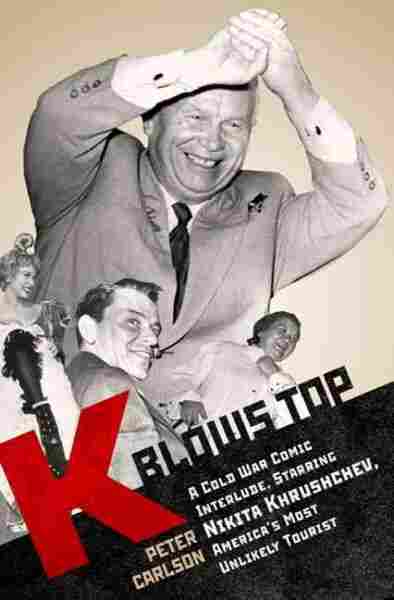