Accessibility links
You Must Hear This: Prince's 'Purple Rain' We asked Adam Levine and Jesse Carmichael of the band Maroon 5 to share a piece of music that they love, that inspires them and that they listen to again and again. Hear why they chose Prince's Purple Rain.

You Must Hear This 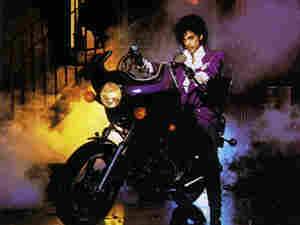 Prince on the cover of Purple Rain. hide caption

Today, we're launching a brand-new music series to kick off summer, called You Must Hear This. We've invited musicians from all genres -- rock, country, jazz, hip-hop, classical, bluegrass -- to share a piece of music that they love, that inspires them, that they listen to again and again. And we've asked them to tell us why.

Jesse Carmichael and Adam Levine are founding members of the group Maroon 5. One thing they share is their love of Prince's Purple Rain.

Carmichael: It's interesting when you discover somebody that was around before your time. I really got into the album Purple Rain after I saw the movie, and it was one of those times when I thought, "How could nobody have told me about this earlier?"

The album starts with "Let's Go Crazy," and when you hear the sound of the organ and his gospel sermon begins, you really get sucked into a whole new world. I think he sums up everything I think about life at the end of that monologue when he says, "In this life you're [on your] own, and if the elevator tries to bring you down, go crazy."

Levine: The album Purple Rain is as enigmatic as Prince himself. It's so difficult to break down or articulate why it's so special. It's Hendrix, it's James Brown, it's outer space, it's church, it's sex, it's heavy metal. But at the end of the day, it's just Prince at his absolute best -- in my not-so-humble opinion.

Carmichael: The reason Prince is an inspiration to me is that he's obviously writing from the heart, and somehow he's able to take these personal feelings, turn them into poetry and present them in a way that's accessible and weird at the same time.

Levine: What makes it so special is that no one had ever really heard anything quite like it. It's such a fearless record. The music is just completely limitless and unselfconscious about what it is. And that's why I truly, genuinely love it.

Carmichael: Basically, I think of Prince like a god in another realm. It's easier for me to think of him as a character in a movie than a real person. I mean, of all the people who might be aliens or angels or something like that -- if we found out that he was not of this Earth, I wouldn't be that surprised.

Levine: And what really puts it over the top is how the music is performed in the film Purple Rain. It's as exciting and eclectic as the music itself. People never would have fully understood what it was unless you could see it unfold in front of you visually. It's truly brilliant, and you must hear it.

You Must Hear This is edited and produced by Ellen Silva and Frannie Kelley. Brendan Banaszak produced the mix for All Things Considered.