Accessibility links
Korean-American Police Officer Sidesteps Tradition Julie Sohn's parents emigrated from Korea in the early 1970s. They dreamed their only daughter would benefit from all their adopted country could offer. They never imagined she would become a cop. 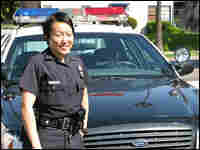 Officer Julie Sohn works in the Los Angeles Police Department's Use of Force Review Division. Before joining the LAPD, she did a tour in Iraq with the Marines. Gloria Hillard/NPR hide caption 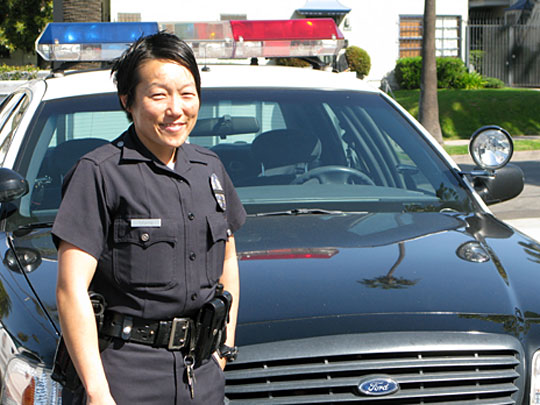 Officer Julie Sohn works in the Los Angeles Police Department's Use of Force Review Division. Before joining the LAPD, she did a tour in Iraq with the Marines. 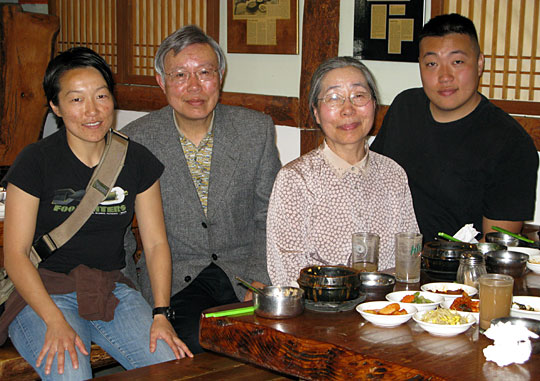 At first, Sohn's father, Soon Ho, (second from left) resisted the idea of his only daughter becoming a police officer.

When Julie Sohn's parents arrived from Korea in the early 1970s, they dreamed that their only daughter would benefit from all their adopted country could offer.

The 31-year-old has exceeded all of her parents' expectations, in a very untraditional way.

Sohn is an officer with the Los Angeles Police Department. She drives a black and white patrol car down boulevards lined with hundreds of Korean-language signs, shops and bakeries. Koreatown, for her, is both a foreign and a familiar place.

"I'm definitely more Americanized than a lot of people in Koreatown," she says.

One of the restaurants in this neighborhood is owned by Sohn's cousin. On the tables are multicolored appetizers and small clay pots full of red-hot bubbling stew. Sohn says when her parents first arrived, they had trouble finding authentic Korean ingredients.

"My parents came here in the ... early '70s and, you know, they like to tell me stories about how when they first came to the United States, they had to make do with sauerkraut and hot sauce to make kimchi," she says.

Today, her father, a pharmacist, and her mother, a doctor, want to share stories about their only daughter. Soon Ho Sohn, 72, recalls the day his daughter told him she was joining the Marines. At first he said "no."

"But my wife said, 'Leave her alone for what she wanted. That's the American way,'" he says, chuckling.

After completing her service, including a tour in Iraq, the former Marine captain put on another uniform when she joined the Los Angeles Police Department. She says her father was resistant to the idea at first.

"I think part of it is I'm his only daughter. And then, just traditionally speaking, he just wants me to get married, you know?" she says, laughing.

Sohn was recently assigned to LAPD's Use of Force Review Division, which handles cases of officer-involved shootings. Like most police officers, she sharpened her chops on patrol.

"When a radio call comes out, it gives you maybe 25 percent of what is really happening and you have so much more to find out when you get on the scene. You're trying to piece together a story," she explains.

In piecing this story together, we need to go back to the early 1980s where Sohn grew up in the predominantly white suburbs of Orange County.

"The racism that we dealt with was very formative — I guess is the best way to put it," she says. "So for the longest time it was me trying to understand why people were treating me this way, because for me, all I knew was America. I was born and raised here."

Growing up, Sohn's parents insisted she and her three brothers learn and speak only English. Sohn can understand Korean but is not fluent in it. She talks about the time she responded to what she says is one of the hardest calls a cop can make — it was a suicide and the family was Korean.

"We walk in there, my partner and I together, and we meet with the family," she says. "And I found myself, you know, stumped because I never learned the language of grief in Korean."

So she called her father on her cell phone. On that day, she says her dad was definitely the back up.

Sohn says for her, becoming a cop "was just giving back to a country that has given my family so much opportunity we wouldn't have back in Korea."

And, there was another reason she joined the force; it's the one most cops will tell you: "You wanna get those bad guys," she says. "And the other part is just to make sure people are safe."

In the last three years on the job, Sohn says her father seems to have come around. He says he's proud she joined the LAPD.

Of course, she's still his only daughter.

"I hope she will find a boyfriend to get married. That's all I need right now," he says, laughing.