Accessibility links
Insurers Revoke Policies To Avoid Paying High Costs Rescission, the act of retroactively canceling health insurance, is fairly common, a new congressional report finds. Companies can cancel policies right before a patient is scheduled to have major surgery if the patient failed to tell the company — either deliberately or inadvertently — of a pre-existing condition. 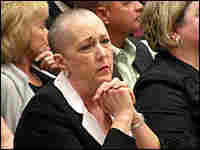 Just a few days before her scheduled mastectomy, Robin Beaton's insurance company retroactively canceled her policy because she had failed to inform them of her history of acne and a rapid heartbeat. Courtesy Rep. Joe Barton hide caption 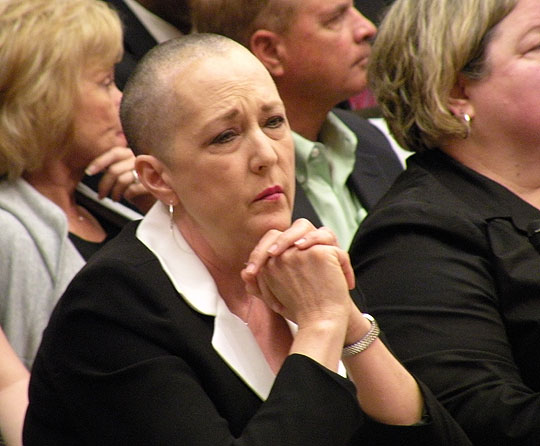 Just a few days before her scheduled mastectomy, Robin Beaton's insurance company retroactively canceled her policy because she had failed to inform them of her history of acne and a rapid heartbeat. 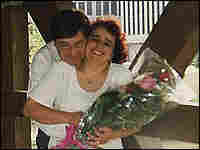 When Otto Raddatz, shown here with his wife, was diagnosed with lymphoma, his health insurer rescinded his policy because of a pre-existing condition he was not aware of. His sister Peggy Raddatz testified on his behalf to a congressional committee. Courtesy Peggy Raddatz hide caption

According to a new report by congressional investigators, an insurance company practice of retroactively canceling health insurance is fairly common, and it saves insurers a lot of money.

A subcommittee of the House Energy and Commerce Committee recently held a hearing about the report's findings in an effort to bring a halt to this practice. But at the hearing, insurance executives told lawmakers they have no plans to stop rescinding policies.

The act of retroactively canceling insurance is called rescission. It happens with individual health insurance policies, where people apply for insurance on their own, not through their employers. Their application generally includes a questionnaire about their health.

The process begins after a policyholder has been diagnosed with an expensive condition such as cancer. The insurer then reviews the health status information in the questionnaire, and if anything is missing, the policy may be rescinded.

The rescissions based on omissions or immaterial conditions incensed many lawmakers.

"I think it's shocking, it's inexcusable. It's a system that we have in place and we've got to stop," Energy and Commerce Committee Chairman Henry Waxman (D-CA) said at the hearing.

From the other side of the aisle, Rep. Joe Barton (R-TX) was also appalled.

"Doesn't it bother you to do this?" he asked Don Hamm, CEO of Assurant Health, who appeared with the CEOs of UnitedHealth's Golden Rule Insurance Co. and WellPoint's Consumer Business.

Losing Insurance At A Critical Time

Hamm's insurance company rescinded the policy of Otto Raddatz after he was diagnosed with lymphoma. Raddatz had not told the company about a CT scan by a now-retired doctor that showed gallstones and a weakened blood vessel.

That's because he didn't know about the findings, his sister Peggy Raddatz, an attorney, testified. She spent weeks on the phone and ended up at the Illinois Attorney General's office, which began an investigation. The retired doctor turned out to be off on a fishing trip.

"Luckily, they were able to find the doctor, who was able to say, 'Yes, I never discussed those issues with him; they were very minor,' " Raddatz testifed.

One of Barton's constituents, Robin Beaton of Waxahachie, Texas, did know that her health history included acne and a rapid heartbeat. But she didn't think they were relevant to her current health and left them off her application.

After she was diagnosed with breast cancer and was scheduled for a double mastectomy, her insurer cancelled her policy, leaving her devastated.

"I had to completely refocus on what to do, where to turn, because my insurance canceled me," she said. Beaton called Barton's office, which started a series of phone calls to her insurer. It took a call from Barton himself to get her reinstated.

Committee investigators found a total of 19,776 rescissions from three large insurers over five years. The rescissions saved the insurers $300 million.

During the hearing, Barton asked Hamm how he felt hearing the three cases of people who'd been burned by rescission.

"I have to say I felt really bad," Hamm replied.

"It's my hope there will be changes made that this will no longer be necessary," he said. His hope, and that of the other insurance company CEOs who testified, is that a health care overhaul will mean that everyone has insurance. If that were the case, people couldn't wait until they got sick to apply, and insurers wouldn't have to worry about whether someone had lied on an application.

Several lawmakers at the hearing suggested there were things the companies could do right now: They could vet applications when they receive them, rather than waiting until people get sick; they could consider whether something that was omitted was related to a current health condition before rescinding; and they could be more careful to positively identify fraud before rescinding a policy.

Rep. Bart Stupak (D-MI), who chaired the hearing, asked all three CEOs if they would agree to stop rescinding policies except in cases of fraud.

All three said no.

If they don't do something to stop it, said Barton of Texas, Congress will.