Accessibility links
Bat For Lashes: Pop Songs Bred Of The Visual And Unusual U.K. musician Natasha Khan, better known as Bat For Lashes, uses a fusion of keyboards and harps to generate tribal beats and electronica. She speaks on the uncommon sounds and ideas behind her acclaimed new album, Two Suns. 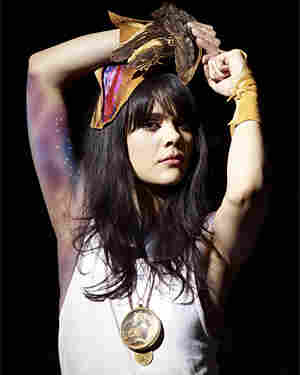 While in college, English musician Natasha Khan studied both music and a variety of visual arts: photography, illustration, film. So when it came time to pick a professional pseudonym in order to separate her creative endeavors from her personal life, she chose something full of odd visual imagery: Bat For Lashes.

Bat For Lashes' music is a fusion of pianos and harps playing tribal beats and electronica. Khan plays many of the instruments herself, using synthesizers to generate uncommon textures.

In 2007, her debut album Fur and Gold earned glowing reviews from both sides of the Atlantic Ocean. Earlier this year, she released Bat For Lashes' follow-up, Two Suns, to even greater acclaim.

Khan, whose father is from Pakistan and whose mother is British, took a break from her U.S. tour to speak with guest host Alison Stewart. Khan says she grew up mostly outside London but visited her relatives in Pakistan in the summers.

"I experienced quite unusual events out there," she says. "Like sacrifices of animals, and strange, crazy markets with little birds that were all dip-dyed in different neon colors. And at nighttime, I'd go to sleep and hear prayers being sung from the mosques."

However, she calls England her main cultural influence.

"I think growing up with Roald Dahl and fairy tales and butterflies and all of those kind of English archetypal things I think, perhaps, have influenced my work more," Khan says.

To hear the full interview with Bat For Lashes, click the link at the top of the page starting around 12 p.m. ET on June 21.