Accessibility links
Pakistani District Uneasy After Military Victory The Pakistani army says it is wrapping up a major two-month offensive against the Taliban in the Swat Valley and adjoining districts. It says most of the militants have been eliminated from the area. But in the embattled district of Buner, a sense of insecurity still prevails. 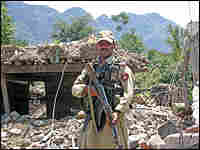 The army claims to have secured Buner. The challenge now is to hold it. Julie McCarthy/NPR hide caption 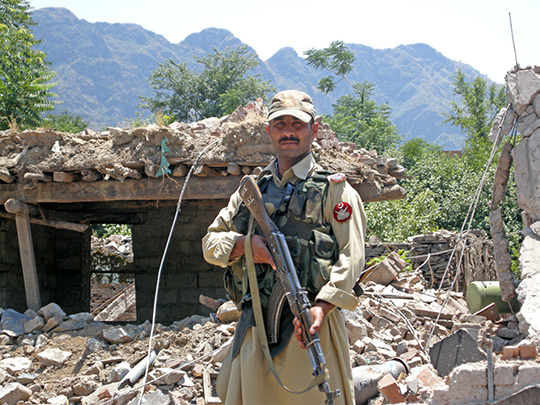 The army claims to have secured Buner. The challenge now is to hold it.

Pakistan's army has been waging a major offensive against the Taliban in the Swat Valley and neighboring districts. Authorities claim that most of the militants have been eliminated from the area, but a sense of insecurity is still palpable in the embattled district of Buner.

The quiet of Buner is striking, especially on a Friday. There's no muezzin calling the faithful to prayer. Mosques, usually overflowing, are empty. Some of the whitewashed places of worship bear the bullet holes of the two-month campaign. The fighting to oust Taliban militants from this district of panoramic vistas and bucolic valleys sent the population fleeing for their lives.

With the conflict easing, residents have begun to trickle back, maneuvering mountain roads littered with the scorched carcasses of vehicles destroyed in the battle.

The army, escorting a convoy of officials and journalists, passes a teenager on the road hoisting a white flag. White flags are flown from the houses of Buner, not a signal of surrender but a sign to convey that no combatants are there. Fears of the Taliban returning, and the army resuming its shelling, grip the population. But the fear is baseless, according to Col. Naseer Janjua, commander of the Frontier Corps. From his headquarters perched in Buner's main town of Daggar, he says government forces are in control.

"And the operation is almost over. Now we are in a support role of the civil administration, so that their machinery can function and that they can take control of all the things. Normalcy in this area is going to return very, very soon." Janjua says the only thing preventing residents from coming home is a lack of electricity.

But the heavily armed security personnel escorting officials and journalists thru the area wear the worried looks of men not quite sure that the militants have been flushed from the area. They are especially alert as they enter the village of Sultanwas, the scene of heavy fighting, where the acrid smell of a burnt-out government tank still lingers.

As the military fans out around us, we step through the swath of destruction. Concrete homes have been turned to cinder. Wiring pokes out from the piles of rubble where buildings once stood. Authorities say eighty percent of Sultanwas was destroyed in the fierce battle to flush the Taliban out of the village that the militants had commandeered for their headquarters.

The army claims to have secured Buner; the challenge now is to hold it. Authorities say police are patrolling, but a drive through the length of the district reveals that there is virtually no checking of anyone going in or out. Resident Shabar Khan, who remained through the fighting, is worried because he says the police are not prepared to defend the district if the Taliban comes back.

"We feel secure as long as the government is here, with the army in the background," he says. But "the police are too weak to restrain the Taliban if they re-emerge."

Janjua says of the estimated 1,000 Taliban extremists in the district, troops have killed about half that number. But with the operation effectively over, the question is: Where have the rest of the militants gone?