Accessibility links
Can Jeff Sessions Fairly Evaluate Sonia Sotomayor? Alabama Republican Sen. Jeff Sessions is one of the few federal bench nominees ever rejected by the Senate Judiciary Committee. Sessions was turned down because of claims that he had made racially insensitive comments in the past. In July, Sessions will have a chance to pass judgment on Sonia Sotomayor's nomination to the Supreme Court. But J. Gerald Hebert, who is among those who made claims against Sessions, wonders if Sessions can evaluate Sotomayor fairly. 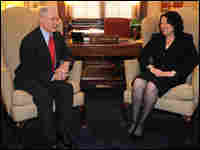 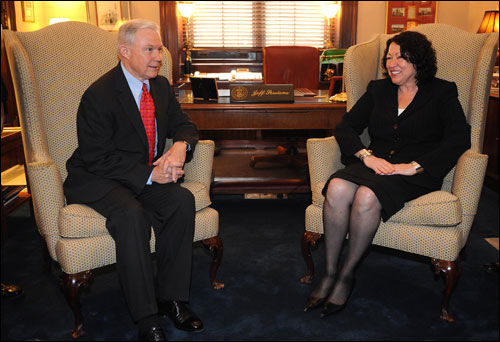 In July, Sen. Jeff Sessions has a chance to pass judgment on the nomination to the Supreme Court of Sonia Sotomayor, whom several conservative pundits have criticized as being racist. The lines at issue are from a speech Sotomayor gave back in October 2001, when she said:

I would hope that a wise Latina woman with the richness of her experiences would more often than not reach a better conclusion than a white male who hasn't lived that life.

But some wonder whether Sessions can evaluate Sotomayor fairly.

In 1986, then-U.S. Attorney Jeff Sessions was himself in the hot seat after being nominated by President Ronald Reagan for a federal judgeship. His nomination was later rejected by the Senate Judiciary Committee, in part because of testimony by J. Gerald Hebert, a former senior trial attorney in the civil rights division of the Department of Justice.

In a recent interview with NPR's Michel Martin, Hebert, who had several encounters with Sessions prior to his nomination by Reagan, recalls:

"When the NAACP would come up, he [Sessions] would snidely remark that it was a 'pinko' organization, or communist inspired," recalls Hebert. "[Sessions] seemed to have a unprogressive attitude toward race and equal opportunity."

Although its been over 20 years since Hebert's testimony, he stops short of saying Sessions — or his perspectives — may have changed.

"I would still have concerns, frankly, today, just knowing the public persona of Jeff Sessions that I've seen over the years," says Hebert.

But when asked if Sessions can be fair, Hebert says so reluctantly.

"I hope he can. I assume he can, and I think he can," he says. "I really don't know what's inside his head or his heart. But I do think that someone — hopefully over 20-something years — has learned something about the disadvantaged or minorities that clearly continue to struggle."

Hear the full interview with J. Gerald Hebert by clicking the "Listen" button in the upper left-hand corner.