Accessibility links
D.C. Metrorail Suffers Worst Crash In Its History At least seven people have been confirmed dead in Monday's subway crash in Washington D.C. A Metro train that had slowed near a station was slammed from the rear by the second train, which jackknifed into the air and fell atop the first train.

At least seven people have been confirmed dead in Monday's subway crash in Washington D.C. A Metro train that had slowed near a station was slammed from the rear by the second train, which jackknifed into the air and fell atop the first train.

Investigators here in Washington are trying to determine why safety precautions failed in a deadly train accident during the evening rush hour yesterday. Seven people were killed and dozens more injured when one subway train car slammed into the back of another. NPR's Katia Dunn reports.

KATIA DUNN: The wreck is the deadliest in the metro rails history. It happened around 5:00 when one train slammed into another that was stopped. The force tore open cars and threw train seats onto the track. At the chaotic scene on Monday night, local officials were concerned with rescuing passengers and finding the cause of the wreck. Jim Graham is a Washington councilman.

JIM GRAHAM: The first car on that train is demolished and squashed and that's what's leading to some of the lack of information we have, because somebody has got to sort through all of that. And so it's a horrendous, horrendous situation.

DUNN: Dozens of people were on the trains when they collided. NPR employee Jasmine Gars was one of them.

JASMINE GARS: It was like we rammed into a concrete wall. If you can imagine the train at full speed coming to an absolute sudden halt.

DUNN: Sabrina Webber stood with her neighbors and watched the rescue effort. She said she was in her house when it happened. She heard a tremendous boom and ran out the door.

SABRINA WEBBER: We saw one train on top of another train. Literally piled on top. The police and EMS had Jaws of Life coming out, peeling people out of the train.

DUNN: Valencio Coppen(ph) lives a few houses away from the site of the wreck.

VALENCIO COPPEN: And that's usually the train that I take. I just so happened to be working out at 4:00 and well, you know, kind of grateful for that. I definitely dodged a bullet.

NTSB Says It Warned Of Train Safety In 2006 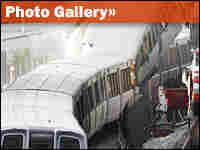 Transit authorities in Washington, D.C., were warned about the safety of their older-model subway cars in 2006 but did not follow through on recommendations to upgrade the cars or phase them out, a National Transportation Safety Board official said Tuesday.

At least nine people died in Monday's rush-hour crash of two trains, the deadliest accident in the history of the city's Metrorail system. More than 70 were taken to hospitals.

"We made recommendations in 2006 about the crashworthiness of the 1000-series cars," NTSB spokeswoman Debbie Hersman said at a news conference Tuesday. "We recommended to WMATA [Washington Metropolitan Area Transit Authority] to either retrofit those cars or phase them out of the fleet. They have not been able to do that and our recommendation was not addressed, so it has been closed in an unacceptable status."

NTSB investigators and fire department personnel were still sifting through the wreckage of the trains on the area's Red Line more than 15 hours after the crash. Firefighters brought in cranes and dogs as they conducted a meticulous search for victims in the mangled debris.

"In layers, we're taking the huge components of steel and metal to dis-encase and to check all the areas where folks may be," said Washington fire Chief Dennis Rubin. He said they hope to finish the process by Tuesday afternoon.

The crash occurred at about 5 p.m. EDT Monday near the border of Maryland and the nation's capital as both trains were headed into downtown Washington.

The first train was stopped on the tracks waiting for another train to clear the Fort Totten train station in an area of the track that is aboveground, transit officials said. That's when a second train plowed into the back of the waiting train, pushing at least one car up onto the tail of the first train. Officials said they did not know if the operator of the second train tried to apply the brakes or even saw the first train before the collision.

The operator of the second train, 42-year-old Jeanice McMillian of Springfield, Va., was killed in the crash. The other victims have not been named, pending notification of their families.

Metrorail spokeswoman Candace Smith said two men and seven women were killed and that all the victims were adults. Four bodies were recovered from the wreckage Monday and five more were removed Tuesday, she said.

Washington Mayor Adrian Fenty had said at an earlier news conference that seven people had died. Seventy-six people were treated at area hospitals; two of them were in critical condition, he said.

Officials are still working with the medical examiner's office to identify the dead.

By Tuesday morning, NTSB investigators were deep into a multipronged investigation, gathering information and records on the system's signals, track conditions, the operator's experience and training, cell and text transmissions, and train maintenance.

The focus appeared to center on the computerized signal system, which officials said was designed to keep trains apart.

Hersman said WMATA's procedures mandate that trains run on automatic control, rather than manual, during rush hour. Assuming that was the case, investigators will be examining the wreckage to try to determine whether the brakes were engaged and the operator could have seen the train in time to avert the crash, she said.

"We don't know at this point whether or not the operator could have seen the train ahead of them in time to stop," Hersman said.

Investigators may take in sample cars and conduct a sight-distance test to determine whether the operator could have seen the train ahead of her, after all of the victims and perishable evidence have been recovered from the scene, according to Hersman.

But she noted that investigators have no hope of getting information from the train that caused the crash because the second, older-model train wasn't equipped with event recorders, despite NTSB recommendations.

However, Hersman said authorities hope to determine the speed of the moving train by examining the recorders on the train that was hit. Since the newer-model train was stopped when it was struck, investigators hope its recorders will tell them how fast the train was propelled forward.

"We will find out what happened here, what caused this and put whatever resources are necessary into it to fix it so it will not happen again," he said.

Washington, D.C.'s subway system has experienced other tragedies, including:

• A subway train derailed in downtown Washington in January 2007. Sixty people had to be rescued from the train tunnel, and 20 were sent to the hospital.

• Two Metro track workers were struck and killed by an out-of-service train in November 2006. An investigation found that the train operator had failed to follow safety procedures.