Accessibility links
Ad Watch: Exploiting Public's Distrust Of Insurers A new ad by a major activist group blames the health care system's ills on greedy insurance companies and promotes a government-backed insurer as the cure. But the diagnosis is flawed. 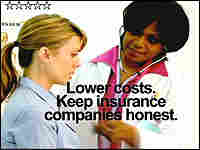 The "what if" ad campaign blames greedy insurance companies for rising costs in health care, saying that a public plan would lower those costs. Courtesy of Health Care For America Now hide caption 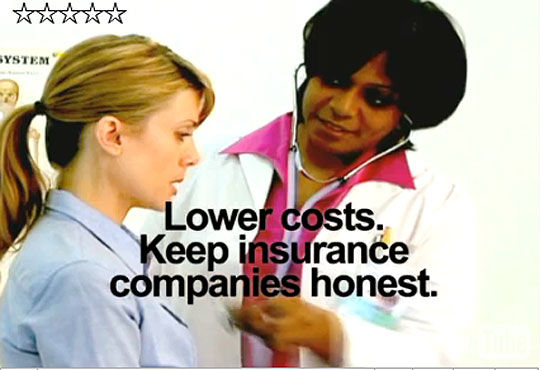 The "what if" ad campaign blames greedy insurance companies for rising costs in health care, saying that a public plan would lower those costs.

Watch The 'What If' Ad

'What If' Ad Campaign Web Site

A new ad by the major activist group Health Care for America Now blames the health care system's ills on greedy insurance companies and promotes a government-backed insurer as the cure. But the diagnosis is flawed.

Background: The "what if" ads by Health Care for America Now, an advocacy group funded by unions and other organizations favoring major health care changes, push one of the most controversial elements of the Democratic-backed legislation: a new government-run insurance plan that would compete with private insurers.

Produced by Fenton Ad Network, the ads are running in the home states of lawmakers of both parties who are on committees considering health bills. Some versions of the ads urge viewers to prod specific lawmakers, while others make a generic plea on behalf of the public plan. The cost, according to HCAN, is $1.1 million for a 10-day campaign.

Script (Iowa Version): "What if we stripped away the $13 billion insurance company profits? The $119 million CEO bonuses? The endless denials? The soaring co-pays and premiums? You'd have health care between you and your doctor — that's the president's plan. Keep the coverage you have now. President Obama's plan: Keep your doctor and current insurance. Or choose from a range of plans, including a public health insurance option to lower costs and keep insurance companies honest. Lower costs. Keep insurance companies honest. Why is Sen. Grassley opposed to giving you a choice? Tell Sen. Grassley it's your health. It should be your choice."

Visuals And Sound: As menacing music plays, the ad talks about insurers' profits and shows a printing press churning out money. A silhouetted figure, presumably a well-heeled insurance executive, boards a private jet. A red "denied" stamp, representing denial of coverage, is imposed over a picture of office cubicles. A monthly health care bill grows larger, then rips in half to show a series of scenes of doctors caring for female patients of different ages and races. Accompanying those snippets is upbeat music and a voiceover extolling the purported benefits of a public plan.

Politics: Democrats and President Obama say a government-run insurance plan would force private insurers, especially ones that now dominate local markets, to be more aggressive in holding down costs. Republicans in Congress, including Sen. Charles Grassley of Iowa, say that a public plan would have an unfair advantage over insurers and could wreck the private market, ultimately resulting in all health care being run by the government.

The ad seeks to exploit the public's well-documented distrust of insurers while capitalizing on support for a public plan, which does well in polls. It directs its harshest criticism at insurance companies in an effort to pressure GOP lawmakers without antagonizing them so much that bipartisan congressional negotiations are threatened. The ads are running in Iowa, New Mexico, Florida, Delaware, Louisiana, Arkansas, North Carolina, Maine, Oregon and Washington — states where key lawmakers either oppose a public plan or are wavering in their support of it.

Private insurers spend more on administrative costs, including profits and executive salaries, than the government does, but the major causes of health care's escalating costs are the rising prices and the increased use of medical services, including hospital stays, prescription drugs, new technologies and doctor visits. WellPoint Inc., one of the nations' largest insurers, has a net profit margin of less than 5 percent. "Insurance is a low-margin business," says Alwyn Cassil, a spokeswoman for the Center for Studying Health System Change, a Washington-based research group.

Some health care experts believe that public-plan premiums could be substantially lower — perhaps 20 percent less — than those charged by private plans. The projected lower premiums reflect the use of Medicare payment rates to pay providers, as well as lower overhead. However, Congress and the Obama administration haven't agreed on how a public plan would work, and some lawmakers in both parties say that Medicare payment rates shouldn't be used in a government-run plan. So savings estimates for a public plan are hypothetical at this point.