Accessibility links
Magazine's Clandestine Look At Life In North Korea Underground magazine Rimjingang is undermining the North Korean government's efforts to control the flow of information out of the country. Its undercover North Korean citizen journalists report on topics banned in the official press and smuggle their work out for publication. 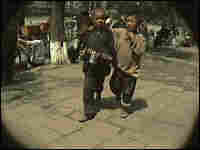 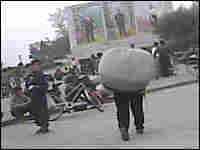 In another video grab, a man carries a heavy load of goods at the Haeju market in North Korea. Behind him is a propaganda poster of leader Kim Jong Il and his parents. Courtesy of Rimjingang magazine hide caption 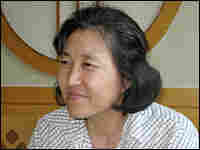 Choi Jin-I edits Rimjingang magazine in Seoul. She previously worked as a poet in Pyongyang. She says the magazine gives the people of North Korea a "voice of their own." Anthony Kuhn/NPR hide caption 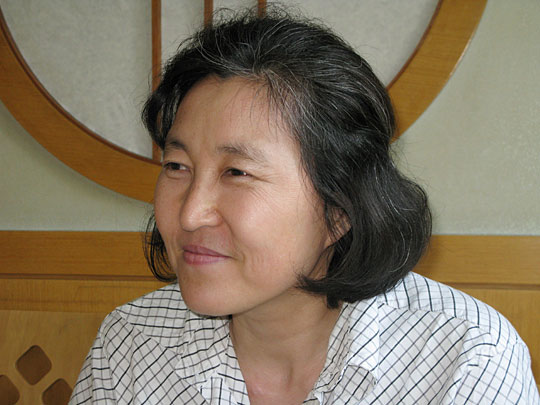 Choi Jin-I edits Rimjingang magazine in Seoul. She previously worked as a poet in Pyongyang. She says the magazine gives the people of North Korea a "voice of their own." 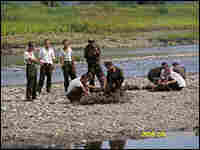 In this photo by a Rimjingang reporter, North Korean soldiers cook corn on the Taedong River just outside Pyongyang in North Korea. Courtesy of Rimjingang magazine hide caption 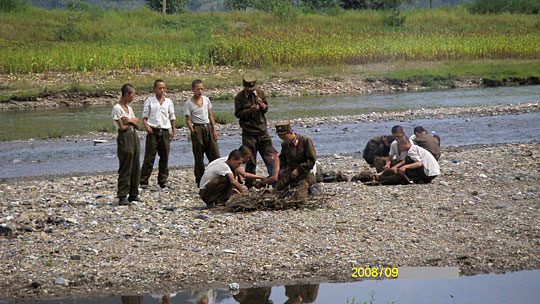 In this photo by a Rimjingang reporter, North Korean soldiers cook corn on the Taedong River just outside Pyongyang in North Korea.

An underground magazine — and its undercover North Korean citizen reporters — is undermining the North Korean government's efforts to control the flow of information out of the country.

The reporters take huge risks to report on topics banned in the official press and then smuggle their recordings, writings and videos out of the country.

One such video shows a private market in Haeju, a port city on North Korea's western coast. It's just before 3 p.m., and merchants and their customers are leaning against bicycles or squatting on the pavement, waiting for the market to open. The merchants' backs are bent under the weight of huge sacks containing their wares.

This video was shot secretly by a reporter for Rimjingang magazine, which is edited in Seoul by Choi Jin-I, a poet who fled North Korea in 1998. The video's visual irony tickles Choi.

"That merchant is straining under a heavy burden as he walks beneath a propaganda poster of leader Kim Jong Il and his parents," she says, laughing.

The markets began to appear after the death of North Korean leader Kim Il Sung in 1994; the government officially recognized them in 2003. Choi explains that in order to keep the markets and their profits under their control, North Korean officials have limited the markets' business hours, restricted the age of merchants who can sell, and set the prices of goods. But all these restrictions, Choi says, just fuel black markets.

"Those in power will only let the markets grow to the extent that they do not threaten them. But obviously, because of capitalism's inherent powers, the markets will continue to grow, regardless of what those in power do," she says.

Rimjingang is named for a river that flows down the Korean peninsula from north to south. The bimonthly magazine's six reporters are all North Koreans without formal journalism training. They smuggle their work into China, where Choi trains them and discusses their assignments, before they return to North Korea.

"Training makes a big difference. I'm impressed by their lively writing. It took a while for me to convince them that what we're doing is good for society, and we weren't trying to overthrow the regime. But they now realize the importance of what they're doing," she says.

The publication receives modest funding from the National Endowment for Democracy in Washington, D.C. A Tokyo-based journalists' group, Asia Press, publishes a Japanese version of Rimjingang.

Donald Macintyre, a former Seoul bureau chief for Time magazine, is editing Rimjingang's soon-to-be-published English edition. He says that the trend driving the magazine is an increased flow of goods, people and information between North Korea and its neighbors.

"Information is also now flowing the other way, from North Korea to the outside world. North Koreans are talking to journalists and academics and aid workers about what's happening inside their country. They're calling up relatives by cell phone. ... If you're near the China border in North Korea, you can use a Chinese cell phone and you can call Seoul," Macintyre says.

Another video by a Rimjingang reporter shows a dirt road in the countryside on a sunny day. A band of grade-school students comes down from the hills, where they've been picking acorns.

One student says they're assigned to pick nearly 40 pounds of acorns each in three days and then give them to their school. Choi says this is exploitation. She describes the back-and-forth between the kids and the cameraman.

"The cameraman is asking what schools they go to, but they are scared to answer. 'What, do you think I'm a spy?' he says. 'Why are you shaking with fear? You make me sound like I'm trying to arrest you,' " Choi explains.

Choi says that if the government discovered that her reporters were committing journalism, they would probably be executed as spies. That's why they usually don't tell their interviewees that they're interviewing them. They hide their cameras in bags and shoot through holes.

Rimjingang's street-level view of current events in North Korea is full of subversive humor. For example, Choi reads from an interview with a North Korean state-owned company manager who mocks the country's first nuclear test in 2006.

"'Gen. Kim Jong Il completely succeeded in conducting a powerful nuclear test that was incapable of killing even a single person or even a fish. No other country in the world dares to carry out such an experiment,' " she reads.

Choi once worked as a poet at the official Chosun Writers' Union in Pyongyang. She fled across the Tumen River into China in 1998 and eventually made it to Seoul. She says she is delighted to have found such a meaningful job.

"The birth of Rimjingang means that the North Korean people have a voice of their own, with which they can speak out. For people outside the country, it means that they can communicate with real North Koreans, not just officials," she says.

Copies of Rimjingang are mailed into North Korea. Most of them are probably intercepted and destroyed, but Choi believes that word of her publication will eventually spread.