Accessibility links
Moby Returns With A Thoughtful Vengeance A full decade after his landmark album Play, techno musician Moby has released an album called Wait for Me. Music critic Robert Christgau thinks it's almost worthy of its great predecessor. 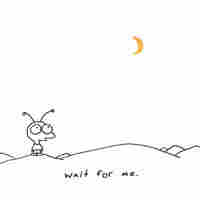 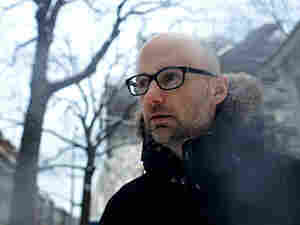 Moby recorded his latest album, Wait for Me, in his home studio. Getty Images hide caption

In June 1999, Moby released the album of a lifetime: Play. Play was a surging and receding construct of techno beats and blues and gospel samples. It went platinum, not owing to radio or dance-floor exposure, but because every track was eventually recycled in soundtracks and ads. Even when it was sad, it was happy.

Moby released three worthy albums at three-year intervals in the wake of Play. But not until June 2009 did he give us anything so consistently melodic and compelling — which is not to say it's fun. The album is called Wait for Me.

Where Play concluded by decelerating into a sustained thoughtfulness, tempos are slow throughout Wait for Me. It never hints at celebration. Recording took place in Moby's home studio on New York City's Lower East Side; nine of the 16 tracks are totally instrumental. Most of the vocal parts are by friends, but that doesn't mean Moby has abandoned sampling's fascination with decayed sound. In "Pale Horses," he gave the singer a $70 microphone, then fed the recorded vocal into an old tape machine before rerecording it onto the track.

If Wait for Me establishes anything beyond its own right to stand there and be beautiful, it's that money doesn't guarantee happiness. Moby is a rich and articulate man who has had more than his share of political moments. But on this record, he's not indicting wrongdoers or translating the injustice he's seen into music. The pain he expresses lyrically and embodies sonically is his own; you wonder whether there's a death or a breakup aching underneath.

But there's grandeur and dignity and calm acceptance in this music, too — a sense of spiritual accomplishment, even transcendence. The techno discos where Moby launched his career made a big deal of the chillout room, where dancers could collect themselves in the aftermath of Ecstasy. But most of the music designed for those spaces felt empty compared with Wait for Me. Moby describes the final track, "Isolate," as "Nick Drake with a drum machine and no vocals." Chill.

Listen to Wait for Me in its entirety by clicking here.