Accessibility links
Regina Spektor Hears Magic In The Inexplicable The rising young singer-songwriter writes about all those things you're not supposed to talk about at parties. Her music defies explanation, but she likes it that way. 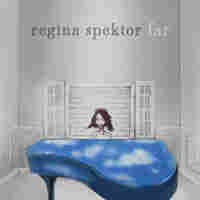 Far is the latest album from Regina Spektor. hide caption 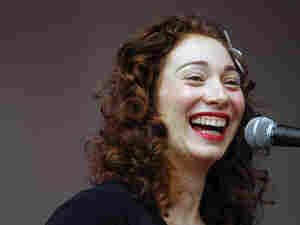 Singer-songwriter Regina Spektor was born in Moscow and came to the United States when she was 9. Getty Images hide caption

If you ever have trouble remembering lyrics, Regina Spektor has a song for you.

"It's like forgetting the words to your favorite song," Spektor sings in "Eet," a track from her new album, Far.

The 29-year-old singer-songwriter recently sat down with NPR's David Greene to talk about her life, her latest album and her unique approach to remembering lyrics.

"It's more about the sound than the food intake," she says in reference to the phonetic spelling of her song "Eet." The spelling hearkens back to Spektor's childhood: She was born in Moscow and came to the U.S. at the age of 9. She had to learn English, and she initially knew words only by their sound.

"I knew all this Beatles music," Spektor says. "I knew the songs phonetically."

She knew the words "happy" and "forever" because they were in The Beatles' songs, but she didn't know what they meant. She then began to associate sound with meaning.

"It was like my whole experience of that music was out of focus, and somebody put the perfect glasses on me, and all of a sudden I could see everything," she says.

Spektor is a petite woman with striking red hair and bright lipstick. She writes about what's on her mind, and her music often defies explanation. But she says that doesn't concern her.

"If I could explain every word of this song, then I wouldn't have been very inspired when I wrote it. I would have been more crafty and intellectual," she says. "I would really hate it if I could call up Kafka or Hemingway or Salinger and any question I could throw at them they would have an answer. That's the magic when you read or hear something wonderful — there's no one that has all the answers."

However, that's not to say she doesn't want people to look for deeper meaning behind her songs.

"It's not like I have all the answers," she says.

You can hear Regina Spektor's new album in its entirety by clicking here.