Accessibility links
Obama Ups Iran Rhetoric In the fourth formal news conference of his presidency, President Obama said he was "appalled and outraged" by Iran's violent reaction to protests, but he resisted describing potential consequences for the regime's actions. Obama also talked about the cost of health care reform and the role of a public insurance plan.

In the fourth formal news conference of his presidency, President Obama said he was "appalled and outraged" by Iran's violent reaction to protests, but he resisted describing potential consequences for the regime's actions. Obama also talked about the cost of health care reform and the role of a public insurance plan.

Today, President Obama condemned the violence against protestors in Iran. Mr. Obama's comments came during a midday news conference. The other big topic was the administration's push to rework health care. In a moment we'll dig deeper into the president's proposal for a government-run health care option.

First, NPR's Don Gonyea reports on what President Obama had to say at the White House.

DON GONYEA: The president began the news conference with an opening statement about Iran.

President BARACK OBAMA: The United States and the international community have been appalled and outraged by the threats, and the beatings and imprisonments of the last few days. I strongly condemn these unjust actions, and I join with the American people in mourning each and every innocent life that is lost.

GONYEA: But the president is still being careful. He focuses on the violence and does not call the election a fraud, though he does say there are serious questions. He also says it remains his goal to engage Iran in negotiations aimed at ending it's nuclear program. But he said Iran has choices to make about how it is viewed by the rest of the world.

Pres. OBAMA: There is a path available to Iran, in which their sovereignty is respected, their traditions, their culture, their faith is respected. But one in which they are part of a larger community that has responsibilities and operates according to norms and international rules that are universal. We don't know how they're going to respond yet. And that's what we are waiting to see.

GONYEA: The president denied that he is toughening his rhetoric toward Iran. He said his statements have been consistent. The president said the U.S. can't do anything that would be portrayed by the Iranian government as meddling. Republicans in Congress have criticized him for not being forceful enough. They include Senator John McCain. Mr. Obama reacted.

Pres. OBAMA: Yeah, I think that all of us share a belief that we want justice to prevail. But only I'm the president of the United States.

GONYEA: Finally on Iran, the president was asked if he had himself watched the video, distributed via the Internet, of the death of the young Iranian woman who was fatally shot during one demonstration.

Unidentified Woman: Have you seen this video?

Pres. OBAMA: I have.

Unidentified Woman: What is your reaction?

GONYEA: He said it's important that the Iranian people know that we are watching what's happening and that they are not alone in this process. On the news conference's other main topic, the president defended the high price tag of overhauling the health care system. He said costs will be offset through savings and new efficiencies. Still the trillion dollar plus cost has become a big part of the campaign against the White House push for health care changes. Mr. Obama said that argument ignores the cost of doing nothing.

Pres. OBAMA: Premiums have been doubling every nine years and going up three times faster than wages. The U.S. government is not going to be able to afford Medicare and Medicaid on its current trajectory. Businesses are having to make very tough decisions about whether we drop coverage or we further restrict coverage.

GONYEA: And the president was asked about concerns voiced to Congress by big health insurers, that forcing them to compete with the government-provided plan would lead to their demise.

Pres. OBAMA: Why would it drive private insurance out of business? If private insurers say that the marketplace provides the best quality health care, if they tell us that they're offering a good deal, then why is it that the government, which they say can't run anything, suddenly is going to drive them out of the business? That's not logical.

GONYEA: The news conference lasted nearly an hour with the president answering critics and making his case on a pair of difficult issues, both of which will be occupying a lot of his time in the months ahead. 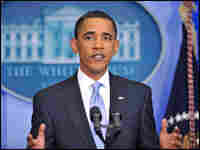 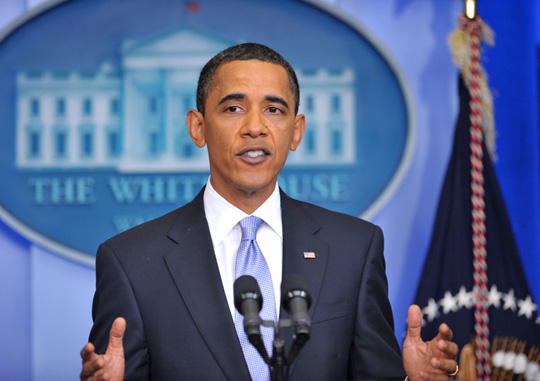 During his midday news conference Tuesday, President Obama used his strongest language to date to denounce the Iranian government's violence against election protesters.

From The White House

As It Happened: Obama's News Conference

President Obama on Tuesday used his strongest language to date to denounce the Iranian government's violence against election protesters, condemning the deadly crackdown and expressing outrage at "threats, beatings and imprisonments."

But, during a televised news conference, the president stopped short of suggesting any formal action against the country.

"We don't know yet how this thing is going to play out," he told reporters who had packed the White House briefing room for a session dominated by Iran and the president's stalled health care overhaul plan.

"I know everyone here is on a 24-hour news cycle," the president said dryly. "I'm not."

Obama also pushed back hard against Republican critics like Sen. John McCain of Arizona, who have castigated the White House for what they have characterized as a timid response to the violence against demonstrators questioning President Mahmoud Ahmadinejad's re-election.

"I think John McCain has genuine passion about many of these international issues," Obama said. "But only I'm the president of the United States.

"And I've got responsibilities in making certain that we are continually advancing our national security interests and that we are not used as a tool to be exploited by other countries," he said.

The president, whose comments came in response to sharp questioning about his response to the violence in Iran, noted that statements he's made have been "mistranslated" to suggest that he's encouraging rioters.

He said that government officials in Iran have also suggested that the CIA had a hand in organizing protests — among accusations he characterized as "patently false and absurd."

"I have made it clear that the United States respects the sovereignty of the Islamic Republic of Iran and is not interfering in Iran's affairs," Obama said.

He defended what he called the consistency of his response and attempted to explain the fine line the administration has been walking since election protests erupted: responding to the violence, but maintaining a "path" for Iran's engagement in the larger international community.

"But we also must bear witness to the courage and dignity of the Iranian people, and to a remarkable opening within Iranian society," he said. "We deplore the violence against innocent civilians anywhere that it takes place."

When asked if he had seen a widely disseminated video showing the death of an Iranian woman demonstrator who had been shot in the chest, the president said he had.

However, he again stepped back from directly questioning the results of Iran's election.

"We didn't have international observers on the ground," he said. "We can't say definitively what exactly happened at polling places throughout the country."

The president's appearance before the White House press corps also kicked off a week of his health care hard sell and his full-court press to bolster the stalled fortunes of his overhaul plan.

But, when pressed about whether he would insist that any overhaul include a public insurance plan, the president demurred.

"We are still early in the process," he said. "We have not drawn lines in the sand other than reform has to control costs" and provide relief for those without insurance or who are underinsured.

He attempted to humanize the issue by referring to a Wisconsin woman he recently met who, despite her husband's insurance, is still $50,000 in debt after a double mastectomy to treat her breast cancer.

The president, as he has done repeatedly in the past, characterized a health care overhaul as an economic imperative: The current system, he said, is not only burdening families and businesses, but is the "primary driver of our federal deficit." And to solve that will require more than "tinkering around the edges."

But the administration was knocked on its heels last week when the nonpartisan Congressional Budget Office estimated that the government cost for health care plans now under consideration in the Senate would top $1 trillion.

And Tuesday morning, large insurers told Congress that the president's plan to offer a government-managed — and perhaps subsidized — public insurance option would put them out of business.

When asked about the claim that insurers would not be able to compete with a public insurance option, Obama said their argument "defies logic."

"If insurers are doing their job," he said, "they should be able to compete."

A recent NBC/Wall Street Journal poll found that 76 percent of those surveyed said it was "extremely" or "quite" important that people have a public insurance option. But only 33 percent of those surveyed said that the president's plan was a good idea, from what they knew of it. Thirty-two percent said it was a bad idea, and 30 percent had no opinion.

The administration and its surrogates see opportunity in those numbers. The Democratic National Committee, in concert with the White House, on Tuesday announced the launch of a Web site stocked with "genuine health care stories" that it says underscore the need for a comprehensive overhaul.

"I'm very optimistic about the progress" Congress is making on the overhaul, Obama said, an effort that "must and will be paid for" through "savings and efficiencies within the health care system."

The House is scheduled to vote late this week on a controversial climate change bill; opponents have raised concerns about the costs of moving to cleaner energy, but some environmentalists say compromises on the bill have stripped out key elements they support. The president on Tuesday made a strong pitch for its passage, characterizing it as a historic bill that will "spark a clean energy transformation that will reduce our dependence on foreign oil."

He also defended the stimulus package that has been losing support with the public as the nation's job situation continues a bleak path. The president acknowledged that unemployment will hit 10 percent despite earlier administration assertions that the level would remain below 8 percent.

"In the absence of the stimulus, I think our recession would be much worse," he said.

"Without the Recovery Act, we know for a fact that states, for example, would have laid off a lot more teachers, a lot more police officers and a lot more firefighters," he said.

The American people, Obama said, "have a right to feel like this is a tough time now."

Speaking of tough times, the president bristled when asked about his occasional smoking habit — a day after he signed a tobacco regulation bill.

"I think it's fair to just say that you just think it's neat to ask me about my smoking as opposed to it being relevant to my new law," he said.

"But that's fine. I understand. It's an interesting human interest story," the president said, acknowledging that he struggles with the habit, has "fallen off the wagon," but is "95 percent cured."