Accessibility links
Senate Apology For Slavery Gets Mixed Reaction The Senate recently passed a resolution apologizing for more than two centuries of slavery in the U.S. and for the years of racial segregation that followed. But two individuals, both of whom have direct ties to slavery, share their mixed feelings about the recent apology.

The Senate recently passed a resolution apologizing for more than two centuries of slavery in the U.S. and for the years of racial segregation that followed. The non-binding resolution is seen as a symbolic gesture, which now heads to the House of Representatives for voting.

Katrina Browne is producer of the documentary film Traces of the Trade: A Story from the Deep North, which traces Browne's New England ancestors to the country's largest slave trading family. Daniel Smith is a former civil rights worker and son of a former slave. The two talk about their direct ties to slavery and explain why they have mixed feelings about the recent apology. 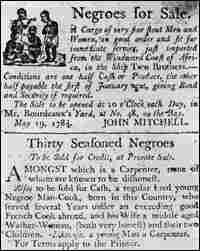 1784: Two advertisements in a colonial broadside newspaper: one for a cargo of slaves just imported from Africa on the ship Two Brothers, and one for 'Thirty Seasoned Negroes', including a carpenter, a cook and the cook's family. MPI/Getty Images hide caption 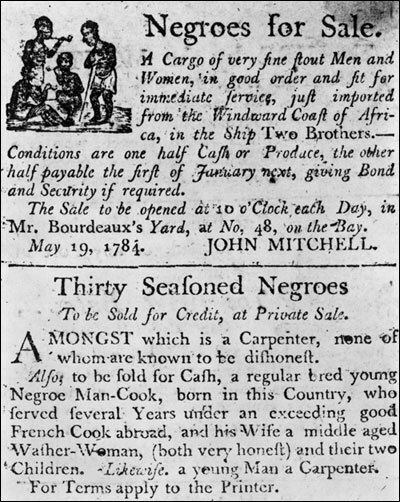 1784: Two advertisements in a colonial broadside newspaper: one for a cargo of slaves just imported from Africa on the ship Two Brothers, and one for 'Thirty Seasoned Negroes', including a carpenter, a cook and the cook's family.

Whereas during the history of the Nation, the United States has grown into a symbol of democracy and freedom around the world; (Referred to House Committee after being Received from Senate)

IN THE HOUSE OF REPRESENTATIVES

Referred to the Committee on the Judiciary

Apologizing for the enslavement and racial segregation of African-Americans.

Whereas during the history of the Nation, the United States has grown into a symbol of democracy and freedom around the world;

Whereas the legacy of African-Americans is interwoven with the very fabric of the democracy and freedom of the United States;

Whereas millions of Africans and their descendants were enslaved in the United States and the 13 American colonies from 1619 through 1865;

Whereas Africans forced into slavery were brutalized, humiliated, dehumanized, and subjected to the indignity of being stripped of their names and heritage;

Whereas many enslaved families were torn apart after family members were sold separately;

Whereas the system of slavery and the visceral racism against people of African descent upon which it depended became enmeshed in the social fabric of the United States;

Whereas slavery was not officially abolished until the ratification of the 13th amendment to the Constitution of the United States in 1865, after the end of the Civil War;

Whereas after emancipation from 246 years of slavery, African-Americans soon saw the fleeting political, social, and economic gains they made during Reconstruction eviscerated by virulent racism, lynchings, disenfranchisement, Black Codes, and racial segregation laws that imposed a rigid system of officially sanctioned racial segregation in virtually all areas of life;

Whereas the system of de jure racial segregation known as `Jim Crow', which arose in certain parts of the United States after the Civil War to create separate and unequal societies for Whites and African-Americans, was a direct result of the racism against people of African descent that was engendered by slavery;

Whereas the system of Jim Crow laws officially existed until the 1960s--a century after the official end of slavery in the United States--until Congress took action to end it, but the vestiges of Jim Crow continue to this day;

Whereas African-Americans continue to suffer from the consequences of slavery and Jim Crow laws--long after both systems were formally abolished--through enormous damage and loss, both tangible and intangible, including the loss of human dignity and liberty;

Whereas the story of the enslavement and de jure segregation of African-Americans and the dehumanizing atrocities committed against them should not be purged from or minimized in the telling of the history of the United States;

Whereas those African-Americans who suffered under slavery and Jim Crow laws, and their descendants, exemplify the strength of the human character and provide a model of courage, commitment, and perseverance;

Whereas on July 8, 2003, during a trip to Goree Island, Senegal, a former slave port, President George W. Bush acknowledged the continuing legacy of slavery in life in the United States and the need to confront that legacy, when he stated that slavery `was . . . one of the greatest crimes of history . . . The racial bigotry fed by slavery did not end with slavery or with segregation. And many of the issues that still trouble America have roots in the bitter experience of other times. But however long the journey, our destiny is set: liberty and justice for all.';

Whereas President Bill Clinton also acknowledged the deep-seated problems caused by the continuing legacy of racism against African-Americans that began with slavery, when he initiated a national dialogue about race;

Whereas an apology for centuries of brutal dehumanization and injustices cannot erase the past, but confession of the wrongs committed and a formal apology to African-Americans will help bind the wounds of the Nation that are rooted in slavery and can speed racial healing and reconciliation and help the people of the United States understand the past and honor the history of all people of the United States;

Whereas the legislatures of the Commonwealth of Virginia and the States of Alabama, Florida, Maryland, and North Carolina have taken the lead in adopting resolutions officially expressing appropriate remorse for slavery, and other State legislatures are considering similar resolutions; and

Resolved by the Senate (the House of Representatives concurring), That the sense of the Congress is the following:

(A) acknowledges the fundamental injustice, cruelty, brutality, and inhumanity of slavery and Jim Crow laws;

(B) apologizes to African-Americans on behalf of the people of the United States, for the wrongs committed against them and their ancestors who suffered under slavery and Jim Crow laws; and

(C) expresses its recommitment to the principle that all people are created equal and endowed with inalienable rights to life, liberty, and the pursuit of happiness, and calls on all people of the United States to work toward eliminating racial prejudices, injustices, and discrimination from our society.

(2) DISCLAIMER- Nothing in this resolution--

(A) authorizes or supports any claim against the United States; or

(B) serves as a settlement of any claim against the United States.