Accessibility links
Tennis, The Grunting Game? The Wimbledon Championships began on Monday, and authorities are worried about safety — that is, the safety of the audience's ears subjected to the shrieks, screeches and grunts that tennis players release when playing hard and heavy on the court. ESPN analyst Luke Jensen, a 1993 French Open doubles champion, and USA Today sports columnist Christine Brennan explain why some tennis officials say players' loud on-court grunts are a distraction to the sport. 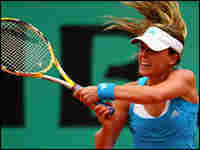 Tennis professional Michelle Larcher De Brito is at the center of an ongoing debate over whether players' loud on-court grunts are a distraction to the sport. Ryan Pierse/Getty Images hide caption

What Is A Grunt?

A short montage of grunts and shrieks on the tennis court by various tennis players.

For tennis fans around the world, the start of summer is also the start of Wimbledon. The All England Lawn Tennis and Croquet Club, known best for its air of gentility, its fresh grass courts and chalky white lines, its sweet strawberries with cream, is now also the place where the Grand Slam Committee will meet this week to discuss ... grunting.

The noise, emitted by tennis players as they swing their racket and make contact with the ball, is described as grunting, shrieking and even sometimes screaming.

Famous players, including Michelle Larcher De Brito, Maria Sharapova, Serena Williams and Rafael Nadal are known for their unique grunts. But when the high-pitched scream of a player in last month's French Open resulted in serious complaints from her opponent, the Grand Slam Committee decided a new rule on noisy distractions might be in order.

"We are talking about an incessant, nonstop, active grunting that's almost shrieking," says Christine Brennan, sports columnist for USA Today. And Brennan is concerned that grunting is becoming more an issue of gamesmanship than technique.

"It's time to crack down on this," she insists.

But although Luke Jensen, head coach of women's tennis at Syracuse University, agrees that too much noise from a player is unwarranted, he sees benefits to teaching grunting as a coaching technique.

"I had a player that was so wound up with emotions that we encouraged the grunting, the groaning," says Jensen. "And she actually does play better because of it."

Until the committee reaches a final decision, tennis fans will be left to endure — or enjoy — shrieks that, at 101 decibels, rival the sound of police squad car sirens or commercial airlines at takeoff.

Hear the full conversation on how and why grunting has invaded the world of tennis by clicking the "Listen" button in the upper left-hand corner of this page.

Grunts, Screams And Other Noises From Tennis June 20, 2009