Accessibility links
Girls Just Wanna Have ... Networking? When Republicans first rankled at Sonia Sotomayor's membership in an elite women's group, Sotomayor defended that membership. But she has since cut ties with her female club, saying she does not want to distract lawmakers deciding her appointment to the Supreme Court. Commentator Veronica Arreola says women's groups play an important role in righting the effects of centuries of gender discrimination. 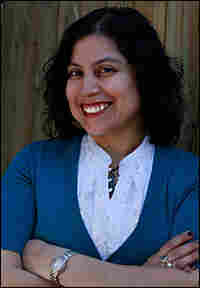 Arreola is a feminist, mom and writer. She is assistant director of the Center for Research on Women and Gender at the University of Illinois, Chicago. Courtesy of Veronica Arreola hide caption

As a vocal feminist, my opinions are often antagonistically questioned at parties and backyard barbecues. What is it about wanting to support women and women's rights that makes others, especially men, so uncomfortable? I find myself asking this same question in light of U.S. Supreme Court justice nominee Sonia Sotomayor's recent decision to leave a women's networking club.

Some Republican senators were rankled over Sotomayor's membership in the Belizean Grove, an all-women's club that brings together influential women on retreats. The senators called it discriminatory and cited the American Bar Association's rule against joining any group that discriminates by race, sex, religion or nationality. But is it really discrimination?

Not by a long shot.

Ask people about the "old boys' club" and they know it is a way to describe the group of mostly men who network and pass on vital professional information to each other. It is the old boys' club that whispers in a young man's ear during high school: "Spend your summers as a caddy. You'll meet the power brokers that way." It points a young college student in the direction of an internship in New York's most prestigious law firm. For years, the old boys' club had a "no girls allowed" policy. Today, some women might belong — you know, the ones who laugh at inappropriate jokes and don't make too many waves. But for many women, the gate is still locked.

It is that environment that pushes women to seek out and join women's clubs.

While I am not a member of such an economically elite group as the Belizean Grove, I am a member of a women's network in Chicago. It may be the third largest city in the U.S., but it's like a small town when it comes to women leaders. I have a group of women I can call, e-mail or chat with at events to discuss the next step in my career, how to be a better supervisor and sometimes, yes, discuss the work-family balance. I do find that sometimes turning to a wise woman, Latina or not, is essential to finding direction in my life. I value each woman who has cut a path in her field of expertise and is willing to leave guideposts for me and others to follow.

The women I know in networking clubs are eager for inclusion, not exclusion. They are striving for diverse circles, not ones made of people who look/act/think like they do. Most of all, some of the older women I know are looking for relief — they want us young whippersnappers to hurry up and take the reins so they can ride off into the sunset.

For centuries, the old boys' club supported men in powerful positions and made it difficult for women to rise up through the ranks. Now that some of those top spots are opening up to women, too, all-female clubs are providing women with valuable networks and training in networking — things the old boys' club provided men for centuries, and still provide. Lest we forget, men's clubs are not a thing of the past.

Women's clubs don't aim to exclude, but they do aim to provide women with something that has, historically, been denied them.

I hope one day that women's clubs will die out because men's clubs have died out, too. I hope both are replaced with professional clubs, plain and simple. But right now, we need women's clubs to support women professionals and help right the gender discrimination of the past.