Accessibility links
White House Hosts Meeting on Immigration While immigration has been thrown on the back burner in favor of issues like health care, President Obama will meet with members of Congress to discuss changes he promised on the trail. But his vision for immigration policy may not be politically viable. 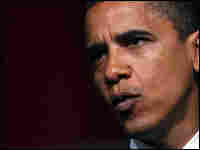 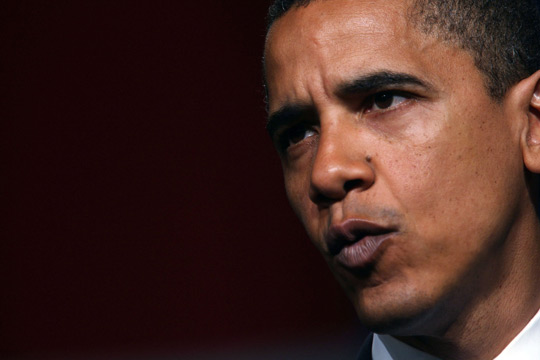 Then-presidential candidate Barack Obama speaks during a June 2007 candidates forum at the National Association of Latino Elected and Appointed Officials. Immigrant advocates say the strong Latino vote for Obama last fall makes it more important that he address the issue.

After two delays and months of hand-wringing among immigrant advocates, President Obama finally meets with members of Congress Thursday to take up the thorny issue of immigration.

During the campaign Obama pledged a sweeping overhaul in his first year in office. But so far the issue has been pushed off for other priorities, and expectations remain low.

"It's like the opening whistle, and it means that the debate is under way in a very serious manner," says Angela Kelly of the Center for American Progress.

Kelly has spent years lobbying Congress to revamp immigration laws, and she is heartened that Obama has repeatedly expressed support, not only for stepped-up security at the border and workplace but also for a highly contentious plan to legalize some 12 million undocumented immigrants. If he hasn't shown the same urgency as with, say, health care, Kelly is still hopeful.

"You know there's no grave disappointment on my end yet," she says. "But on the other hand, the clock is ticking and we need to move forward. And the fact is, there isn't any other viable option on the table."

That's true, but it's also not clear that Obama's vision for overhaul is politically viable. Thursday's meeting will include some lawmakers who are dead set against any legalization, and Roy Beck, of the restrictionist group Numbers USA, believes this could be a good sign.

"By having strong senators and congressmen on the other side of this issue," Beck says, Obama "will be able to say, 'Hey, look, see how hard this is going to be? See how far apart we are?' "

On the other hand, Beck wonders if including both sides means that Obama is really serious about changes in immigration policy, since winning over Republicans is the only way it will happen. Immigrant advocates say the strong Latino vote for Obama last fall also makes it more important that he address the issue. Still, given that new immigration plans failed twice in Congress in recent years, Beck says the safe bet is that the president won't press for much anytime soon.

Still An Important Issue In Some Areas

If immigration has receded as an issue on Capitol Hill, it hasn't in parts of the country that have seen an influx of illegal migrants in recent years. Christine Neumann-Ortiz heads Voces de la Frontera, an immigrant advocacy group in Wisconsin, and says the delay in tackling the issue is "tragic."

Neumann-Ortiz estimates 30,000 people marched on May 1 in Milwaukee to demand driver's licenses for the undocumented and in-state tuition for students whose parents brought them to the U.S. without visas. Her group also helps those arrested when immigration agents raid their homes.

"Frankly," she says, "under the Obama administration there's no change in terms of the rate of people who come to us seeking help."

Kelly at the Center for American Progress says the myriad problems of the nation's broken immigration system aren't going away.

She hopes the White House and Congress get serious about them at Thursday's meeting, but if not, she's certain they'll have to at some point.

Immigrants Urged Not To Participate In Census May 11, 2009
Foreign Policy: The List: How Sotomayor Sees the World May 29, 2009