Accessibility links
Todd Snider: Songs For The Unprepared Singer-songwriter Todd Snider promises that his new album, The Excitement Plan, is "your surefire cure for the hard times." He guarantees it right there in the liner notes. In the midst of personal struggle with addiction, rehab and depression, he finds the humorous upside to the downside of life. 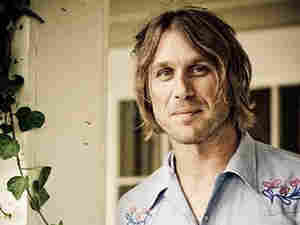 Above all, Todd Snider says he wants to be a good husband before he's a good songwriter. Todd Purifoy hide caption

Singer-songwriter Todd Snider promises that his new album, The Excitement Plan, is "your surefire cure for the hard times." He guarantees it right there in the liner notes: "You can trust me."

Snider tries to find the humorous upside to the downside of life. And he's seen a lot of that downside: drug and alcohol addiction, multiple stints in rehab and depression. For Snider, songwriting has been a lifeline.

"If it doesn't have some therapeutic element in it for me, then I'll move on from it," Snider says.

A deep vein of pain moves through the songs on The Excitement Plan. In an interview with Melissa Block, Snider says he's attracted to the work of John Prine, Shel Silverstein and Billy Joe Shaver — they all write songs that are sad, but are funny, too.

"Greencastle Blues," in particular, touches on this approach. Snider smiles when he says he wrote it after being held "political prisoner," according to him, in Greencastle, Ind., for marijuana possession.

"While I was in there, I was kicking myself," Snider says. "I thought, 'Here I am in jail, still going to jail late into my 40s every once in a while.' I started trying to sing a song to explain what happened to my wife. And I was looking for a bright side."

The song asks when it's too late to learn from your mistakes, and Snider says he's still waiting to figure many things out.

Writing Out Of A Hole

In and out of rehab three times, Snider struggled with drugs and alcohol. He was also diagnosed with bipolar disorder, which he says finally explains his depression.

"I don't know why a person with a job as good as mine, with as much freedom as me, would get as depressed as I can get," Snider says.

The intersection of these struggles and his music provides Snider with a way to get out of "the swings."

"I write a lot of songs going in and out of those types of things," Snider says. "I kind of write myself out of those holes."

Many of the songs on The Excitement Plan were written under those circumstances, but sometimes they do come from a happy place. More than anything, Snider says he just wants to be a good husband before he's a good songwriter.

Amid all this pain, however, Snider does tap into a quirky sense of humor. "Money, Compliments, Publicity (Song Number Ten)," in particular, delivers a couple of biting lines: "I went to see this therapist / She said, 'Just do the best you can do' / Do the best you can do / I was hoping for something more specific."

"It was funny," Snider says. "The other day I was doing an interview with The New York Times. The guy said, 'Do you have a therapist?' I said yes. He said, 'She must really dislike you.' And I thought, 'Man, what a thing to tell somebody, that their therapist doesn't like him. Well, this it for me, pal."

"America's Favorite Pastime" is a song for the unprepared. It was inspired by the Pittsburgh Pirates baseball player Doc Ellis, who, in 1970, pitched a no-hitter under the influence of LSD.

"I felt connected to that, because many times I have come to work unprepared and still done OK," Snider says. "I think Doc Ellis gives unprepared people everywhere someone to look up to. He didn't do it on purpose — he thought he was pitching the next day."

There's no moral to this story except not to judge a book by its cover.

"You don't always know who's going to be able to deliver or have the solution. You can't rule somebody out just because of what you know about them," Snider says. "You can't judge a book, and not even if you'd read it."