Accessibility links
'Internetainers' Make Money Off YouTube Hits Internet film producers Rhett McLaughlin and Link Neal have produced more than 200 videos that have been watched by millions of online viewers. They are part of a growing number of filmmakers who are finding ways to profit off of the Internet. 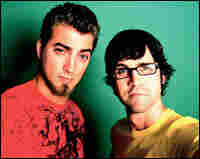 YouTube celebrities Rhett (left) and Link are part of a growing number of filmmakers who are finding ways to profit via the Internet. The duo makes sponsored videos that don't look sponsored. Courtesy of Rhett & Link hide caption 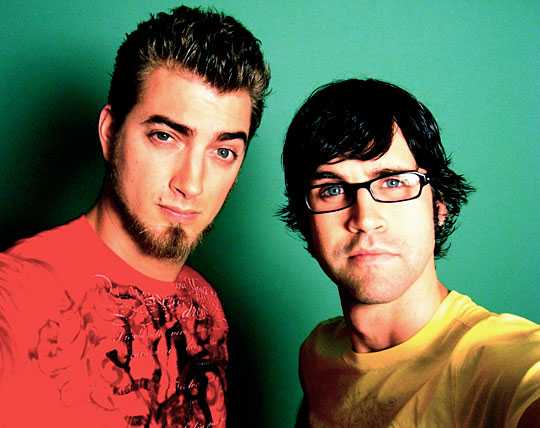 YouTube celebrities Rhett (left) and Link are part of a growing number of filmmakers who are finding ways to profit via the Internet. The duo makes sponsored videos that don't look sponsored. 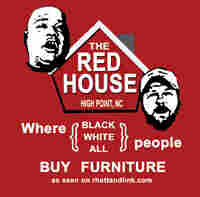 The Making Of The Red House Furniture Commercial 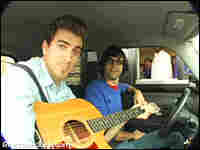 Many viral Internet videos become famous by accident, such as the YouTube hit of Susan Boyle, who sang on a British television show one night and was watched by millions online the next day.

But a growing number of filmmakers are finding ways to profit from the Internet by creating content that is professional, poignant or just plain funny.

Few are more successful than Rhett McLaughlin and Link Neal. They are comic filmmakers or, as they call themselves, "Internetainers." They have produced more than 200 videos from their basement studio in a small town in rural North Carolina. Those videos have been watched more than 16 million times.

Rhett and Link, as they're known on YouTube and on their own Web site, met in first grade.

"We were friends right from the start," says Link. "You know, looking back, you can see that you were wired to be an entertainer. Every opportunity there was to get in front of a group, Rhett and I said, 'Yeah, let's do a rap song.' "

But despite their early inclinations, neither of them thought of pursuing careers as entertainers. Instead, they went to North Carolina State University together, and they each got married and got jobs as engineers. But they still loved performing. A friend's wedding gave them another chance. Link remembers part of a song they wrote for the rehearsal dinner.

The song got a big laugh, and after the rehearsal dinner, says Link, their wives gave them the last push they needed to make a go at what they really wanted to do.

"And at that point, our wives say, 'You got a knack for that. You need to do more of that. That's what you need to be doing.' It was like the green light to say, 'Well, let's start setting our sights on something besides engineering,' " he says.

But engineering was a paying gig — making funny Internet videos was not. Rhett's father-in-law gave them free studio space in the basement of his dentist's office, and they went about making this their career. They and their families lived month to month for a while, until they hit on a plan to make sponsored videos that don't look sponsored.

One of them was the Taco Bell drive-through song, which Taco Bell paid for. Their latest viral sensation is sponsored by a company called MicroBilt. MicroBilt's clients are small businesses, and they wanted Rhett and Link to design a customer-appreciation campaign. The comedians came up with the idea to make fake local commercials for real stores. In the video for Red House Furniture in High Point, N.C., they use the touchy subject of race to comedic effect. The video has more than 1 million views on YouTube.

Some day soon, Rhett and Link may be more than "just" Internet famous — maybe they'll do an independent film project with an actual budget.

But for now, they're back in the basement, where the motivation is just to try to be funny and pay the rent — if Rhett's father-in-law ever gets around to asking for it.