Accessibility links
Town Home To Many Out-Of-Work Wall Streeters Many Ridgewood, N.J., residents built their lives as brokers, bankers and in scores of other financial jobs. But the recession has altered lives and changed the mood in the bedroom community. 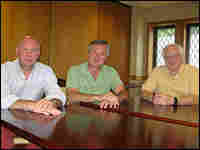 Kenneth Weimann (from left), Paul Anovick and Phillip Sorace after a Men In Transition meeting at St. Elizabeth's Episcopal Church in Ridgewood, N.J. Anovick leads the group, a weekly fellowship session that helps people adjust to life out of work. 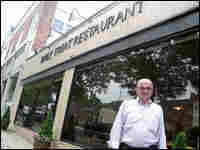 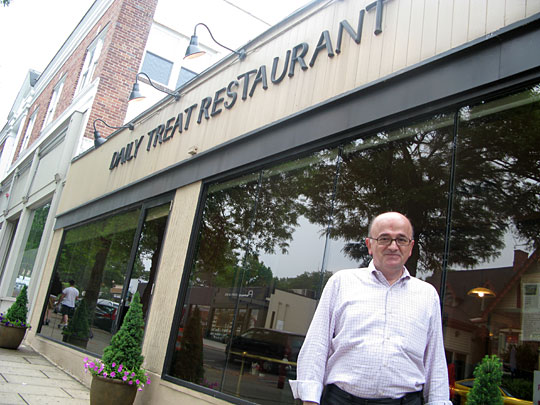 The recession has no doubt changed Wall Street.

But it has also changed the lives of the people who worked there — and the places where they live.

Ridgewood, N.J., a tidy bedroom community 25 miles north of New York City, is home to people who built their lives as brokers, bankers and in scores of other financial jobs.

Last fall, Business Week gave the town an ominous distinction, naming it one of the 20 or so American communities likely to be hit hardest by the financial collapse. That's because 1 in 6 Ridgewood residents works in finance or real estate, according to the magazine.

Ridgewood is a place NPR plans to visit in coming months, to examine how life has been altered and how the mood has changed.

It's worth describing how life has always been: Residents streamed along busy Ridgewood Avenue every morning — stopping for coffee, arriving at the commuter rail station, greeting the familiar conductor and taking the 45-minute journey into Manhattan. Then they returned home at night.

Gus Lainis has owned the Daily Treat Restaurant on Ridgewood Avenue for four decades. He knows his morning regulars well.

Lainis' regulars have so far been lucky and kept their jobs and routines.

But for one group of men in town, the routine has been altered. At rush hour on Monday mornings, for example, they no longer hear the train whistle. Instead, they hear the sounds of a church prayer at St. Elizabeth's Episcopal Church.

The church offers a weekly fellowship session called "Men in Transition" to help people adjust to life out of work and deal with the struggles of looking for fulfillment.

"Just trying to have some type of routine — but it's not the routine I want," says Kenneth Weimann, a member of the fellowship group. He's 54 years old, and spent a quarter-century as a broker and member of the New York Stock Exchange. He commuted each day on the 6:20 a.m. train like it was a religion.

Now he finds new ways to pass the time — searching for jobs and working around his house.

"You know, just keep the yard up," he says. "Just to be doing something."

Phillip Sorace is another member of the group. He was a corporate financial consultant, then the CEO of a small bank. And during the meeting at the church, he spoke about how hard times have been. He's trying to start his own financial consulting business, but he hasn't nailed down any clients yet.

"I was running around developing opportunities, making contacts, new opportunities, new things," he says, "as if I had a staff that I could turn around and say, 'You follow up on this, I want you to go after that.' Those days are over, you know? I do this by myself now."

The group, ranging in attendance from a handful to more than a dozen each week, is open only to men. The members say that helps them be more open about their fears and vulnerabilities.

At times, the men have enjoyed having room in their schedule for new things — like when a church official came to the group and asked if they would be interested in cooking a meal for local homeless men.

Sorace says the group was on board, but wanted to add their personal touch.

"Rather than just doing the casserole bit, why don't we do a barbecue for these guys? We'll get some chicken and whatever and barbecue it up, and all the accouterments that go with it."

Despite a few culinary mishaps — Sorace says one member had a misadventure making cornbread — the group learned from the day of charity at a homeless shelter.

"Not that it made us feel any better, or gee, look at a good thing we've done here," he says. "This was our way of sharing our group experience with them, then having a little bit of insight into their experience. The sad thing is, of course, that shelter has been in operation a long time before the crash and this economic recession."