Accessibility links
Fresh Violence Reported In Iran There were reports Wednesday of fresh clashes between protesters and riot police in Tehran. Meanwhile, Iran's supreme leader criticized the protesters who are challenging the results of the June 12 presidential election.

There were reports Wednesday of fresh clashes between protesters and riot police in Tehran. Meanwhile, Iran's supreme leader criticized the protesters who are challenging the results of the June 12 presidential election.

From Tehran there is word of new clashes between protestors and riot police. Today, Iran's supreme leader again criticized the protesters who are challenging the results of the presidential election. He spoke as the Guardian Council confirmed the official vote count. NPR's Mike Shuster is following developments from Dubai.

MIKE SHUSTER: The continued large police presence on the streets of Tehran has effectively prevented protestors from mounting large marches. And the police have been very aggressive in dispersing even small groups of people who intend to protest. Nevertheless, today several hundred people did manage to gather outside the parliament building, prompting a severe response from the police. They dispersed the crowd using teargas and truncheons. And some witnesses say they fired over the crowd and perhaps into it. Earlier in the day, Supreme Leader Ayatollah Ali Khamenei appeared in parliament with a firm message the sate will not yield to pressure.

SHUSTER: Everyone should respect the law, Khamenei said. We will not step one inch beyond the law, our law, our country's law, Islamic Republic's law. He added, neither the system nor the people will yield to pressure under any circumstances. At this point, though, it's fair to say that all of the pressure is coming from the state and being applied heavily on the opposition. Iran's police have also been sweeping up protest organizers, local journalists, and others deemed insufficiently loyal to the Islamic Republic. There are believed to be more than 600 now detained, including two foreign journalists.

The judiciary considers many of them rioters and it has set up a special court to deal with them. We will teach them a lesson, one official has been quoted as saying. Many protestors have accused the street militia known as the Basij of carrying out much of last week's nighttime violence. But the government is mounting a concerted campaign to convince the nation it was outside powers, using the CIA and British and Israeli covert operatives, that have been responsible for the violence in the streets. State controlled television has been broadcasting what it calls confessions of people who participated in violence. Like this woman who said her son took part in the riots.

Unidentified Woman: (Through Translator) My son wanted to have power and show that he could take power and use it against his own country and his fellow countrymen. This is all because of an atmosphere created by the BBC in Iran. He was influenced by this channel.

SHUSTER: In another confession, a young woman said she was influenced by the Voice of America and the BBC. But when she went to the demonstration, she saw many of the protestors doing the rioting and sabotage. Despite this pressure on the opposition, some prominent Iranian figures continue to speak out. Zahra Rahnavard, the wife of Mir Hossein Mousavi, called on the government to release the detained protestors. In a statement issued on a local Web site, she compared the situation in Tehran to martial law. Mousavi himself has not been seen in public in nearly a week. And he has not communicated extensively with his followers. The well-known human rights advocate and Nobel Peace Prize winner Shirin Ebadi told the Al Jazeera English satellite TV channel that she wants a new election.

Ms. SHIRIN EBADI (Human Rights Activist; Nobel Peace Prize winner, Iran): (Through Translator) People have been enjoying their legitimate right to rally peacefully and quietly. And that is their right, according to the Iranian constitution. And no one can block the people from their rights. The results of the election should be annulled. A new election should be held under the supervision of international institutions. The United Nations should be part of this in order that the situation becomes calm.

SHUSTER: Although the police have succeeded in blocking protest marches and rallies, many people continue to participate each night in a kind of housebound demonstration.

SHUSTER: From 10 o'clock on, people in many neighborhoods of the city gather on their roofs to shout, God is Greater, as well as political slogans in a collective display of continuing dissent. Mike Shuster, NPR News, Dubai.

Iran Supreme Leader Vows Not To Bow To Protests 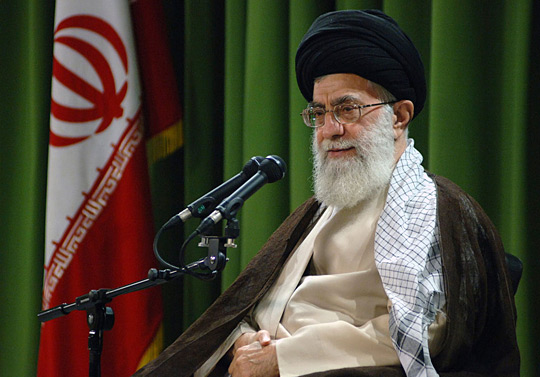 Office of the Supreme Leader/AP 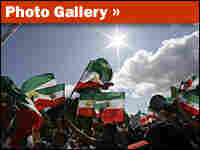 The World Reacts To Iran

Iran's supreme leader said Wednesday that the government would not give in to pressure over the disputed presidential election, effectively closing the door to compromise with the opposition.

"Neither the system nor the people will give in to pressures at any price," Ayatollah Ali Khamenei said in a meeting with lawmakers Wednesday.

But the wife of opposition leader Mir Hossein Mousavi was defiant, saying protesters refused to buckle under a situation she compared to martial law.

Three witnesses said hundreds of protesters gathered in a square next to the parliament building in defiance of government orders to halt demonstrations demanding a new presidential election. They said police beat the protesters with batons, fired tear gas and shot in the air. Some demonstrators fought back while others fled to another Tehran square about a mile to the north.

Amateur video showed young men and women throwing rocks and pushing barricades, one blazing, in the street. Others shouted, "Death to the dictator!"

Severe restrictions on reporters made it almost impossible to independently verify the video, as well as other reports on demonstrations, clashes and casualties. Iran has ordered journalists for international news agencies to stay in their offices, barring them from reporting on the streets.

Mousavi's Web site called the protest independent and stated that it had not been organized by the reformist candidate.

Mousavi's wife, Zahra Rahnavard, a former university dean who campaigned beside him, said on another of his Web sites that his followers had the constitutional right to protest, and that the government should not deal with them "as if martial law has been imposed in the streets."

She called for the release of all activists and others arrested at protests.

In his remarks on state television, Khamenei was adamant. "On the current situation, I was insisting and will insist on implementation of the law. That means we will not go one step beyond the law," he said.

Also Wednesday, Iran said it was considering downgrading ties with Britain, which it has accused of spying and fomenting days of unprecedented street protests over the vote. Iran expelled two British diplomats Tuesday. British Prime Minister Gordon Brown announced that two Iranian diplomats were being sent home in retaliation.

Mousavi claims that hard-line President Mahmoud Ahmadinejad stole the June 12 election through massive fraud. He has called for annulling the results and holding a new vote.

Mousavi supporters have flooded the streets of Tehran and other cities on a near-daily basis since the election, massing by the hundreds of thousands in protests larger than any since Iran's 1979 Islamic Revolution. Security forces initially stood by and permitted the demonstrations.

Khamenei said in a stern sermon broadcast to the nation Friday that Ahmadinejad was the legitimate winner. He told opposition supporters to halt their protests and blamed the U.S., Britain and other foreign powers for instigating unrest.

The government then ramped up both the use of force and its rhetoric, beating protesters, firing tear gas and water cannons at them. State media say at least 17 people have been killed in the postelection unrest. Amateur footage of a woman bleeding to death from a gunshot on a Tehran street unleashed outrage at home and abroad.

President Obama on Tuesday used his strongest language to date to denounce the violence against election protesters, expressing outrage at "threats, beatings and imprisonments." But he stopped short of suggesting any formal action against the country.

He defended what he called the consistency of his response and attempted to explain the fine line the administration has been walking since election protests erupted: responding to the violence, but maintaining a "path" for Iran's engagement in the larger international community.

"But we also must bear witness to the courage and dignity of the Iranian people, and to a remarkable opening within Iranian society," he said. "We deplore the violence against innocent civilians anywhere that it takes place."

From NPR staff and The Associated Press