Accessibility links
Rhubarb: Reviving A Forgotten Crop Years ago, Jim Crawford of New Morning Farm noticed that rhubarb had fallen out of favor. His Pennsylvania neighbors were letting the tart perennial languish in their gardens. But Crawford has seen a resurgence in demand for rhubarb, often fueled by nostalgia.

Years ago, Jim Crawford of New Morning Farm noticed that rhubarb had fallen out of favor. His Pennsylvania neighbors were letting the tart perennial languish in their gardens. But Crawford has seen a resurgence in demand for rhubarb, often fueled by nostalgia. 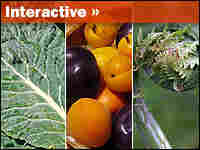 Now, the time in the show when we make you hungry. This summer, MORNING EDITION is taking a tour of the nation's farmers markets and seeing the array of fruits and vegetables that could end up on our plates.

NPR's Jennifer Ludden went to a farmers market here in Washington, D.C. for this look at an old-fashioned favorite: rhubarb.

JENNIFER LUDDEN: Rhubarb looks something like celery, but its big firm stalks can be green or red. Jim Crawford of New Morning Farm has been growing this vegetable in Pennsylvania for nearly four decades. And long ago, he even started buying it from his neighbors. He noticed this tart-tasting perennial was languishing in their gardens, unharvested.

Mr. JIM CRAWFORD (Owner, New Morning Farm): It sounds funny, but it was kind of common that people seemed to have that attitude about rhubarb.

Mr. CRAWFORD: Yeah, dismissive, right. And then, of course, when they got a $1.60 a pound for it, they said, hey, you know, I think this stuff is worth something.

LUDDEN: In recent years, Crawford's seen a resurgence in demand for rhubarb, often filled by nostalgia, as with customer Ed Kayle(ph). He says he doesn't actually buy it a lot.

Mr. ED KAYLE: But I grew up with rhubarb, and it reminds me of my grandmother and my mother, and they made these luscious pies. I'll probably just buy it and let it rot in my refrigerator.

Mr. KAYLE: But I have aspirations, you know, to make a pie, or if nothing else, they make this killer rhubarb jello bowl.

LUDDEN: Kayle admits that sounds kind of gross, but he swears rhubarb in fruit-flavored jello makes a great buffet dish.

LUDDEN: Over at the cash registers, Janet Cadd(ph) says rhubarb makes her nervous.

Ms. JANET CADD: I don't know if I'm afraid. I've cooked everything but rhubarb, and I've never tried rhubarb. I'm afraid it'll be too sour or chewy or something.

LUDDEN: Crawford finds this a lot. So he posts a helpful hint sign.

Mr. CRAWFORD: This is the easiest thing in the world to cook. It takes about five minutes. You just chop it up and put some sweetener with it and put it in a pan with a tight lid, and in about five minutes, it just melts like butter.

LUDDEN: Crawford sweetens this with maple syrup, but sugar works, too. He likes rhubarb sauce over ice cream. He also puts rhubarb in jam, chutney and a whole array of pies - not just the classic strawberry-rhubarb combo.

GREENE: And I'm looking at a recipe right now for rhubarb pie on our website: npr.org. Seriously, it only takes a few ingredients to make this. So you should really check it out.

GREENE: You're listening to MORNING EDITION from NPR News.