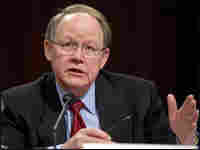 Two months ago, the director of U.S. intelligence launched what he called a 100-day plan to come up with recommendations on how to make the intelligence community more efficient.

The timeliness of background checks – especially at the FBI—has become one main focus of the plan. It takes twice as long to get an FBI clearance today than it did a year ago.

"Right now the background investigation process often takes 200 to 300 days," says Bruce Reidel, a 30-year veteran of the CIA and now a scholar at the Brookings Institution. "An investigation process that is that lengthy is going to dissuade an awful lot of young people from the work force at the FBI and other agencies in the intelligence community."

In an effort to improve the speed of the security checks, Michael McConnell, head of national intelligence, is considering a type of risk analysis to move valued candidates — such as native language speakers — through the pipeline faster.

In one scenario, the FBI would gather information by data-mining financial and other personal records to glean information about their candidates. If no red flags appeared, they would hire the applicant. A review would then take place a year or two later.

But some experts say that anything short of a full background check is risky.

"You look at credit reports, you get into telephone records, any digital data and you hope to find a call to Moscow or North Korea or something bizarre like that," says Robert Baer, an author and former CIA field officer. "The problem is that if you look back at the spy cases of the 90s, if you'd used the same risk assessment, they probably wouldn't have caught Ames or Hanssen."

Aldrich Ames worked for the CIA and Robert Hanssen was an FBI agent. Both were caught spying for the Soviet Union. They have become the cautionary tale that casts a pall over any attempts to reform the way the intelligence agency does background checks.

To even be considered for an FBI agent position, you must be between 26 and 36 years of age, have a four-year college degree and have worked full-time for three years. The FBI administers written and oral exams as well as a polygraph test. If all those boxes are checked, then current agents go door-to-door conducting a background check on the candidate – which takes time.

"People like Adm. McConnell have to make a decision," Reidel says. "What risk is it they are willing to take? The risk of one or two penetrations by hostile intelligence services versus the risk of not having the human resources with the language skills and the cultural skills that will make it able for our law enforcement services and intelligence agencies to win the war against al-Qaida."

Part of the motivation for reviewing the system is a Justice Department report released last month finding that the FBI hasn't hired enough intelligence analysts. It said the glacial pace of background checks is partly to blame.

"People would always like to apply one day and come to work the next, but that's an ideal that's unlikely to be realized," says Jeff Belkin, the acting assistant director of the FBI's Security Office. "We're always going to strive to shorten the processing times and be more effective at what we are trying to accomplish so at the end of the day, we're getting more of the result we want, which is simply trustworthy employees."

According to FBI figures, less than 20 percent of the people who apply for jobs at the agency actually make it through the process. It is a tiny number when you consider the FBI is desperate to beef up its ranks to help it fight terrorism. McConnells' recommendations are expected in early July.