Accessibility links
The Nation: Iran's New Revolutionaries On June 19 after issuing his much-anticipated ultimatum to the people of Iran, the Supreme Leader showed a side of himself never before seen in public: he looked weak and pathetic. Ayatollah Ali Khamenei, the man whose mien has inspired fear and awe in millions of people, actually had a lump in his throat. He fought back tears. In less than three weeks' time, a system he had helped perfect--rule by a supreme religious leader--was showing signs of unraveling. 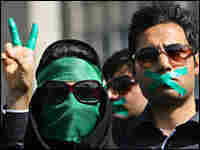 In this image made available from Mousavi's election campaign media operation Ghalam News shows supporters of opposition leader Mir Hossein Mousavi, as they listen to his speech at a demonstration in Tehran on Thursday June, 18, 2009. (AP Photo/Ghalam News.) hide caption

For those steeped in the arcane art of Khamenei-watching, June 19 holds a special significance. On that day, after issuing his much-anticipated ultimatum to the people of Iran, the Supreme Leader showed a side of himself never before seen in public: while finishing his blood-soaked sermon with a vow of martyrdom, instead of looking bold and defiant, he looked weak and pathetic. Ayatollah Ali Khamenei, the man whose mien has inspired fear and awe in millions of people, actually had a lump in his throat. He fought back tears before tens of millions of bemused and perplexed viewers because in less than three weeks' time, a system he had helped perfect--rule by a supreme religious leader--was showing signs of unraveling.

Pressure had been mounting as accusations swirled that Khamenei and the top brass of the Revolutionary Guards--working in concert with President Mahmoud Ahmadinejad--had perpetrated a vast election fraud aimed at defeating reformist candidate Mir-Hossein Moussavi and simultaneously purging the government of recalcitrant elements, beginning with the faction led by longtime Khamenei nemesis Hashemi Rafsanjani. Apparently confident of success, the alleged conspirators did not foresee the huge popular movement that took up Moussavi's cause. On June 15 close to 800,000 people marched peacefully through the streets of downtown Tehran. The numbers kept swelling for two days, until Khamenei ended the brief Tehran Spring with his ultimatum and a massive show of force.

In the past few weeks, millions of Iranians have voted with their feet, marched peacefully, experienced mass catharsis, fought pitched street battles and defied the government's edicts with increasing confidence. Before the crackdown, they got a taste of freedom and personal empowerment, and they won't soon forget it.

Khamenei's anguished sermon on June 19 was not provoked simply by the popular uprising in the streets. According to a well-placed source in the holy city of Qom, Rafsanjani is working furiously behind the scenes to call for an emergency meeting of the Khobregan, or Assembly of Experts--the elite all-cleric body that can unseat the Supreme Leader or dilute his prerogatives. The juridical case against Khamenei would involve several counts. First, he would be charged with countenancing a coup d'état--albeit a bloodless one--without consulting with the Khobregan. Second, he would stand accused of deceitfully plotting to oust Rafsanjani--who is the Khobregan chairman and nominally the country's third-most-important authority--from his positions of power. Third, he would be said to have threatened the very stability of the republic with his ambition and recklessness.

Rafsanjani's purported plan is to replace Khamenei's one-person dictatorship with a Leadership Council composed of three or more high-ranking clerics; this formula was proposed and then abandoned in 1989 by several prominent clerics. Rafsanjani will likely recommend giving a seat to Khamenei on the council to prevent a violent backlash by his fanatic loyalists. It is not clear if Rafsanjani will have the backing of the two-thirds of the chamber members needed for such a change, though the balance of forces within the Khobregan could be tipped by the events unfolding in the streets. As a symbolic gesture, Rafsanjani is said to favor holding the meeting in Qom--the nation's religious center, which Khamenei has diminished--rather than in Tehran, where it has been held before.

If there is one iconic image that has emerged from the extraordinary recent events, it is that of the masked young men and women who have appeared at all the major flashpoints. The Green Wave--the name chosen by Moussavi for his movement--is a multigenerational, multiethnic and multiclass phenomenon, though with a strong urban, middle-class accent. It is also composed of men and women in roughly equal numbers.

However diffuse the Green Wave, it has a critical component that is the linchpin of the entire movement: a class of young revolutionaries who have sustained it through difficult times. Many of these young men and women are between 18 and 24; they sport green armbands and masks, and they are fearless. Before the Revolutionary Guards stepped into the fray on June 20, the young militants of the Green Wave withstood days of unrelenting attacks by the fanatic Basij militia and the regular riot police.

What powers this new militancy? The Islamic Republic is not a dictatorship in the normal sense of the word. Its practitioners believe they are doing God's work on earth. Guiding the wayward by persuasion and coercion is among their chief tasks. Nearly every young person in Iran, particularly young women, can recount dozens of stories of humiliation and discrimination at the hands of government agents and supporters. For them, each rock thrown at the police, each hand-to-hand combat with the militiamen and vigilantes, each confrontation with the heavily armed Revolutionary Guards is not just an act of political defiance but a cathartic experience of personal liberation.

Unlike their wide-eyed parents with their utopias and romanticization of revolutionary violence, the new young revolutionaries are sophisticated and canny. They have few illusions about the magnitude of the problems facing their country or the complexities of living in a highly traditional and religious society. For example, despite the fact that they are overwhelmingly secular, their slogans mingle political and religious themes to avoid alienating the faithful. Their response to Obama's initially measured rhetoric is another sign of a new political sophistication at work: everyone understands that US meddling would be the proverbial kiss of death to the opposition's cause.

In the days and weeks to come, this infant movement will face difficult challenges. It may suffer some setbacks and reversals, but what matters is the experience it has gained. At this stage, it is doubtful that fear alone can contain the rising tide of discontent or return things to the status quo ante.