Accessibility links
Oumou Sangare: Star-Studded Sounds Of Mali With the release of her sixth album Seya, Oumou Sangare has gone from an outsider who sang about taboo subjects like polygamy and forced marriage to a major national celebrity. 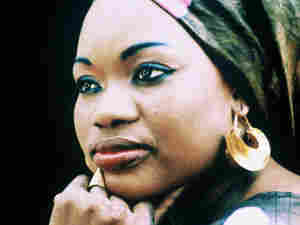 Oumou Sangare began singing at weddings and on the streets more than 25 years ago in Mali's musical metropolis, Bamako. Now, with the release of her sixth album, Seya, Sangare has gone from an outsider who sang about taboo subjects like polygamy and forced marriage to a major national celebrity.

Seya is Sangre's first album in six years and it's a landmark. It shows she's not just the finest female singer in Mali, but the African Queen of soul.

Seya is the culmination of a musical evolution that was under way when Sangare first recorded in 1989. Like Amadou and Mariam's Welcome to Mali, also released this year, Seya represents a fully mature, new type of African popular music. Neither folkloric nor fusion, it neither caters to western sounds nor ignores them. It could only be created within today's global culture. Yet every moment of Seya reflects the joyful seriousness — and serious joy — of Oumou Sangare's personality. That's why she's the Queen.

As she always has, Sangare offers lyrics well worth reading. She addresses native social tensions either through frank admonition — girls shouldn't be sold into marriage before they have breasts — or sly animal fables — dogs shouldn't get mad at turtles because they can't bite the shell. No matter what mode she chooses, Sangare sounds a bit more polished, a bit more precise and at ease, than ever before. The sessions feature guest players including African stars like drummer Tony Allen and guitarist Djelimady Tounkara as well as American horn veterans Fred Wesley and Pee Wee Ellis. But nobody takes over a tune; the Queen commands seamless integration.

Like many African performers who establish an international career, Sangre has become almost a one-woman industry at home. She's involved in charities, car imports, running a hotel and being a full-time fashion plate. The title song is all about spreading fun around, being sexy and selecting fabric and clothing designers.

Oumou Sangare has earned the right to celebrate her stardom. Besides, she sounds humble in the face of good fortune and evokes community far more than ego. But where do you go from the top? What comes after the big time? Seya presents masterful music and a superb summation of her achievements. But Sangare's greatest challenge will be to find the next step.