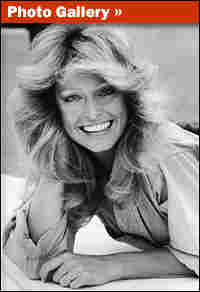 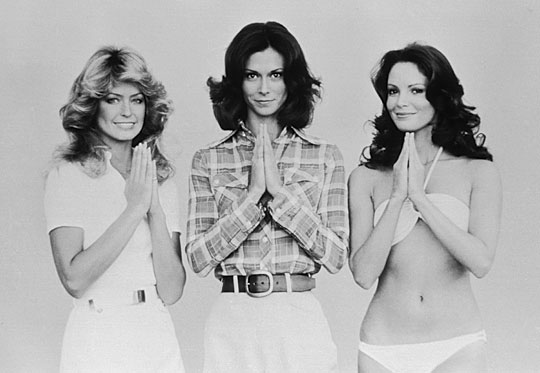 Farrah Fawcett (from left), Kate Jackson and Jaclyn Smith of the television program Charlie's Angels, in 1977.

Actress Farrah Fawcett died in a Santa Monica, Calif., hospital Thursday after a two-and-a-half year struggle with cancer. She was 62.

Forever known for her starring role as private investigator Jill Munroe on the 1970s ABC television series Charlie's Angels, Fawcett drew worldwide attention with a 1976 poster, in which she famously posed in a red one-piece swimsuit against the backdrop of a tattered blanket.

Before the poster, the aspiring actress' career had mainly consisted of a few TV cameos and commercials for beauty products. But the pinup-girl poster, which sold 12 million copies, changed all that.

By the fall of 1976, Fawcett was appearing weekly on television with Jaclyn Smith and Kate Jackson as one of Charlie's Angels, three stunning women who used their feminine prowess to fight crime in a man's world.

Smith says there was instant chemistry on the set. Fawcett kept them laughing, despite the fact that they had no idea how hard it was to shoot a TV series.

"That was the beauty of Farrah," says Smith. "There was this incredible sexiness and worldliness, but she was like a little girl."

When the show premiered, no one anticipated the kind of success it would have: The Angels graced the covers of Time magazine and TV Guide, introducing the nation to what critics called "jiggle TV."

Though Fawcett was the breakout star of the series, she broke her contract with the studio and left the show after only one season.

Other television and stage roles followed. In 1984, Fawcett starred as a battered wife in the made-for-TV movie The Burning Bed, a role that garnered her an Emmy nomination. She was also nominated for Emmy Awards in 1989 for the TV miniseries Small Sacrifices and again in 2003 for her role in The Guardian. In recent years, she opened up about her struggle with cancer in the TV documentary Farrah's Story.

Fawcett was married to Lee Majors, the star of TV's The Six Million Dollar Man, from 1973 until 1982. Soon after the split, Fawcett moved in with actor Ryan O'Neal, with whom she had a son in 1985. Fawcett was romantically involved with O'Neal until her death.

Outside of television, Fawcett caused a stir in hair salons in the late 1970s and early 1980s with her iconic wavy hairstyle. New York hair stylist Nick Arroja remembers the Farrah phenomenon well.

"It was kind of big and flicky and soft and feminine and sexy," he says.

Newspapers and women's magazines printed careful step-by-step instructions on exactly how to get the "Farrah flick."

"You would definitely have to say that Farrah Fawcett's hair was iconic, and it was a major statement," Arroja says.