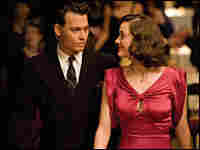 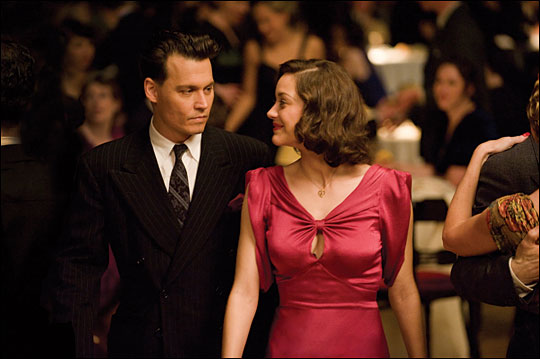 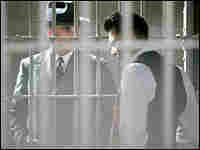 FBI agent Melvin Purvis (Christian Bale, left) vows Dillinger will never leave his cell alive — unless it's on the way to his execution. Universal hide caption 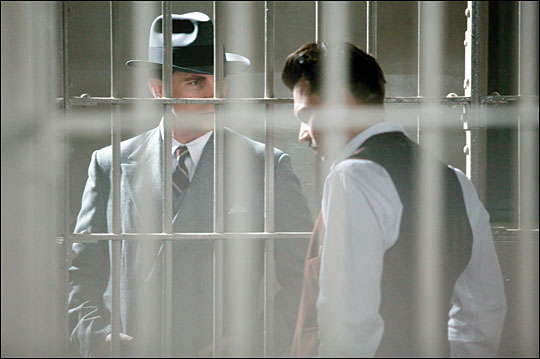 FBI agent Melvin Purvis (Christian Bale, left) vows Dillinger will never leave his cell alive — unless it's on the way to his execution.

It was the movies that killed John Dillinger — America's Gangster No. 1 until he was gunned down outside a Chicago theater, after taking in a picture one hot night in 1934. Now the movies have brought him back to life in Public Enemies, with Johnny Depp in the starring role.

Simultaneously an art film and a crime film, this is the story of the famous Depression-era bank robber and his doomed love affair with a beautiful woman, played by Oscar winner Marion Cotillard.

The title Public Enemies echoes of one of the iconic gangster films of the 1930s — The Public Enemy, which starred James Cagney as a hooligan so hard-boiled that he shocked America by squeezing a grapefruit into his girlfriend's face.

But if Cagney was all exuberant, anarchic energy, Depp's Dillinger is just the opposite. There is a formal, almost existential quality about his fatalistic portrayal of the scourge of the Midwest. That gives Public Enemies a brooding, dark-night-of-the-soul air.

Some of that quality comes from the nature of the opposition. That would be the Federal Bureau of Investigation, of course, and Melvin Purvis, its man on the ground in the Midwest. As played by Christian Bale, Purvis is an icy and implacable nemesis who keeps after Dillinger like a hound out of hell.

Director Michael Mann (Heat, The Insider) and his team have taken exceptional care to make Public Enemies feel authentic, but the film also transcends its period and exists out of time. Though the Depression was a major factor in Dillinger's career, we don't see or feel it all that much.

What we get instead is the sense of a man whose name has lasted until now. If the movies have anything to say about it, that name will last longer still.