Accessibility links
Those Achy Joints Could Be Osteoarthritis Osteoarthritis, the sometimes painful degeneration of tissue surrounding joints, is common in the aging population. The earlier it's caught, the easier osteoarthritis is to treat. 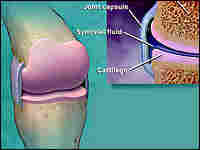 This is a healthy knee joint. Click to see how the joint degenerates when osteoarthritis sets in. Courtesy Medco Health hide caption 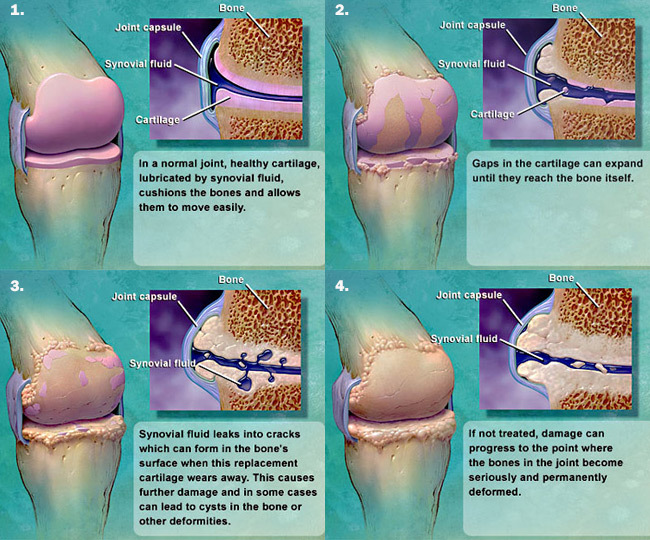 With osteoarthritis, joint degradation can worsen over time.

Learn more about signs, symptoms and treatment for osteoarthritis. 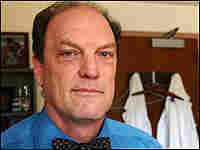 Many patients go to Dr. Robert Bunning, an internist and rheumatologist at the National Rehabilitation Hospital in Washington, D.C., complaining of joint pain that is often osteoarthritis. Jessica Goldstein/NPR hide caption 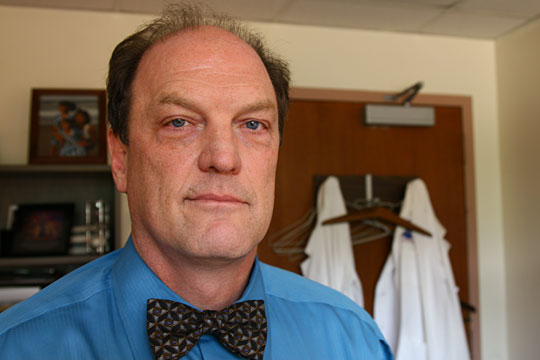 Many patients go to Dr. Robert Bunning, an internist and rheumatologist at the National Rehabilitation Hospital in Washington, D.C., complaining of joint pain that is often osteoarthritis.

A lot of boomers now in their mid-60s are riding on joints that are like bald tires and may not know it.

Osteoarthritis is an inflammation of the joints brought on by wear and tear. It's a mostly hidden condition when you're middle age, but it begins to manifest itself later in life, often as a mild stiffness or an ache that may be ignored until persistent pain draws attention to the problem. But doctors say the joint pain of osteoarthritis isn't necessarily inevitable.

About 27 million Americans, two-thirds of those older than 65, have osteoarthritis, according to the National Institutes of Health.

Osteoarthritis may occur at younger ages for some people, says Dr. Edward Lally, a Rhode Island rheumatologist, especially "if people have a predisposition, genetically or, for example, are overweight and have damaged the joints from, say, a sports injury."

Pain is common in aging joints, especially the movable ones — the fingers, shoulders, knees and hips. Some experts call osteoarthritis an accompaniment to aging. As we edge past 60, the body loses some capacity to generate and repair tissue, including the cartilage that cushions the ends of bones where they meet. The space between bones narrows, and over time, the bones no longer fit comfortably into each other, and fluid from the lining of the joints seeps into bones. Bone rubs against bone, and the joint becomes inflamed.

Because many people associate aging with pain, they may ignore the pain for too long. They are often unaware of how prevalent osteoarthritis is. But Dr. Robert Bunning, an internist and rheumatologist at the National Rehabilitation Hospital in Washington, D.C., says that pain is the very essence of osteoarthritis.

"The word arthritis means inflammation of the joint, and the signs of inflammation are pain, swelling, warmth, redness," he says.

There are about 200 joints and as many bones. They are not isolated units but a dynamic interplay of ligaments, tendons, cartilage, joint fluid and membrane that hold the skeleton together and help us move.

Any of the structures in a joint can be a source of pain, says Dr. David Hamerman, an emeritus university professor at the Albert Einstein College of Medicine. "There are so many structures within the joint that become stressed or changed or even torn with aging, including the bone beneath the cartilage and the muscles that surround the joints."

But Hamerman says the causes of osteoarthritis are known. There are both genetic and environmental factors, and they often start in early life.

"The major environmental factor is obesity," Hamerman says. "It contributes to knee osteoarthritis." Some people are born with conditions that later contribute to osteoarthritis. A congenital deformity of the hip, for example, can distort the joint of the hip and lead to arthritis.

But "osteoarthritis is more often found in persons who have injured joint structures," he says.

In fact, anything that has disturbed the natural alignment of the joints and how they function can lead to osteoarthritis, including occupations with repeated stressful motions such as bending and lifting.

Osteoarthritis isn't always painful, however — and pain isn't always osteoarthritis. People should also look out for any change in the ability to move about, noting what they could do a year ago that they can't do now, and what has changed. It's important to keep active and mobile.

At age 84, Hamerman speaks from personal experience in saying that some pain can be tolerated.

"It's occasional, sometimes motion-provoked — stairs perhaps, going up or going down, but not as a steady feature," he says.

But even when a person experiences mild symptoms, something should and can be done about it, Bunning says.

"If you're 80 years old and have a little bit of stiffness, you don't necessarily have to run off to the doctor," he says. "You can [take] over the counter [medicine] as long as you are cleared by your doctor."

MRI may not be immediately called for, nor more elaborate procedures that have become all too familiar to many boomers and athletes, including arthroscopy to repair tears, and joint replacement. Exercises, Bunning says, are effective at any age.

"There's a lot of good evidence that strengthened muscles around a painful knee, especially quadriceps strengthening, can be extremely helpful." Bunning adds, "Shoe inserts and even just proper shoes — tie shoes with a good cushion and a good sock — can help to relieve pain."

If pain persists, if your ability to move about is affected, and especially if a pain in the hip keeps you awake at night, there are also options such as steroid injections and surgery.