Accessibility links
How Should We Teach English-Language Learners? The Supreme Court last week ruled that Arizona has not violated federal laws that require schools to help students who do not speak, read or write English. The decision raises a bigger question about why these students have been so poorly served to begin with.

Listen
How Should We Teach English-Language Learners? 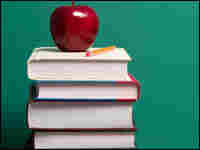 Schools have yet to figure out the best way to teach English to non-English-speaking students. Liliboas/iStockphoto.com hide caption

Last week, the Supreme Court ruled that the state of Arizona has not violated federal laws that require schools to help students who do not speak, read or write English. Despite the federal mandates, these kids often fail to do well in school. So why haven't schools figured out the best way to teach English to non-English-speaking students?

"The research certainly has in the past shown dual language programs to be the most effective," says Nancy Rowch.

Rowch oversees instruction for English-language learners in Nebraska. She swears that building on a child's native language, rather than discarding it, has proven to be the best way to help kids make the transition to English — but that's neither here nor there, because the actual programs that schools use have less to do with research than with politics and funding.

In Nebraska, for example, Rowch says school districts cannot find dual language teachers or pay for dual language programs, so the state has no choice but to allow them to use whatever they can afford, even discredited methods like "sink or swim."

"In small schools, sink or swim may actually occur. Nebraska is a very rural state, but to me, sink or swim is like saying, 'To teach children to read, we're just going to throw them into an environment but we never instruct them how to read,' " says Rowch.

Again, based on the evidence, she says, dual language or bilingual instruction is the answer.

"A dual language program allows both English, and in the case of Nebraska, Spanish, speakers to learn both languages together," Rowch says.

As in many parts of the nation, the non-English-speaking population in Nebraska has exploded, creating enormous problems for schools that have really struggled to keep these kids from falling behind in science, math or history while they learn English. And that's key, experts say: that they learn English so they can function.

The politically charged question is whether the goal should be to teach a child English as quickly as possible or let him learn English more gradually while maintaining his native language so that he grows up bilingual.

"There's nothing wrong with a kid being bilingual," says Rob Toonkel of U.S. English. The group opposes any program that delays a child's transition to English-only classrooms.

"The problem with the old bilingual ed was that it didn't have a goal. It said kids would become English proficient at some point — not [in] three years or five years or seven years," Toonkel says.

It means these kids are often stuck in so-called dual language or bilingual maintenance programs indefinitely, says Toonkel. Another problem, he says, is that schools have gotten little or no guidance from states, the federal government or the courts.

All the courts have said is that "schools must take appropriate action to help students overcome language barriers," Toonkel says.

"You're seeing it in places in the South and Midwest suddenly going 'OK, we have to look at these programs and figure out what's best because we have a lot of people moving here," Toonkel says.

No Child Left Behind

Right now, the little guidance states are getting from the federal government is wrapped up in No Child Left Behind, the sweeping eight-year-old law that evaluates schools based on students' academic progress and test scores.

James Crawford, a longtime proponent of bilingual education and president of the Institute for Language and Education, says NCLB poses another hurdle for kids who don't know English.

"What NCLB does is attach very high stakes to tests that are given primarily in English," Crawford says. Consequently, schools are throwing kids into English-only classrooms too quickly, because they "are so worried about the consequences of not making adequate yearly progress for English-language learners," he says.

In other words, says Crawford, instead of adopting proven programs that help non-English-speaking students do well in school, we're back to sink or swim.

"It's ironic that as more research comes showing the benefits of bilingual ed, we're seeing a political trend toward minimizing the use of bilingual ed," Crawford says. Why? "It's tied up with the immigration debate. It's also a reflection of the kind of culture wars we've had."

As long as that's the case, Crawford says, politics will trump the research and continue to put more than 5 million students classified as English-language learners at risk.