Accessibility links
Afghans In Country's North Are Calm, But Wary While northern Afghanistan seems far away from the violence in the country's other regions, tensions are mounting among ethnic factions there. The upcoming presidential election could bring more trouble to the region as ethnic groups support their own leaders. 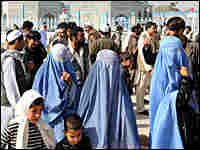 Afghan men and women walk near the Ali Shrine in the northern town of Mazar-e-Sharif in Balkh province on March 20. Shah Marai/AFP/Getty Images hide caption 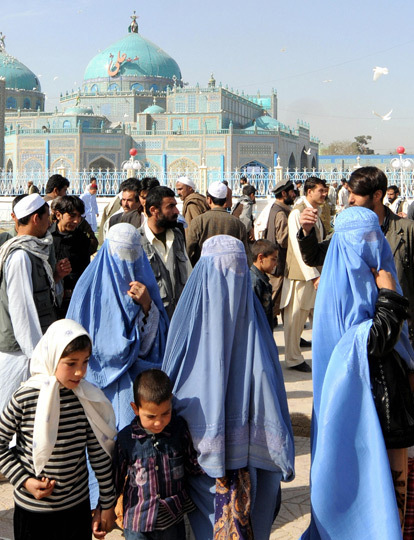 Afghan men and women walk near the Ali Shrine in the northern town of Mazar-i-Sharif in Balkh province on March 20, 2009.

In Afghanistan, the bulk of the violence occurs in the country's south and east. In the north, it's a different story: The area is relatively calm. But there are simmering tensions among the ethnic groups in the north, which human rights workers say could increase ahead of Afghanistan's upcoming presidential election.

As travelers cross Afghanistan's Hindu Kush mountain range and start heading north, the war that's being fought in the rest of the country begins to seem a long way away.

This is particularly true on the busy streets of Mazar-e-Sharif, the largest city in the region. It's an energetic place without the huge blast walls that dominate the landscape of Kabul, Afghanistan's capital.

The people in Mazar-e-Sharif and the surrounding region are an ethnic mix of Tajiks, Uzbeks, Hazaras and Turkmen, reflecting the countries that border this area of Afghanistan. But there aren't a large number of Pashtuns — the predominant ethnic group in the rest of Afghanistan.

Reza Husseini, an archaeologist in Mazar-e-Sharif, says that's a good thing. He equates the Pashtuns with the Taliban.

"In a place that you see the Pashtun people, even in a small village, in a big district or big province, you will see al-Qaida there," Husseini says. "You will see narcotic drugs there. You will see everything — the attacks, everything."

Husseini adds that many people in the north feel bad for those suffering violence in other parts of the country, but question why they accept the Taliban.

Certainly, the people in northern Afghanistan have reason to fear the Taliban — violence was widespread in the late 1990s as the Islamist group fought for control of the area. At one point in 1998, Taliban fighters targeted the ethnic Hazaras, who are Shiites and are considered heretics by the Taliban. Conservative numbers put the death toll at 2,000.

Nagafeez Zardar, a Hazara, was in Mazar-e-Sharif at the time.

"I know many people who were killed by the Taliban," Zardar says. "They were my friends. We discovered a mass grave. We took out eight bodies and buried them separately."

Zardar recalls how Pashtun friends hid him and his family in their homes. Because of that experience, Zardar says he doesn't harbor any ill will toward the Pashtuns. But he knows that memories last a long time in the area. While many people in the north tolerate the Pashtuns, Zardar says there isn't a lot of trust.

Pashtun Stronghold In Nearby City

An old blind man sits cross-legged, hands open to any offerings, outside the Shrine of Khwaja Parsa in the city of Balkh, a half-hour drive from Mazar-e-Sharif. Balkh is known as the "mother of cities." Alexander the Great used it as his base in 329 B.C. Genghis Khan virtually destroyed it in the early 13th century.

Today, Balkh is a Pashtun stronghold, one of the few in northern Afghanistan. It's where the Taliban found refuge during the last days of its regime in late 2001.

Bollum Resool runs a pharmacy on the main street of Balkh. He remembers how bad things were here after the Taliban were overthrown.

"In 2001, there were problems between the Pashtun and all the other groups," Resool says. "But now it's getting better, little by little."

But Khozi Mohammed Sahmy, head of the Afghanistan Independent Human Rights Commission in Mazar-e-Sharif, says the run-up to the Aug. 20 presidential election could bring trouble.

"Every ethnic group is supporting its own leaders," Sahmy says. "It won't take much to spark trouble."

Sahmy says he does not want to return to the days of feuding warlords.

"It's always like we go one step ahead and two steps backward," he says. "That's what happens here."

People here also are increasingly worried about the deteriorating security situation in the neighboring province of Kunduz. Taliban insurgents appear to be making inroads there. If that spreads, there are fears that the calm here in Mazar-e-Sharif could evaporate.