Accessibility links
Taxing Imports, One At A Time Every time a car or a T-shirt or an apple comes into the U.S., it's taxed. But determining how much is quite complicated. Import specialists, like Bret Ewing in Seattle, use an old, enormous book to figure it out. 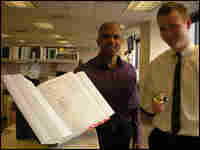 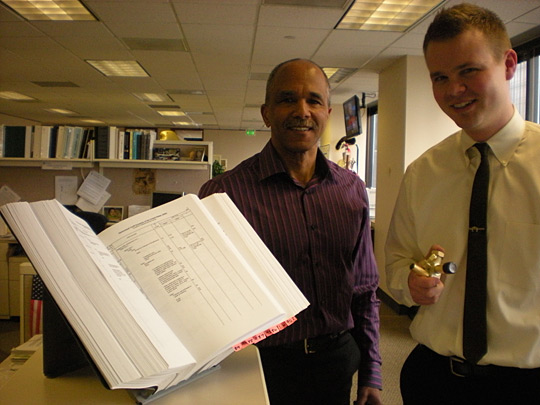 Bret Ewing (right) and Jim Henderson, import specialists in Seattle, stand with the Harmonized Tariff Schedule Of The United States.

Every time a car or a T-shirt or an apple comes into the U.S., it's taxed. And determining how much each product gets taxed is quite complicated.

An old and enormous book reveals how much — and the people who know and understand it are called "import specialists."

Bret Ewing, one of these specialists at the Port of Seattle, has dealt with a "lot of issues" in categorizing wood flooring. He debates whether it falls under category 4409 or 4412, which depends on its construction.

Ewing has a cubicle, a computer and the enormous book called The Harmonized Tariff Schedule Of The United States. He checks that international importers are declaring their goods in the correct way. Big importers like Target or Wal-Mart have to declare everything, and the rates the goods are taxed vary. A toy might be taxed 3 percent on its appraised value, a car 5 percent — all depending on the category it falls under.

It may seem easy, but the massive book that classifies merchandise has 99 chapters.

"I'd say it's kind of like our bible," says Jim Henderson, who works with Ewing. "This is what we work from."

Every day, these guys take an item that has come into the country, flip through the book and rule out every category it is not.

An iPod docking station sits on Ewing's desk. But categorizing it is tricky. He knows it's not an orange, not livestock, not an optical instrument, not a toy. So he can rule out a lot of the book — 84 chapters of it.

"I would first look at Chapter 85," he says. "Beginning of Chapter 85 is for electric motors. That's not right ... shavers, hair clippers ... loudspeakers."

Ewing continues to tick through the options. Is it a loudspeaker? Or maybe a battery-operated device? It has a battery, but it also plugs in. Is it an alarm clock? Well that's not probably why you buy it, but it does have one.

Ewing finally settles on a "reception apparatus for radio broadcasting, whether or not combined in the same housing with sound-producing apparatus or a clock."

And this reception apparatus is not slapped with an import tax.

Economists, for the most part, don't like this whole idea. They would like to see the book go away. They argue tariffs just make everything more expensive overall, for everyone. Getting rid of the tariffs would create even competition.

Labor groups say that tariffs are imposed because a country doesn't allow unions. Or environmentalists will say an industry pollutes. And the textile lobby will say, "We need tariffs on Indian textiles; they're killing us." The American pencil lobby will say the Chinese aren't playing fair.

The tariffs are generally in place to protect some American industry that is threatened by a foreign industry. It's designed to encourage free trade — and protect American industries at the same time. And it's a complicated balance.

Import specialists like Ewing just try to do right by the book.