Accessibility links
Lobbyists Jockey For Position In Health Care Debate As Congress this month began its legislative work to overhaul health care, the hearing room was packed with lobbyists. Billions of dollars are at stake, and interest groups are pouring millions into Capitol Hill to make sure their concerns are represented. 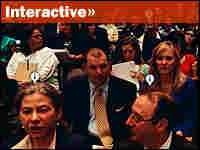 We've started to identify some of the 200 people who were in the room when the health care debate kicked off. hide caption

Interactive: Can You Help Figure Out Who These People Are?
toggle caption

Earlier this month, lobbyists trooped in to watch as the Senate Committee on Health, Education, Labor and Pensions began working on a health-care overhaul — the first congressional panel this year to move so far.

We wanted to know how many lobbyists go to these important sessions, what they hope to influence and, most basically, who they are. We've already begun to identify them; you can see the panoramic shot by clicking on the image at left.

In the front row, over to the right, sat Sharon Cohen, head of the health-care practice at the Podesta Group, one of Washington's biggest lobby firms. She could have watched on C-SPAN, which televised this session. But she didn't.

"When you're in the room, the phone is not ringing, you're not looking necessarily at your e-mail — though everyone has [BlackBerrys] these days. But it allows you to focus much more than if you're sitting at your desk," she said later.

Most of Cohen's clients are drug companies, most notably Novartis, Genentech, Genzyme and Novo Nordisk. She also represents a large hospital, the Children's National Medical Center in Washington, D.C., and the Alliance for Quality Nursing Home Care, a coalition of nursing home operators.

Cohen later told us that, as she sat in that first health care session, she was listening to the senators position themselves in their opening statements, but "it's really about the amendments, in terms of how they're being discussed and the ultimate votes on those amendments." The committee didn't get to any amendments that day. The 22 opening statements consumed morning and afternoon sessions.

Also in the front row, several chairs to the left of Cohen, was Marsha Simon, head of a three-person boutique lobbying firm.

Making Sure Legislators See You There

The popular image of health-care lobbying might involve producers of drugs and high-tech medical equipment, but Simon's clients are also in the mix: "Companies that are involved in implementing the health system. They do health information, they're firms that handle, process claims in the Medicare program, they do appeals when a Medicare beneficiary is turned down by a managed care plan and the like."

Way in the back of the hearing room, sometimes leaning against the wood paneled wall, was Richard Miller, longtime lobbyist for the American Chiropractic Association. He says it's important that the chiropractors keep on top of the health care overhaul legislation — and also take pains to make sure that senators and staff see them doing that, because the chiropractors are small dogs in a big fight.

"I mean, there are some very big picture issues here, some very large players," Miller says. "We have a fairly active and aggressive lobby, but in the grand scheme of things, the cost of this legislation could easily be over a trillion dollars a year."

The fact that these lobbyists came to the committee meeting makes perfect sense. Every citizen has a constitutional right to petition the government. And Congress is attempting to overhaul an industry that affects literally everyone.

But add all lobbyists together, and throw in the campaign money that comes along with lobbying, and the problem becomes evident: It's gridlock.

The Threat Of Being Immobilized By Interest Groups

President Obama certainly sees Washington's lobbyists as an obstacle to change. He's tried limiting their access to the executive branch, but that runs into the constitutional question. And in any case, it's really up to Congress to set the lobbying rules for Capitol Hill.

Julian Zelizer, a professor of history and politics at Princeton University, says Congress can be immobilized by powerful interest groups.

"It's extremely hard, because every time a legislator genuinely wants to craft a new policy, they have to contend with very powerful interest groups who threaten, who cajole," he says.

Numbers tell the story of gridlock as well.

Between 1998 and 2008, the number of registered lobbyists on health care more than doubled, to 3,627, according to the Center for Responsive Politics. The statistic doesn't include players who don't engage in lobbying as defined by federal law — among them, grass-roots organizers, producers of TV campaigns and former members of Congress who remain in Washington as senior advisers to corporate clients.

Looking For A Return On Investment

Spending on lobbying jumped even higher over the past decade. Organizations lobbying on health care spent $484.4 million in 2008, more than two and a half times the spending in 1998.

Why spend so much? Three words: return on investment. While a drug company might spend a few million dollars lobbying, it stands to gain, or lose, billions in the outcome.

One big example: the 2003 Medicare drug legislation, under which Medicare began covering prescription drugs. One provision shifted poor, elderly consumers from Medicaid to Medicare — more bluntly, from a program where the government can negotiate with drug companies over prices, to a program where the new legislation prohibited such negotiations.

Most estimates find that the Medicaid-to-Medicare shift was worth billions of dollars for the drugmakers. Meanwhile, the Center for Responsive Politics puts the pharmaceutical industry's 2003 lobbying expenditures at $126.1 million.

That would seem to be a bargain.