Accessibility links
For U.S. Intelligence, Few Clues To Iran Turmoil Everyone in Washington has an opinion about what has gone on in Iran and what U.S. policy should be in response. But the real experts say no one really knows what is going on, least of all U.S. intelligence analysts who have few reliable assets on the ground. 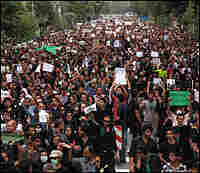 Protests of the June 12 presidential election are reportedly continuing in Iran, but U.S. intelligence agencies know little about what is happening on the ground due to a lack of staff in the country. Sipa via AP hide caption 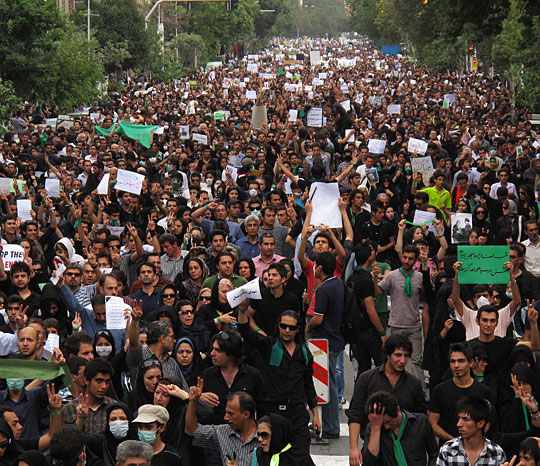 Protests of the June 12 presidential election are reportedly continuing in Iran, but U.S. intelligence agencies know little about what is happening on the ground due to a lack of staff in the country.

Generations of Western spies have tried, and mostly failed, to decipher events in Iran.

Martin Indyk was among them. Working for Australian intelligence 30 years ago, Indyk, who has since served as a U.S. diplomat, regaled a recent gathering at the Brookings Institution with his efforts to crack Iran in 1979.

"I was the Iran assessments officer during the revolution and produced an assessment which said the shah was finished," he said. "And my bosses, under the heavy influence of the CIA, changed the assessment to say that the shah was likely to face a few problems, but that, quote, 'The sun would never set on the peacock throne.' "

Of course, the sun did set that very year on the throne of the Persian emperor, and since then, Western intelligence on Iran has, if anything, become worse.

The CIA was forced to close its station when the U.S. Embassy in Tehran shut down. For a while, the agency ran a hub out of Frankfurt, from which CIA officers could travel to meet contacts and try to steal secrets about Iran. More recently, it based a collection office in Los Angeles to take advantage of the Iranian expatriate community there.

None of it, however, is a substitute for having CIA staff actually on the ground, says former CIA official Bob Baer.

"We know virtually nothing about Iran. It's very easy to get misled when you collect intelligence through occasional sources, who travel out rarely, that are almost impossible to vet," Baer says. "Your intelligence by force is bad."

Another former CIA official says the agency does have sources inside the country: Iranians who have agreed to pass on to U.S. intelligence what they see and hear.

Recent years have seen the advent of Facebook, Twitter and YouTube, and allowed anyone with an Internet connection to watch the crackdown this week by Iranian security forces against pro-reform demonstrators. But such tools are next to useless for providing insights into the current political crisis.

What the CIA would like to know, for example, is more about the power struggle under way among Iran's leading mullahs, or for that matter, says Baer, Iran's nuclear program.

"God knows we've tried every way in the world. But the fact is Iran is still a police state," he says. "And it's very difficult to collect on a police state, especially a police state that puts out so much propaganda and disinformation."

Baer says disinformation is a major obstacle to working with another possible source of information: Iranian expatriates and dissidents.

Paul Pillar, the CIA's former top analyst for the Middle East, agrees. He says the CIA always tries to milk exiles for intelligence.

"You do so with a couple of very big grains of salt that you have to keep in mind. One is how dated these people's information often is. And the other big thing is what kind of ax they have to grind," he says. "We've just had a big set of experiences with Iraqi exiles, and we know how that went."